2018: Looking Forward to Helping People to Help Themselves and Others 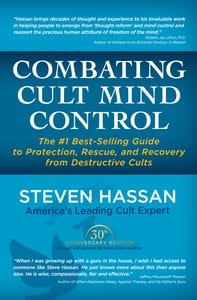 For over forty years, I have endeavored to help people understand my own cult experience- being recruited into a front group of the Moonies in 1974 while a student at Queens College in New York.  This year, on November 18th, 2018, my book Combating Cult Mind Control will be 30 years old.  That hardback volume was originally published with the British spelling, Combatting, and featured a bald-headed man with a padlock and chain around his bald head.  I fought with my then publisher and told him the cover was a total turn off for all current and former members of destructive cults- and I was right.  When we released the paperback in 1990, we made the cover just words, and it took off and became a best-seller, and was published in many languages including German, French, Spanish, Japanese, Italian, Polish, Czech, and others.  I bought the rights back to my book from the publisher in 2014 and published the new volume with significant updates in 2015 and 2016 and published it as an e-book, as well.  I plan to produce an audiobook in the first few months of 2018.

In 2000, I self-published the hardcover Releasing the Bonds: Empowering People to Think for Themselves. Due to publishing delays, we missed the major media opportunities preceding the Millennium and the book came out in February.  It was a labor that took over seven years but it was the first explication of the approach I developed after deprogramming and exit-counseling.  I learned complex systems theory from my then brother-in-law, MIT physicist Yaneer Bar-Yam, and developed an agent-based ethical influence model. Yaneer founded the New England Complex Systems Institute in Cambridge, Massachusetts, and Freedom of Mind is a proud affiliate of this prestigious educational institute.  I have been honored to speak at a number of their conferences and this summer, there will be another major international conference.  I intend to speak about a complex systems approach to dealing with terrorist cult groups. 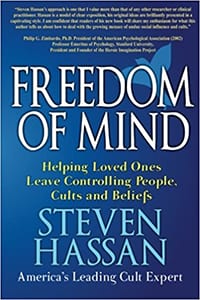 In 2012, I decided to publish a paperback edition using the core concepts within Releasing the Bonds and published Freedom of Mind: Helping Loved Ones Leave Controlling People, Cults and Beliefs.  This book is the more up to date book than my second one, more internet oriented and aimed at one-on-one relationships. It, too, is available as an e-book.  An absolutely essential component of my approach is educating people about social influence in its negative applications: undue influence, unethical hypnosis, use of social psychological principles to deceptively recruit and indoctrinate people into authoritarian, closed relationships and systems.  These induce a dependency and undermine independent, critical thinking and decision-making.

In the coming weeks, I intend to share in my blog erroneous beliefs and show why they are incorrect.  By dispelling myths and misattributions, it is my hope to demystify my unique approach to empowering people to be their real selves and operate more with an “internal locus of control” rather than defer to some outside authority.  I hope to be developing online webinars and other ways to share my knowledge and experience so more people will learn how to ethical help others who are stuck within a closed BITE model system of beliefs and practices. To learn more about my doctoral research on the effects of undue influence, please visit www.freedomfromundueinfluence.org.

Check out my new video that discusses the BITE Model & Influence Continuum: