4th Generation Warfare and The Christian Right: A Discussion With James Scaminaci III 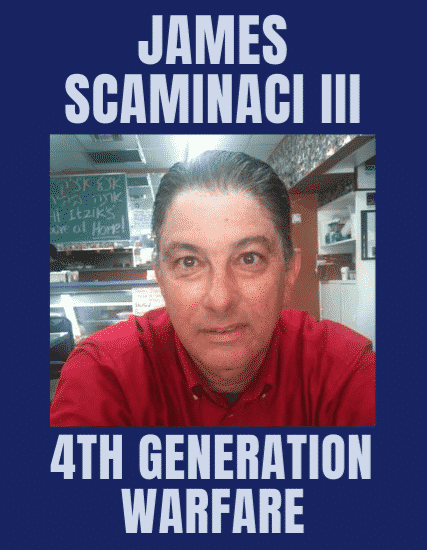 When I was researching to write The Cult of Trump for Simon and Schuster, I was advised to read Dr. Scaminaci’s academic writings on Fourth Generation Warfare (4GW). What is it? It is a form of psychological warfare. In the intelligence world, it is known as an advanced form of psy-ops (psychological operations). It was first described in writing by an American military strategist named William S. Lind in the 1980s. Its aim is to delegitimize leaders and institutions and to sow distrust, confusion, disorientation in order to ready people to be mind controlled by an authoritarian leader. It is a strategy that is well known and practiced, by not only American intelligence, but believed to be practiced on their adversaries by countries like Russia, Iran, China, North Korea, among others. It is also part of the psychological warfare practiced by authoritarian cults whose leaders desire power, money and sex.

William Lind was the director of cultural conservatism at the Free Congress Foundation which was the strategic think tank of the Christian Right headed up by Paul Weyrich. It was one of Weyrich’s goals–to erode and eventually seek to destroy the separation of Church and State in the United States. They wish to advance their version of Christianity and install it into the justice system, enforcing policies which would undermine “secularism” and atheism.

The aim of the Christian Right has been to delegitimize an entire society’s institutions including its governing philosophy, mainstream political parties, secular and inclusive vision of the Constitution, and even broad classes of American citizens.

4GW employs a different set of psychological tactics than traditional propaganda methods. It goes beyond physical warfare and expands into mental and moral aspects, breaking down the bonds of social trust. It seeks to increase chaos, sow distrust and stokes fear and hatred to other Americans who seek to support the Constitution and rule of law and order. American justice depends on checks and balances. Unfortunately, we have learned in the past years, that our system has been infiltrated and corrupted from within and outside.

So, how does one destroy the United States’ world sovereignty without military attack? Putin sought to use “active measures” to infiltrate and destabilize faith in American and democracy. Russia made alliances with the Christian Right, Libertarians, and White Power leaders to turn America away from democracy towards authoritarianism.

The Christian Right’s goal is to delegitimize the democratic party as legitimate citing their progressive values of liberalism, multiculturalism, and diversity. Media entities like Fox, religious television networks, talk radio, Infowars, Breitbart, and Sinclair are making a deliberate effort to incite fear and hatred. They want people to give up and not vote at all or join the Cult of Trump and vote for him and his Republican sycophants. If they can’t get people on their side, they seek to turn people against each other and give up and not vote.

Recently there has been a vast effort to recruit people into QAnon and convince people that all Democrats are radical socialists who are pedophiles and are part of a Satanic cabal. The amount of certainty, lying, repetition, and projection is programming everyone. I did a BITE model analysis of QAnon as a destructive cult. The only protection is understanding the strategy and their techniques, along with widespread education. It is interesting to hear them touting freedom of expression, while they sue anyone who wants to write a tell-all book about Trump’s psychological problems and Russian interference.

With the recent Democratic and Republican conventions, there has been quite a bit of media coverage of political and social issues. And lots of conflict in that arena. Social media has been a source of radicalization and a hotbed of disinformation. And in the United States, we have many open social media platforms that are quite late at trying to protect the public. They have made it so easy for bots and troll farms to infiltrate social media with the purpose of promoting propaganda and conflict.

Sadly, the country is in grave danger. The problem will not be solved by simply voting Trump out of office as he has already primed people to believe the election is rigged. Even though Trump claimed victory in 2016, he is still claiming there were millions of dead people who voted for Clinton, with no evidence to prove this falsehood. Again–the idea is to create distrust and confusion.

To help explain 4th generation warfare and the tactics being used today, I invited James Scaminaci III to help us better understand. He is more qualified than anyone I know to explain 4th Gen Warfare.

James has a Ph.D. from Stanford University in political sociology. His dissertation committee was headed by Seymour Martin Lipset and included Gabriel Almond and Condoleezza Rice. He is a retired US Navy Reserve intelligence officer. He was also a senior civilian military intelligence analyst responsible for the Balkans and the former Soviet Union. He was stationed for nearly four years in post-war Bosnia-Herzegovina. Following the Balkan conflicts of the 1990s, from outside and inside the former Yugoslavia, James learned a great deal of how political and religious ideologies interact and combine into ethno-nationalist projects that delegitimize a left-wing governing philosophy and end in genocide.

James has written a few articles about 4th generation warfare and how it applies to Trump. These are suggested reading:

His academic writings on 4th Generation Warfare can be found here. My discussion with James is close to an hour long but I want to touch on a few important highlights.

4GW is a very sophisticated psychological warfare strategy designed to, quite simply, destroy freedom in the United States and install authoritarianism.

What is happening in the Trump age is unprecedented with access to major media and social media and everyone in the United States (and the world) is experiencing the effects of this 4th generation warfare. Trump continues to promote the idea that the previous ruling establishment had failed the people and is corrupt and has no moral right to govern. He attacks his opponents, creates chaos, and instills fear and apathy in his base.

Remember, the better narrative wins with 4GW, so we have to counter it. But how do we combat 4GW? For starters, we must understand what it is and how it operates. Learn to recognize when it is being used.

People need to educate themselves about this type of psychological warfare. Read the links I shared above, read my book The Cult of Trump, and watch this informative interview with James that is linked below. 4GW is a real strategy that is being used and we must be able to recognize it, so as to counter and combat it.

Secondly, make sure to reality test and verify your sources of information. Don’t just retweet or share things without reading them first. Research the writer, the news agency, the source and fact check!

The late Colonel John Boyd’s work explained that the core of what would become Fourth Generation Warfare is to create, magnify, and exploit the sense of menace, uncertainty, and mistrust. The objective is to destroy the mental and emotional bonds that keep a society together. The objective is to increase the sense of fear, anxiety, and alienation.

The counter to 4GW, in Boyd’s view, is to take the initiative, be adaptable to new circumstances and situations, and work in harmony. But the real key is to find inside yourself moral strength and moral courage. To believe in moral values and moral authority. Boyd did not suggest the source of these strengths. Each person has their own. But, in preventing a society from being torn apart, we must remember and promote the view of who we are as Americans and what America is. It is that vision that we hold dearest and closest to us that Trump, the GOP, the Christian Right, and its paramilitary allies want to destroy.

Pro-democracy, pro-secular forces find themselves locked in an existential struggle with fascistic and extreme Christian forces at the physical, mental, and moral planes of conflict. Winning starts by recognizing the nature of the political war that you are engaged in and the strategy being employed against you.

But more than just debunking claims is needed. We need to employ the opposite of 4th generation warfare which entails trusting experts with proven integrity and track records. We need moral leaders, scientists, business people, and institutions. We have to evolve all of our institutions to cope with the changing world environment. Yes, there may be problems with our current system and institutions. But the way to answer isn’t by complaining about them. Instead, get involved and help to change them. Get out and vote. Get involved in local politics. Resist authoritarian demagogues like Trump. Reach out with love and respect to family and friends who are being sucked into the QAnon cult and other cults which are preying on people’s uncertainty with COVID as well as the economy in a shambles.

We need to keep trying to influence people for the good and explain 4GW tactics. We are in a conflict where one side wants to emphasize menace, anxiety and uncertainty but to combat it, we have to have moral strength and moral courage. We can win and overcome anything they throw at us.