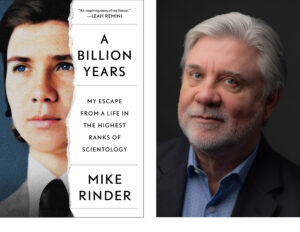 When I exited the Moonies in 1976, Scientology was one of the first “other” cults I learned about. One of the first counter-cult activists I befriended was Paulette Cooper, a journalist who wrote The Scandal of Scientology; A Chilling Examination of the Nature, Beliefs, and Practices of the “New Religion” in 1971. It seemed she was the only one talking about Scientology in the media, and I was the only one talking about the Moonies. I quickly became a victim of what Scientology calls “fair game.”

Mike Rinder’s parents started taking him to their local Scientology center when he was five. By age fifteen, his family had traveled from Australia to England twice to visit L. Ron Hubbard’s home and participate in advanced Scientology courses and auditing. In 1981 Mike started working in the Office of Special Affairs- a department of Scientology devoted to dealing with external matters, including media and public relations, legal and government relations, and dealing with those who were labeled “enemies” of Scientology. There he became the third person in power.

Mike left Scientology in 2007 when he realized that he couldn’t change the pattern of violence and abuse that had become endemic under the “leadership” of David Miscavige. Mike started speaking out against Scientology in 2009 in the St. Petersburg Times. Since then, Mike has done numerous media interviews, was included in HBO’s Going Clear, and co-hosted three seasons of A & E’s Leah Remini: Scientology and the Aftermath. Here is a short clip of part of my appearance at the end of season one of that show. Currently, Mike is co-hosting the podcast Fair Game with Leah Remini.

Since leaving Scientology, Mike has become one of the biggest and loudest critics of Scientology. His defection from Scientology started after Hubbard’s death when David Miscavige took control of the cult. Mike couldn’t ignore the ruthless leadership under Miscavige and finally realized there was no way to fix Scientology from within. In his new book, Mike pulls back the curtain on many aspects of this notorious authoritarian cult, including criminal activity the church of Scientology has been involved with for decades.

The name of Mike’s podcast, Fair Game, is a term used in Scientology to describe how they treated their enemies. When Mike ran OSA, he operated under the mindset that their enemies were fair game; the ends justify the means. Protecting Hubbard and Scientology was the rule. Hubbard canceled the use of the term Fair Game as it created terrible public relations. Fair Game is still operating in attacking its former members and critics.

I know this firsthand. I have been threatened. I have been followed. I have been sued. Scientology filed two failed complaints against me regarding my counseling license. They have ordered members to steal and examine my trash. They told my neighbors that I was a criminal. They picketed my office in Nazi uniforms inviting people to “Join Steve Hassan’s crusade against religions.” They have gone after my whistleblower friends, like Jon Atack.

My friend Paulette Cooper has also been harassed, falsely accused of a terrorist bomb plot, and spied on by a Scientologist “best friend.” A grand jury indicted her. Then the largest FBI raid revealed internal documents, vindicating Paulette completely and sending eleven senior Scientology officials, including Hubbard’s wife, to prison.

For more than 25 years, the IRS denied tax-exempt status to the church of Scientology. In 1967, the IRS determined that Scientology was a commercial entity operated solely for Hubbard’s benefit. In 1993, seven years after Hubbard’s death, and with the help of Mike Rinder, the IRS suspiciously granted the church religious tax-exempt status and settled their massive tax bill for just $12.5 million.

For over 30 years, cult agents manipulated government officials, the public, and members into thinking Scientology was something it wasn’t. One of the architects of making Scientology tax-exempt was Larry Brennan (later Denise Brennan). Denise oversaw the Scientology organization’s corporate work, structure, and tax status. Denise also worked in the Guardian’s Office Worldwide (the precursor to OSA), running legal issues outside the courts.

I have been saying for years it is time to end the Church of Scientology’s tax-exempt status. The entire principle of religious organizations having tax-exempt status is based on their providing public charity services. They do not do this. Many of the group’s practices violate articles of the Universal Declaration of Human Rights by participating in the use of slave labor, inhumane punishments, and interfering with members’ families and privacy while limiting freedom of thought and expression.

Scientology has been getting away with untold millions of dollars in tax liabilities for years. Emerging stories of violence, abuse, and control occurring at Scientology facilities alone should be enough to strip them of their tax-exempt status. Scientology misuses its subsidized income to hire private detectives to follow and harass people; they place ads on google to bury information. They own countless URLs to ensure they control their enemies’ narratives online. Not only does this strain the economy, but it also helps finance an organization that systematically uses undue influence to imprison the minds of followers and destroy lives.

Though many have insisted on the action, the IRS and other government organizations seem to do little to address the issues with Scientology. Because America is a country that prizes freedom of belief, those in power are afraid to criticize any group claiming to be a religion. However, focusing on unethical and illegal behaviors makes it possible to differentiate between ethical and religious groups and those who use undue influence and control over followers.

In late April of 2022, three people who grew up in Scientology filed a lawsuit alleging that they were trafficked as children and forced to do hard labor for little or no pay. The lawsuit claims that the trio was forced to work as young as six years old in Scientology’s Sea Org and Cadet Org. The filings detail accounts of horrific mistreatment under the control of Scientology, including separation from their families as minors; confiscation of their identification documents; dangerous manual labor conditions; exploitation, indoctrination, and manipulation; and physical, sexual, and emotional abuse.

When Jon Atack wrote his book A Piece of Blue Sky: Scientology, Dianetics and L. Ron Hubbard Exposed in 1990, Scientology did everything within its power to stop the publication, making it only the second book to be banned in the U.S. The manuscript was published without alteration because it was factually accurate. Scientology is the quintessential destructive mind-control cult. It’s an authoritarian, pyramid-structured group that uses deception and mind control to make its followers dependent and obedient.

The Cult Awareness Network (CAN) was an anti-cult activist group with grassroots groups throughout the U.S. It provided information on cults as well as support for concerned families and former members. It was founded in the nineteen seventies and was sued by Scientology into bankruptcy in 1996. These Scientologists continued for years to use the CAN telephone hotline without disclosing the change in leadership. Remember, information wasn’t readily available until the internet became widely used.

This was a massive setback for the effort to educate the public about destructive mind control. It destroyed years of work we had done. Efforts were made by former cult members to develop smaller groups to spread awareness. Once we see someone’s lightbulb lighting up and they start to see the light, they need help. Mike, along with some other former members, founded the Aftermath Foundation, whose mission is to help people escape Scientology. For the time being, serving former Scientology members keeps the foundation’s hands full. Hopefully, one day, they will be able to expand and help people leave other cults.

Although the battle with Scientology feels overwhelming, people like Mike Rinder leaving Scientology after 52 years are what gives me hope. Scientology, over the years, has lost many high-profile members. Rinder estimates the cult has only some twenty-five thousand members worldwide. Yet the cult has assets in excess of three billion dollars. Every day, more secrets of the group are being shared, and its practices are being scrutinized. Always remember, there is always a way to help a loved one leave a cult. There are so many people coming out of destructive cult groups as well as coercive personal relationships that if we can network, we can strategically reach out and preemptively educate people the world over.

A Billion Years: My Escape From a Life in the Highest Ranks of Scientology

Something Can Be Done About It: Rinder’s blog

Operation Clambake: Undressing the Church of Scientology since 1996

A short video I made with Paulette Cooper

The Miscavige Legal Statements: A Study in Perjury, Lies and Misdirection by Larry Brennan

My interview with Denise Brennan, who, as Larry Brennan, was ordered by Hubbard to make Scientology tax-exempt.

My blog in the Huffington Post called for an end to Scientology’s tax-exempt status.

Steven HassanA Billion Years: My Escape From a Life in the Highest Ranks of Scientology with Mike Rinder10.13.2022