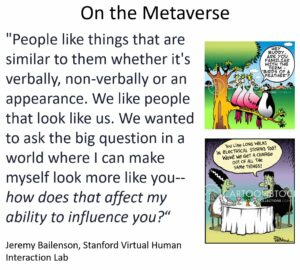 The Digital Universe: A Blessing and a Curse

The Internet and social media have the potential to serve as a uniting force and are tools that can be used in positive ways. During the ongoing COVID-19 crisis the Internet has been a vital way to continue working and learning and maintaining at least a minimum of social contact, which is vital to the emotional health of human beings. The virus was first discovered in China and the genetic code of the virus was uploaded for scientists around the world to get to work to develop ways to cope with this disease.

However, social media does not promote relational maturity and has made it easy to hack millions of people’s minds and convince them of seriously implausible conspiracy theories (flat earth comes to mind). Even more dangerous is the spread of cult ideologies, such as QAnon, “I AM”, the Illuminati, and the false beliefs that chips are being implanted in Covid vaccinations designed to stop a disease that has killed countless people. Authoritarian cults are a worldwide epidemic now. The rule of law and democratic principles–like one person, one vote–is being attacked State by State.

The idea that the future of humanity is destined to be in a digital, virtual reality world is being vigorously promoted by people such as the founder of Facebook, Mark Zuckerberg. Facing worldwide scrutiny and the possibility of government intervention and regulations, he has now done a rebranding effort to “Meta.” His vision is that everyone will wish to be virtual and live in a “Metaverse.” Virtual reality technology is getting more and more advanced. Again, while technology can be used ethically and primarily to help human beings and the world function better, it also can be a nightmare we currently cannot comprehend. While Zuckerberg might dream of unlimited power and money and fantasize how it will be to control an entire “universe” there is little evidence that such a reality could satisfy the human developmental and emotional need for in-person, meaningful connection. 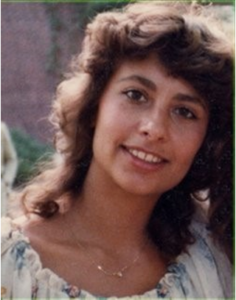 As you may have noticed by her last name, Aureet and I were indeed married when she did her dissertation and published her theory. She tragically died in 1991, at age 33, when attempting to get our golden retriever out of an icy pond, tragically drowning in the freezing water. Her death became a rallying cry to train police and rescue workers in cold water rescues and countless lives have been saved since then. To learn more about Aureet and the tragedy please see the memorial website her family and friends created. There you can see her artwork, poetry, and learn more about this exceptional person.

I believe at this critical time in human history, as we deal with global climate crises and a raging pandemic, people need to better understand how to grow up and have real (not virtual) interactions with other people. I believe educators and mental health professionals would be well served to review and perhaps do more research on what I believe to be a significant theory. In this post, I am highlighting the development model created by Aureet Bar-Yam Hassan and her mother, Dr. Miriam Bar-Yam, described in https://Interpersonal Development across the Life Span: Communion and Its Interaction with Agency in Psychosocial Development.

Traditionally accepted theories of human development, such as those of Erik Erickson’s stage theory for identity development, are very limited. When doing her doctoral work in psychology, Bar-Yam Hassan offered a substantial improvement in her relational model for human development. She took the position that because Erickson was a man, his model naturally had a built-in male instrumental bias. Is growing up to adulthood only about separation and individuation? In fact, most of Erickson’s research was done only with males and lacked a sufficient understanding of the human need for relationship and connectedness as well as separation and individuation.

(1) the corresponding developmental task of communion and its interaction with agency development;

(2) the interpersonal need which motivates the individual at that time, and

(3) the nature of relationships that occur at that stage. 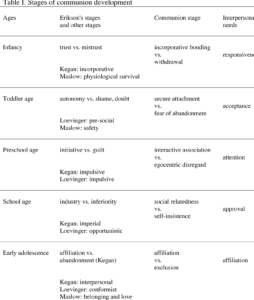 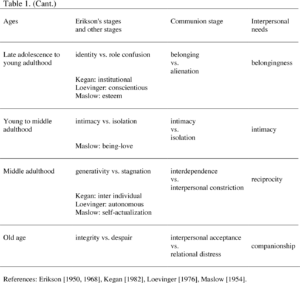 Bar-Yam Hassan emphasizes that each stage has its own form of estrangement if interpersonal needs are unmet in that stage, and “…failure to develop a deeper sense of ‘interdependent’ human connectedness severely hampers both communion and agency in adulthood.” In a detailed summary paragraph, she describes the domino effect of unmet emotional needs.

Without adequate responsiveness the infant withdraws. Lack of acceptance in the toddler years leads to fear of abandonment. During the preschool years, inadequate or inappropriate attention results in egocentric disregard. Lacking adequate experiences of approval, the school child remains self-insistent and self-centered. Without adequate affiliation, the young adolescent suffers from the devastating effects of exclusion. Failing to experience belongingness, the older adolescent suffers from a sense of alienation. Without experiences of intimacy, the young adult is left with a sense of isolation and loneliness. Lacking experiences of reciprocity, the middle-aged adult becomes interpersonally impoverished and constricted. Without companionship, the older adult experiences relational distress and despair in facing mortality.

It is clear that healthy development and the ability to function well at all stages of life depends on healthy human relationships that allow a person to mature and develop emotionally, rather than remain in a predominately egocentric, child-like state.

There is increasing evidence that the use of the Internet and social media easily becomes an addictive behavior and can lead to depression and a devastating sense of isolation. The number of “friends” and “followers” a person has on social media leads to a false way of measuring friendship and personal value by quantity, rather than the quality of such relationships.

Meaningful conversation and the ability to express oneself has been replaced by Internet slang: “OMG, BRB.” Short, limited-character messages fly by at a speed that makes any significant communication almost impossible. And the sheer amount of information available can easily lead to mental and emotional overload if not carefully regulated.

Clearly, there is no going back to pre-Internet days, and the breadth of global connection is still of great value. But we have seen over the past several years, and are continuing to see, the extremely dangerous and negative effect when social media is used by bad actors such as malignant narcissists and cult recruiters. It is not too late to change direction and acknowledge the human need for empathetic, in-person, meaningful relationships.

As a society and global community, we need to ask ourselves what kind of world we want to live in and, more importantly, pass it on to our children. Do we want to blindly follow the trend toward a virtual, isolated, digital world, in which human relationships are consistently minimized and devalued?

Or do we want to promote a society that encourages positive in-person, human interactions? If this is what we want, we need a well-defined and inclusive understanding of healthy human development, such as that developed by Bar-Yam Hassan. Humans are born to be in relationships with other humans, not with digital technology. We need to assure a healthy future for all, and not just focus on a computer-generated or AI manipulated “reality. As we need real food, and not just artificial things, clean water, clean air, we need warmth, virtue, compassion, empathy, and healthy, meaningful relationships with people in the real, not made up world.

Interpersonal Development across the Life Span: Communion and Its Interaction with Agency in Psychosocial Development.

What does it mean to be “connected” in today’s digital world? | by Amie K | New Media | Medium