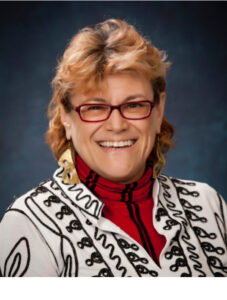 Dr. Germaine Odenheimer is a geriatric neurologist and professor emeritus at the University of Oklahoma College of Medicine. The College of Medicine recruited her to help develop a geriatric curriculum for medical students; she spent her entire clinical career recognizing and caring for people with cognitive impairments. I had the good fortune to be at the Program in Psychiatry and the Law meeting in September 2021 when Dr. Odenheimer talked about her fight against fraud and deception by people claiming to have a cure for Alzheimer’s.

Odenheimer is officially retired, but she maintains her medical license and works as a fierce advocate for people with cognitive impairments and their caregivers. Her work is vitally important, and I invited her to have a conversation with me about it so I could share her story.

I asked Germaine how she moved from teaching to advocacy work. Besides her professional background, she also served as a caregiver for her mother, who had dementia. This experience gave her a deep understanding of how difficult it is and how vulnerable caregivers and patients might be to false claims.

Is an “Expert” in Dementia Treatment Not Qualified to Attend a Meeting on Dementia?

In 2019 Odenheimer saw an announcement on Facebook for a free dinner talk focusing on new treatments for Alzheimer’s disease. She signed up for the event. The event organizer called to see if she was “qualified” to attend the talk. After learning of her background, they said Dr. Odenheimer could not attend as she wasn’t “qualified.” She was told that the event was only for people with dementia and someone who could help them make financial decisions. Alzheimer’s Association members were not qualified either. Indeed, something was very suspicious about this recruitment event.

A friend agreed to pose as someone with dementia, and Germaine would pose as her caregiver. Odenheimer had to wear a wig and keep a low profile because she is well known.

The man giving the talk was very slick. He knew how to “soften up” his audience by increasing their anguish over their condition and frustration over the lack of cure. He said Alzheimer’s was the biggest failure of our medical system and claimed that doctors don’t spend enough time with you. Odenheimer points out that all of this is true, but the speaker used it to increase his audience’s agitation. When people are stressed, they become more susceptible to undue influence and mind control techniques.

The talk also used standard marketing pressure techniques, such as offering initial visits at a significantly reduced amount ($95 rather than $295 if they signed up right away). He said that he sent the brain MRI studies to the Netherlands for a definitive diagnosis and that it was covered by insurance, (which is not true). He finished his presentation by claiming an 85% success rate, never explicitly stating it was for his treatment.  He then abruptly left the room before anyone could question him.

Odenheimer was surprised that his talk was so high-level and full of current and accurate information. She was very suspicious that a chiropractor would know such detailed information about Alzheimer’s. After the event, she searched through Facebook and found at least 200 other events using the same ad. She also discovered a Youtube video of Medical Grand Rounds at the Cleveland Clinic that was essentially the presentation she had attended. The presentation had been given by Dr. Dale Bredesen, who was the former head of the Alzheimer’s Center at UCLA.

Having good evidence of suspected fraud being committed through these dinner events, Germaine contacted the Oklahoma attorney general. She was told to report this to the Chiropractor Board. She did and it does appear that the chiropractor, who is still in practice has stopped advertising his cures for AD. She then filed reports with the FTC, Alzheimer’s Association, AARP, and the FBI. Nothing appears to be happening, but the wheels of justice are admittedly slow.

“Where Did I Put My Car Keys?”

Many worry about memory problems if they forget someone’s name or are unsure where they put the car keys. Odenheimer reassures us that everyone forgets things. Retrieving information can be more difficult as we age. While this can be frustrating and embarrassing, it is not automatically evidence of cognitive impairment. Dementia tends to cause more serious memory impairments such as not remembering how to put the key into the ignition and start the car or not recognizing your children or spouse. Sometimes cognitive impairment can be caused by anxiety, depression, hearing loss, or side effects from medication. Regardless of the cause, when cognitive impairment interferes with your ability to do things that used to be easy, it should be evaluated.

Is There a Difference Between Dementia and Alzheimer’s?

Dementia is an umbrella term for cognitive decline with specific characteristics. Alzheimer’s is the most common cause of dementia and is associated with a particular pathology involving the accumulation of amyloid (plaques) and neurofibrillary tangles in the brain. But a person can appear to have Alzheimer’s based on these abnormal accumulations in the brain without symptoms of dementia.

For the past 40 years, Alzheimer’s research has focused on getting rid of amyloid. So far, although, amyloid can be decreased in the brain, no treatments have been clinically effective. At least half a dozen different human genes are associated with Alzheimer’s, making it likely that it is more than one disease. There is growing interest in focusing on the neurofibrillary tangles and Tau proteins as a possible cause.

Research has shown that having a stroke may create increase the risk to develop not only vascular dementia but also AD.  It turns out that causes of stroke and heart attack share many risk factors with AD including high blood pressure, diabetes, smoking, excess alcohol, obesity, and high cholesterol. So, while there is no guaranteed prevention or cure for dementia, the guidelines for heart health are considered the best protection for the brain.

Odenheimer has made it her mission to warn caregivers and others involved in treating people with dementia about this scheme. She talks with as many different organizations as possible and has recently presented at the Oklahoma State Conference on Aging about the scam.

While there is a great need for ongoing research into the causes and treatments of dementia including Alzheimer’s, support for caregivers, is the most critical and immediate need. According to the Centers for Disease Control, over 6 million people in the United States have Alzheimer’s and related dementias. By 2060, the number of Alzheimer’s disease cases is predicted to rise to an estimated 14 million people, with minority populations affected the most.

Any claims of cure should be supported by solid peer review in respected journals. Being published in a journal is clearly not enough. There are “vanity journals” that accept payment for publishing research and claiming they are peer-reviewed.

The time limitations imposed on clinicians, by insurance companies (including Medicare), to evaluate and treat dementia patients, need to be seriously revised. Since two people are involved (patient and caregiver), allowing 15 minutes per visit is unrealistic. Including the caregiver as an integral part of the treatment plan is critical, as they need intense support. One-third of dementia caregivers die before the patient with dementia, likely due to inadequate support.

Unfortunately, there are always those willing to prey on vulnerable people. We owe Dr. Odenheimer a debt of gratitude for working to warn and protect those with cognitive impairments and their dedicated caregivers.