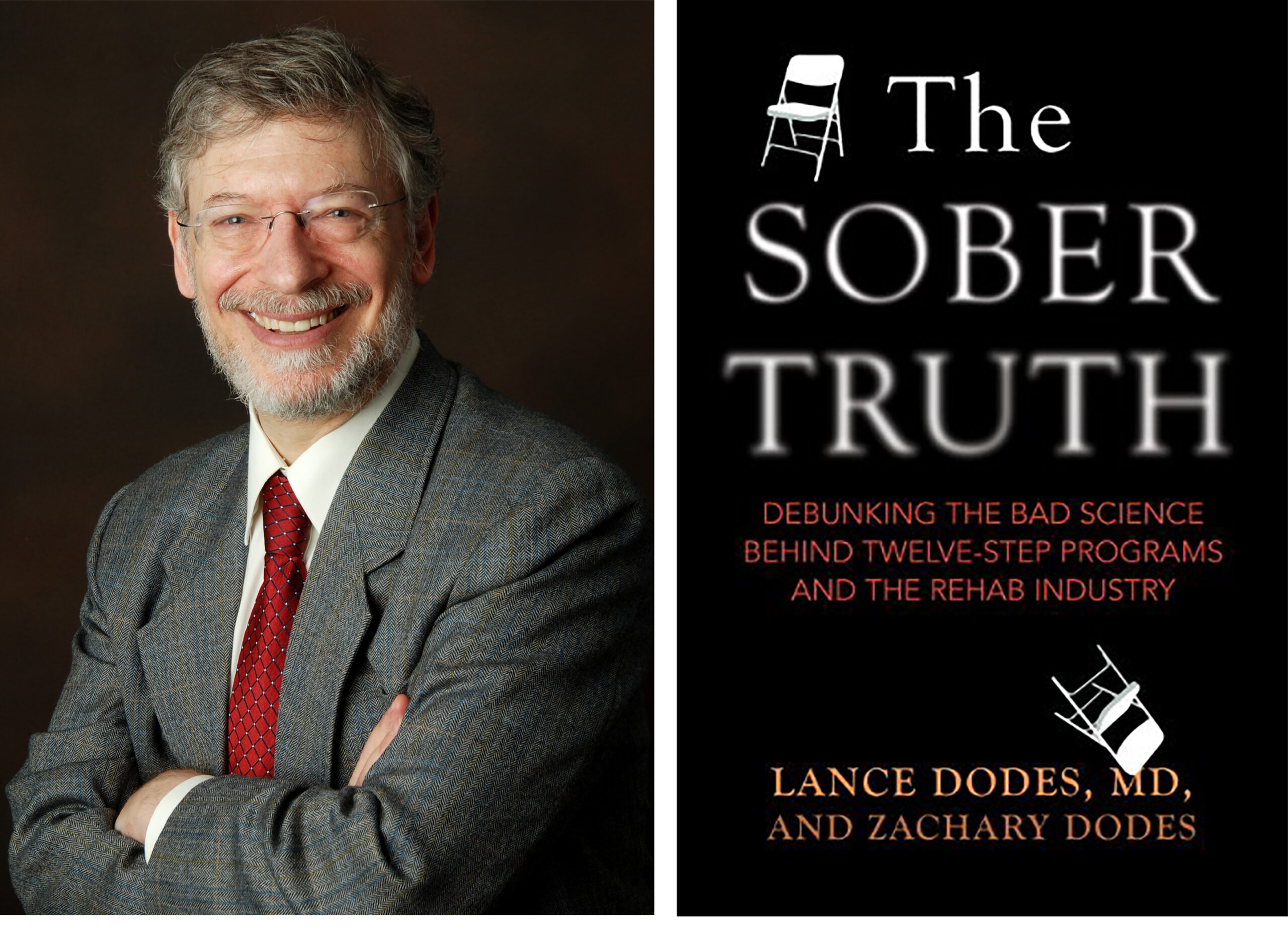 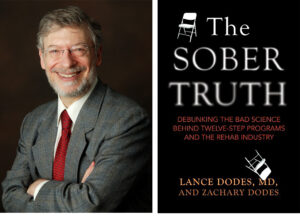 Drug addiction is a serious individual and public health problem worldwide. In the United States, alcohol is the most widely abused substance. Alcohol addiction harms a person’s physical, psychological, and social well-being. An estimated 20 million Americans have addiction issues (this number does NOT include internet and pornography addiction). In the United States, an estimated 95,000 people die from alcohol-related causes annually. The CDC estimated that over 100,000 people died of drug overdoses this past year. Is addiction a disease? Dr. Lance Dodes joined me to discuss what his research and clinical experience have taught him over the decades.

Dr. Dodes is the former Director of the Substance Abuse Treatment Unit of Harvard’s McLean Hospital, Director of the Alcoholism Treatment Unit at Spaulding Rehabilitation Hospital (now part of Massachusetts General Hospital), and Director of the Boston Center for Problem Gambling. He is the author of The Heart of Addiction, Breaking addiction, and The Sober Truth: Debunking the Bad Science Behind 12-Step Programs and the Rehab Industry. He is the author of many journal articles and book chapters about addiction.

This question may seem simple, but it is not. Dr. Dodes explains that the word “addiction” is used in two entirely separate and distinct ways:  physical and psychological.

When taking certain drugs consistently, the body develops a tolerance to the drug. At that time, the drug loses its ability to provide the desired effect, leading to the need for higher and higher doses. Correspondingly, when the drug is stopped, there is a withdrawal reaction which may be dangerous. The combination of tolerance and withdrawal is a physical addiction. Aside from the risk of withdrawal symptoms, physical addiction is usually relatively easy to treat in short-term detoxification. Once the detox is complete, there is no more physical addiction. Yet, we all know that merely detoxifying somebody does nothing to the addiction, which almost always continues. The essence of addiction, and why it is so hard to treat, is that it is a psychological symptom, not a physical one.

Clarifying the Distinction Between Physical and Psychological Addiction

A study of returning Vietnam vets shed some light on this question. The use of heroin by soldiers in Vietnam was an epidemic. Any discharged soldier that tested positive for heroin use went to a detox program. At the same time, heroin users in the United States who had not been to Vietnam also were treated in detox programs.

Follow-up studies showed that the vets had an enormously lower recidivism rate than those who had never been in combat in Vietnam. How could this be? Same drug, same addiction. The answer lies in the difference between physical addiction and psychological addiction. The Vietnam vets had used heroin (and therefore became physically addicted) because of the stress of being in a war zone. When they were no longer in that situation, over 90% did not need to use the drug after successful physical detox.

On the other hand, the people who were compulsively (addictively) using drugs stateside were doing so to manage emotional issues, not an external situation. And it is these psychological factors that are the cause of addictive behavior. The soldiers did not have these internal issues and the need to manage them with compulsive drug use, so they could easily stop the drugs once safe at home. Consequently, for treatment to be successful, addressing and resolving the psychological issues underlying drug use is crucial. Otherwise, relapse is predictable.

The Sober Truth About 12-step Programs

Alcoholics Anonymous (A.A.) and similar 12-step programs have been seen to be the “gold standard” for the treatment of alcohol addiction for many years. However, since the publication of my book, Combating Cult Mind Control, I have been approached many times over the years by people telling me that A.A. is a destructive cult. Initially, I was skeptical since I understood that A.A. had helped thousands of people. Dr. Dodes’s book, The Sober Truth: Debunking the Bad Science Behind 12-Step Programs and the Rehab Industry, is very scholarly and well-researched. One of the reasons I wanted to talk with him was to understand more from him, especially interested in what he has found to be most helpful for people to reclaim power over their mind and body to live a healthy, fulfilling life.

A.A. was founded by two men associated with the British religious-based Oxford Group. The underlying beliefs are Jesus and the Bible. Therefore, they believed that the closer you are to God, the freer of illness you will be. The cure is to get closer to God by admitting your powerlessness and turning all control over to God. Initially, the medical establishment did not accept A.A. as an effective treatment. So, in the 1940s, an extensive public relations campaign was started, and A.A. began to publish data to promote the program.

Dodes found that most of the research done to support A.A.’s claims has lacked the type of controls and procedures necessary to produce reliable, objective data. Most of the studies followed addicts for only perhaps six months or a year. But most egregiously, when people dropped out of the program, they were deleted from the study, therefore having no adverse effect on the claims of success. The people left were the ones who did succeed through the program. This created an entirely false statistical result because it could only show the minority who were doing well. When the dropouts were factored back in, the success rate of 12-step programs was found to be between 5% and 8%. People often say, “AA doesn’t work for everyone,” but they don’t realize that, far from everyone, it works for only a statistically tiny group. In addition, there has been significant harm done by people feeling bad about themselves because they’re told it’s their fault for failing (they didn’t “work the program” hard enough).

Eventually, A.A. broke with the more religiously oriented Oxford Group. However, a lot of religious fervor still exists within A.A., and members often proselytize on behalf of the program.

Some addicts have benefited from A.A. or other 12-step programs. Even 5-8% is not insignificant. As I have said repeatedly to defenders of 12 Step programs, “if it has helped you to live a fulfilling life, keep using it!” But for those who feel like they are a failure because they can’t maintain the ideology and practices, please know there are alternative approaches. Please know that the inflated claim of success and faulty research is not based on science but rather on faith in the “program.” A.A. has no national organization that can enforce appropriate standards in local chapters. Leaders of individual groups may not have the training to run therapeutic groups, and some may engage in sadistic, confronting behaviors.

Much of such programs’ success is due to the social aspect of the group. Often, when the program doesn’t work, people are told to work harder and become more committed to the group. Making failure a personal fault rather than prompting an honest look at the program is a tactic used in many authoritarian cults.

What is the Cause of Psychological Addiction?

Dodes’ theory is that the actual trigger to addictive behavior is a narcissistic injury–an emotional experience of helplessness that is overwhelming and causes a rage response. In this emotional state, nothing matters except relieving the sense of helplessness. The particular form of the addiction (alcohol, heroin and opioids, gambling, internet, pornography, even obsessive cleaning) is not highly significant. Letting go of the addictive behavior requires a therapeutic exploration of the origins of the helpless feeling and working backward to identify places where different responses might have avoided the addictive response. Dodes stresses the importance of figuring out these sources of feeling helpless. His scientific articles and first two books focus on understanding how addiction works in different individuals and how people can manage it. Harm reduction approaches, such as Stanton Peele’s Life Process program and Smart Recovery, are two programs that show promise as an effective way to help with addiction.

Dodes is critical of treatment centers’ profit motive, which charges tens of thousands of dollars per month. Being in a controlled environment does not prepare you for everything one needs to live empowered in the real world. I worked with a client this past year who had repeatedly been to these treatment centers for over ten years and spent countless dollars–never to have the change he sought to get.

When seeking treatment for oneself or a loved one, it is crucial to check several areas of the treatment program:

Unfortunately, there is no magic bullet, and battling addiction remains a complex and challenging task. Whatever the treatment modality, government regulatory agencies need to ensure protection from harm–from organizations and individuals who take advantage of the needs of vulnerable people, promising them freedom from addiction but never delivering it.

Addiction as an Attachment Disorder by Philip Flores

Steven HassanAn Expert on Addiction and Critic of 12-Step Programs: A Conversation with Lance Dodes M.D. 08.04.2022