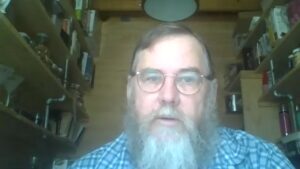 Ever hear of the Messianic Communities? or the Twelve Tribes? or the Yellow Deli? Well, this is a group I have known about and worked on for over thirty years. In fact, I wrote in Combating Cult Mind Control about an intervention I did with a young woman taken in. Reverend Robert Pardon and his wife Judy assisted. I reached out to Roger Griffin and he was able to do an interview with me about this group. Of particular importance is he filled out the BITE Model of Authoritarian Control for the group below. This was a communal cult that demanded total surrender- give over your money, possessions, and especially your mind to the “prophet” Eugene Spriggs. Spriggs reportedly died from Covid in 2020. This group shuns modern medicine so naturally, they are anti-vaccination (not just covid life-saving vaccines). The group gives members a new name, men wear beards and long hair, women- long hair and skirts to the floor. Children are corporally punished and are not allowed to use their imaginations- something all child psychologists say is vital for healthy development.

The Colorado wildfire which spread due to 100+ mile per hour winds may have originated on their compound, although there is not yet official word on this. I thought it wise to share some information for people to learn about this international cult. If it turns out the first originated on their compound, Griffin wonders if they had a candle-making operation or blacksmithing operation going on. Griffin says since the group thought they were “God’s chosen people” they did not pay much attention to the laws of the country or state. This is common in destructive cults. Roger’s wife Joellen nearly died from being instructed to not take her medication for her serious thyroid condition. The cult leader said if she and Roger really had faith, they would be healed. This led to their defection eventually along with their six children. After exiting, Roger went to nursing school and was a psychiatric nurse. He recently retired and wishes to help all those still trapped in this cult as well as others.

I encourage people to watch the video interview below.

Below are the main points of the BITE model. Using ex-Mormon John Dehlin’s idea, former Elder Roger Griffin colored the bullet points in the following ways:

The Twelve Tribes — Freedom of Mind