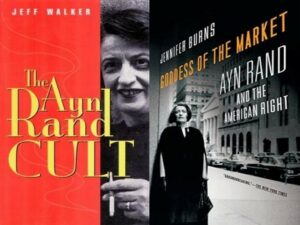 You may be familiar with Ayn Rand because of her popular novels, “The Fountainhead,” and “Atlas Shrugged.” But, you may not be aware that Rand was an authoritarian cult leader, and her ideology promoting selfishness continues to influence the GOP. Rand taught that selfishness was good and that altruism was evil. (She even wrote a book called “The Virtue of Selfishness”). She taught that the poor were exploiting the rich, and opposed any form of welfare or economic regulation. She even railed against public schools. She argued that all forms of government benefits constitute an immoral redistribution of wealth, even though she hypocritically received Social Security payouts later in life. George Monbiot wrote an article for The Guardian many years ago but it is still true to this day: How Ayn Rand became the new right’s version of Marx. Her psychopathic ideas made billionaires feel like victims and turned millions of followers into their doormats.

On the Randian Atlas Society website, they count many famous Hollywood stars, wealthy and successful people extolling Ran’s books and ideology. Ronald Reagan, SCOTUS Clarence Thomas, are just prominent people who have talked about their belief in this ideology. I was frankly surprised at how many famous actors, and directors, like Steven Spielberg, are being used to recruit more people into this ideology of selfishness.

I attempted several times to interview the authors of these two fine books but was unsuccessful in connecting with them. However, I believe what we need more of in the world today is the polar opposite of Randian cult ideology. We need to focus on caring about others — something a malignant narcissist is unable to do: have empathy. People around the world need to feel community, trust in themselves, and leaders who are trustworthy and we need to adopt a solution-minded complex systems approach.

Rand was born in St. Petersburg, Russia in 1905. When she was 12, the Bolshevik Revolution disrupted her family’s life. Rand lived in Russia under communist rule, and for some time her family experienced desperate poverty.

It is important to note that when people come from an authoritarian upbringing, they often gravitate to or start another authoritarian group. Countless cult leaders — including my former cult leader Sun Myung Moon — were originally members of other authoritarian cults. This is certainly the case with Ayn Rand: she hated communism but ironically imposed aspects of Stalinism on her followers.

Rand moved to the United States in 1925 on a visa for screenwriting, and she quickly became an activist for right-wing causes in the United States. In 1940, she worked as a full-time volunteer on Republican Wendell Wilkie’s presidential campaign against Franklin Roosevelt.

Rand’s first major success as a writer was “The Fountainhead” in 1943. And shortly after she released “Atlas Shrugged” in 1957, hundreds of Ayn Rand groups were founded at colleges across the country.

In New York, Nathaniel Branden founded “The Collective,” the largest and most prominent Ayn Rand group. Branden was an early admirer of Rand. He eventually became Rand’s associate, “intellectual heir,” and her lover. Rand and Branden later had a falling-out and Rand publicly denounced him, accusing him of a variety of offenses and claiming that he had unresolved psychological problems.

The “Collective” started out as an informal gathering of friends at Rand’s apartment but expanded as her profile grew. Branden was instrumental in driving this expansion. He sold Rand’s ideas to the masses, held courses in New York, and sent tape-recorded lectures to Ayn Rand groups in other cities. These early groups had many troubling, cult-like attributes.

Like all authoritarian cult leaders, Ayn Rand used undue influence to indoctrinate and control people. I developed the BITE model and Influence Continuum to help identify and describe the ways that cults recruit and maintain power over people. The BITE model can be used to help us understand the destructive ways that Rand regulated the behaviors, information, thoughts, and emotions of her followers.

The following are drawn from Jeff Walker’s “The Ayn Rand Cult” as well as economist Murray Rothbard’s “The Sociology of the Ayn Rand Cult.” Here are a few of the troubling cult-like qualities I see from these groups pulled from their works:

Many Randian groups still exist today. Although their cult-like structure may make these groups appear fringe, it is vital to note that Rand’s ideas are widely accepted and are mainstream among Republicans.

There are many other troubling beliefs in Rand’s work. She was a Social-Darwinist, she said homosexuality was “immoral and disgusting,” and she was a self-professed “male chauvinist” who said she would never vote for a female president. She seduced and maintained a sexual relationship with his number one disciple. When he rebelled, she ostracized him from the cult.

Rand’s ideas are everywhere in the contemporary Republican platform — as outlandish as many of them are. She has inspired generations of prominent Republican politicians and personalities — including Ted Cruz, Rand Paul, and Paul Ryan — who all cite Rand’s work as influential.

Like Rand, many Republicans and Libertarians demonize the poor, actively try to roll back rights for women and LGBTQ+ people and advocate dismantling the social safety net. The opposition we have seen throughout the pandemic to masking and social distancing is very Randian in nature. However, the selfishness that Rand preached is the opposite of what we need in today’s political climate. The only way to solve major political problems is to work together and offer help to people who need it.

Goddess of the Market: Ayn Rand and the American Right by Jennifer Burns

The Sociology of the Ayn Rand Cult by Murray Newton Rothbard

The new age of Ayn Rand: how she won over Trump and Silicon Valley Her novel The Fountainhead is one of the few works of fiction that Donald Trump likes and she has long been the darling of the US right. But only now do her devotees hold sway around the world by John Freedland