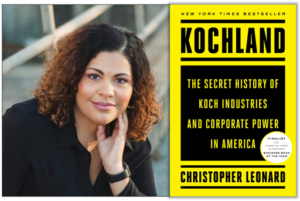 Charles Koch is the billionaire CEO of Koch Industries. Koch Industries is the second-largest private corporation in the United States. They have financial interests in many different industries including fossil fuels, forestry, cattle, derivatives trading, and hedge funds. These interests motivate them to support actions to deregulate the government and the economy, against the public interest. For example, the Koch network advocates policies that defend white supremacy, deny access to healthcare, implement voter suppression, and remove regulations that protect workers and the environment.

Koch and other members of the Koch network believe that if they can proliferate enough of their unpopular ideas, then they can shift culture to influence policy.

For the past four years, Jasmine Banks has worked as the Executive Director of the non-profit project, UnKoch My Campus. The goal of the group is to intervene in the political strategy of Koch and his dark money network. As Executive Director, Banks has worked to expose the political damage caused by Koch and the nefarious nationwide network of think tanks, action groups, and academics that he funds.

Charles Koch has admitted publicly that he is aware that his policy agenda is not popular. He believes that the most important thing that he and anybody who shares his worldview can do is to use higher education as a tool to reproduce their ideas so that they become popular.

UnKoch My Campus discovered that the Koch network gave more than $450 million in donations to college and university programs across the country between 2005 and 2019. The money came from several Koch-run philanthropies including the Charles Koch Foundation, The Fred C. and Mary R. Koch Foundation, The Claude Lambe Charitable Foundation, and the Koch Cultural Trust.

By using Freedom of Information Act requests to acquire grant agreements, UnKoch My Campus has found proof that the Koch network’s donations to colleges and universities come with strings attached. These donations buy influence over hiring decisions, curriculum, and research on campuses. These agreements are posted for anybody to read on the UnKoch My Campus website.

The Koch network also funds hundreds of centers that are designed to reproduce climate denial, including the Regulatory Studies Center (RSC) at George Washington University, which pushes for climate deregulation.

The evidence shows that the ultimate goal of the Koch network’s donations is to give them the opportunity to use universities as a recruiting ground where they introduce young people to the “liberty movement” and integrate them into their “talent pipeline.” These are programs designed to build widespread support for the adoption of anti-democratic policies at the state and federal levels.

How the Koch Network Uses Information Control and Phobia Indoctrination

The Koch network employs phobia indoctrination, a common cult tactic to persuade people to support their political agenda and uphold the power structures that benefit them.

For example, in the past year, the Koch network pushed a propaganda campaign to create fear about Critical Race Theory being taught in public schools.

UnKoch My Campus reviewed articles, podcasts, reports, and videos published by conservative think tanks and political organizations with known ties to the Koch network from June 2020 to June 2021. They found that — as a result of a push from the Koch network — the pace at which the anti-Critical Race Theory propaganda was released surged around the same time that President Biden took office.

Releasing Critical Race Theory propaganda is a strategy to hinder social reform by making people phobic of racial progress. The Kochs indoctrinate an overwhelmingly white Republican base to become phobic that Black and brown people are attempting to exterminate their white identities. They push the narrative that their base is being oppressed by “political correctness.”

The use of phobia indoctrination is part of a larger political plan. The Koch network manufactured a controversy to energize their base. The base will then vote to keep Republican politicians in power who will support the deregulation of the environment and of the economy.

During her teen years, Banks was a member of an authoritarian Fundamentalist church. She sees similarities in the ways her former church and the Koch network function. They both use the same cult-like tactics to recruit individuals and indoctrinate them with far-right messaging. Banks’ background in the church has helped her understand and work against the ways in which the Koch network targets people.

Banks reminds us to have compassion when dealing with people who have been indoctrinated by the Koch network’s propaganda. These people are not evil or stupid, they just need help deprogramming the beliefs that have been instilled into them. To help these people deprogram, it is necessary to treat them with respect and model civil discourse.

The Kochs deceive people by withholding and distorting information to make themselves appear altruistic. For example, they appeal to people by claiming to be staunch advocates of all forms of free speech. Yet they disproportionately fund hate speech, bigoted speech, and speech that calls for the social and structural violence of historically targeted groups.

For this reason, we want to urge people to think critically and pay attention to actions — not words — when forming political opinions.

The Radical Capitalist Behind the Critical Race Theory Furor

Who and What are the “Koch Brothers”

Kochland: The Secret History of Koch Industries and Corporate Power in America