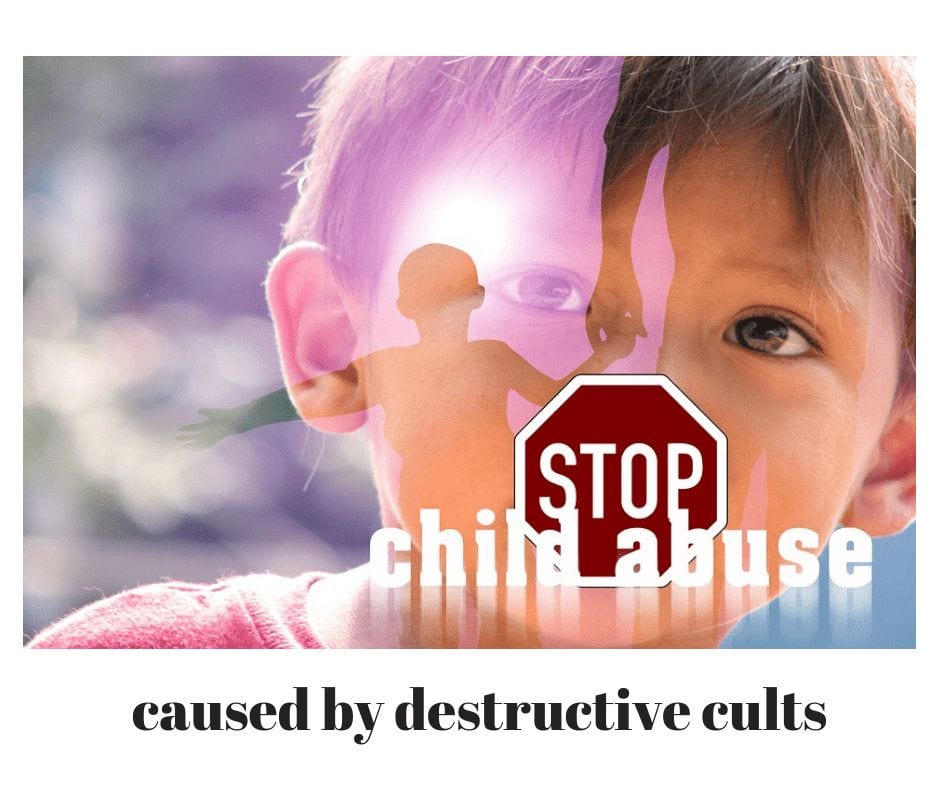 Freedom of religion does not give permission to traumatize and abuse kids!

Last week, I blogged about some ways that children are harmed physically by destructive cults, including murder, suicide, medical neglect, trafficking, corporal punishment and sexual predation. Many children that are born or raised in a group are helpless and do not have the resources to protect themselves. And very often, children are harmed psychologically and face difficulties not just during their childhood but also after leaving the group. For example, in this week’s blog we list just a few things that can cause lifelong harm if not addressed with proper counseling and resources.

Some groups, such as Jehovah’s Witnesses and Ultra-Orthodox Jews, discourage higher learning or a University education.  This lack of education leads to lost dreams and low income, setting them up for poverty. PEW research shows that only 4% of JWs have an income over $100,000 and 63% have a high school education or less. For some Ultra-Orthodox Jews, they are not even encouraged to learn anything other than religious texts.

Without a proper education, children can not be expected to develop their ability to think. Without education,  critical thinking and reality-testing strategies are not possible. They are trained to believe and follow whatever the leadership tells them to believe and do. Some are told to drop out of school or are home-schooled by a less-than-qualified person. Some groups teach that the internet itself is evil and forbid any access. Most destructive cults just tell followers that anything negative against them is bad and should be avoided.

Some groups have parents send their children away to cult-run boarding schools which put them at risk for more abuse physically, mentally, and sexually. Some ex-Scientologists describe the abuse they suffered abuse at Scientology-run schools.  Sadly, after leaving these cult-run schools, unable to cope as an adult, some, like students of the Family Foundation School, take their own life.

Many destructive cults are faced with young people who have a hunger to learn and a curiosity about how things work. When people learn they have been lied to by going to news sites or ex-members sites, they can become very upset and disillusioned and exit. A lack of education is a children’s rights violation!

For some groups, children are baptized at a young age, before the age of consent and without a mature understanding of the consequences if they decide to leave. One such group is that of Jehovah’s Witnesses.  On average, they get baptized between 10 and 18 years of age, with some as young as 6 dedicating their life to the organization.  They are under extreme social and familial pressure to conform to the group and outwardly display that dedication by public baptism. Another is Scientology. Ex-members have told their stories about their signing a billion-year contract to join the Sea Org before they were even eighteen years old.

The penalties are great if a child does make a formal commitment and then later decides it is not for them. They are ostracized and shunned by family and friends.  In a destructive cult, it is my position that members do not have informed consent. Therefore they cannot make independent decisions and fully understand the potential consequences. The law says they are underage to enter into a contract, purchase alcohol, smoke a cigarette or drive a car. Why then is it deemed legitimate to commit their lives to a particular group’s ideology and behavioral system?

Others are baptized prior to the realization that they are gay.  Having to hide your authentic self and hide your sexual orientation while being a member of a homophobic group, has driven some people to suicide.  For all, the fear of not living up to the difficult standards of the religion, causes great emotional turmoil, knowing they may be scolded or shunned.

There are many, painful experiences from former JWs that were baptized at a young age. One person wrote us:  “I was born and raised a JW baptized at 11 years old ended up being disfellowshipped at 29 and it has now been nearly 10 years since I’ve spoken to my parents and to tell you the truth it never heals. My parents are diehard JW’s, and lately, I’m starting to worry as my parents are getting older that I’ll never get the chance to see or speak to them again.” Messages like this are why I wrote the Freedom of Mind book about my approach to helping loved ones and why I do consultations with people from all over the world who wish ideas and strategies.

In some groups, such as Jehovah’s Witnesses, Mormons, Scientologists, Ultra-Orthodox Jews, and the FLDS, members are marrying as young as 16 or 17.  Since sexual contact is prohibited outside of marriage, they rush into this commitment to have sex. Dating is only for those with the intention of marrying. For others, they rush to get married so they can get out of the house and even, perhaps, the group.

Additionally, child marriage is a widespread issue, even in the United States. “For a long time, nobody knew the full extent of America’s child marriage problem. A group called Unchained At Last recently undertook a groundbreaking research project. They retrieved marriage license data from across the U.S. They discovered that 12 states do not even track data. But in the other 38 U.S. states, in just a decade, 2000 to 2010, more than 167,000 children as young as 12 were married. Almost all of them were girls married to adult men.”

These young girls are conditioned early on that their main role in life is to be a wife and mother caring for the needs of a man, the household, and children.  They are robbed of their rights to get an education, have a career and are stunted emotionally.

Worse yet, some groups encourage this practice even abducting and forcing young girls to marry older men.  In Utah, the Knights of Crystal Blade – a radical, fundamentalist Mormon offshoot – is under investigation for the abduction and assault of underage child brides.  Warren Jeffs is in jail for marrying underage girls in the FLDS Cult. Another such group is Tony Alamo Christian Ministries (he is now behind bars for abusing young girls he considered as wives.)

Wikipedia defines parental alienation as, “the process, and the result, of psychological manipulation of a child into showing unwarranted fear, disrespect or hostility towards a parent and/or other family members.”  Often, if one or both parents leave the group, the child is manipulated to cut ties with them and it can have long-term, devastating effects upon the child.

According to Dr. Baker, there are seventeen primary parental alienation strategies that have been scientifically identified. They fall into the following five categories:

Parental Alienation is a form of undue influence in which one parent deceives and manipulates the child to feel fear, anger, disgust, or other negative emotions towards the other parent. The alienating parent may attempt to instill false memories of abuse or phobias about the other parent in the child’s mind. They may encourage the child to spy and tattle on the other parent. In other words, parents who unethically alienate their child against the other parent use similar tactics that cults use to distance their members from family, friends, and ex-members. Unfortunately, with families within destructive cults, if one parent decides to leave, the parent still in the cult often is ideologically driven to poison the children against the parent who exited.

Systematic mind control programming of children against their non-custodial parent is absolutely dangerous.

Harmful Effects Continue as an Adult

People cannot form their own identity when being told what to believe all the time, especially when this starts at a young age before their brain is fully developed. Their ability to trust is affected and this continues into adulthood, even if they leave the cult. They have trouble forming intimate, lasting romantic relationships and friendships.  For others, they trust too much, possibly joining another high-control group.

The trauma of being raised in a destructive group is real and causes lasting harm. “Mind control can cause an unnatural state in a human being and cause them to form a new identity or use defense mechanisms to protect themselves. The cult experience can turn into a traumatic event leading the member to become traumatized and develop symptoms of posttraumatic stress (PTSD)…PTSD symptoms most commonly observed in ex-cult members are anxiety, depression, suicidal ideation, sleeplessness, violent outbursts, memory loss, vivid flashbacks, and somatoform disorder.” (Ilona C. Cuddy)

Children are precious and need our help so they are not harmed.  As I said last week, “This is an issue that needs immediate attention from everyone! Let us all speak out against these harmful practices demanding change and protection for children, inside and outside, any and all religious groups.  This is not religious freedom but child abuse. Enough is enough. We need to come together to better protect children from the damaging effects of cults!”

Freedom of Mind Approach to Helping Individuals born in High-Demand Groups from the 2015 ICSA Annual Conference in Stockholm, Sweden.