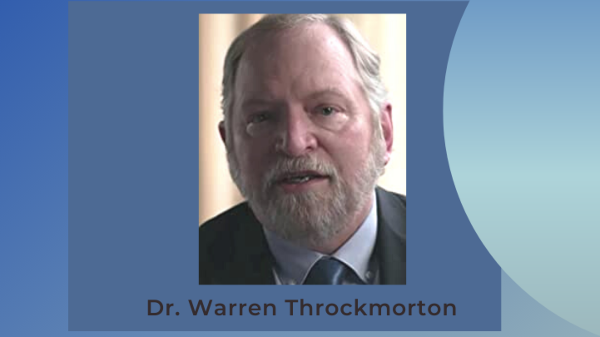 Is there a really a conflict between faith in science and faith in Judaism, Christianity, Islam and other world religions? I do not believe there should ever be a black/white, either/or mindset when it comes to listening to responsible medical experts and religious leaders. In the United States, there has been some negative media focus on white evangelical Christians. But I believe most evangelical Christians are not anti-science nor anti-vaxxers. I wanted to do this blog and interview in order to counter some of the negative media coverage portraying outrageous and far-fetched beliefs, such as denial of evolution or the belief that the COVID-19 vaccine makes people magnetic. The reality is, however, that many devout Christians, including evangelical Christians, support science. Many! There have been more than a few pastors who were preaching that COVID-19 was a hoax that got sick and died from the virus. Some 600,000 Americans have already died from the pandemic and yet many more still need to get fully vaccinated, as soon as possible.

Science and Faith: People Can Believe in Both!

My colleague, Dr. Warren Throckmorton, an evangelical Christian, is a Professor of Psychology at Grove City College, a conservative, Christian college. In addition to teaching, Throckmorton writes an excellent blog exposing lies and manipulations of authoritarian religious cults and exploring public policy and mental health issues.

I asked Throckmorton for his view on the COVID-19 pandemic and what he thinks about vaccination? He and his family are vaccinated. When I asked him about Christianity and science, he told me Biblical sources provide believers guidance. He pointed out that Timothy, a disciple of St. Paul, had a stomach ailment. He was not advised to pray or just have faith but to take a little wine (that is, treat the ailment). Luke, who wrote one of the Gospels, was himself a physician. God gave us incredible gifts: our minds, intelligence, and curiosity. Certainly, we are meant to use our minds and think and not allow irrational fears to cause harm and death.

Throckmorton also points to his colleagues at Grove City College, who are science and engineering teachers, and still maintain their strong Christian faith. Francis Collins, M.D., Phd., Director of the National Institutes of Health, is a devout Christian and believes that Christianity and science are compatible.

In his social psychology classes, Throckmorton teaches concepts by which to understand authoritarian groups, undue influence, and mind control tactics. I was delighted to learn that he teaches his students the BITE Model of Authoritarian Control as a tool for discerning and understanding influence.

In today’s political arena, a perplexing question is why so many people continue to believe Trump won the 2020 election, despite a mountain of evidence to the contrary? More than 60 lawsuits contesting the election results had been dismissed as of January 6, 2021. When predictions or prophecies do not come true, some people are able to accept that their belief was wrong and go forward. Others are unable to resolve the cognitive dissonance created by the failed prediction or prophecy and double down. (Leon Festinger’s book, When Prophecy Fails, is a landmark study on this subject.)

Throckmorton thinks we are still in a “shakedown” period when many people are wrestling with the effects of having their political expectations unfulfilled. No matter how unrealistic their beliefs and predictions may seem to others, the struggle to regain normalcy is difficult. I am often contacted by the family of someone who has been caught in such a situation. My advice is to be supportive but not combative. Trying to argue someone out of their beliefs is not usually effective. Be present to help the person free their own mind.

On a positive note, we are slowly starting to see this type of change. Recently, the Southern Baptist Convention elected Ed Litton as its president, signaling a defeat for the hard right within the nation’s largest Protestant denomination.

These two ideologies are closely related but somewhat different in focus and impact. Christian nationalism is the errant belief that our Founding Fathers intended to establish a Christian nation and that our laws and government should follow strict Christian ideals. Dominion theology (or dominionism) is based on the belief that there is a battle between God and Satan. Christians are in the battle on God’s side and must take dominion of politics and other aspects of culture. Those who oppose policies favored by these groups of Christians are knowingly or unknowingly doing the work of Satan. Therefore, they wrongly believe that Christians have the authority and the right to reclaim the world for God and to govern the world according to Christian theology.

The degree to which this process might involve violence and suppression varies—most Christian nationalists and dominionists would not endorse the use of violence. However, some do. These groups often begin with the Christian nationalist or dominionist theology but then grow weary of the political process and take matters to a more militant level. They begin to espouse the use of violent tactics such as the assault on the US Capitol in an attempt to overturn a democratic election. Knowing this can help us understand why the insurrectionists engaged in religious prayer and actions once they had stormed the Capitol. Their lawless actions and their religious beliefs were not in conflict.

Throckmorton and his colleague, Michael Coulter, wrote Getting Jefferson Right, as a rebuttal of the work of David Barton, a Christian nationalist who was an advisor in Ted Cruz’s presidential campaign. Barton and other religious conservatives frequently use untruthful and historically inaccurate claims regarding Jefferson to support Christian nationalism beliefs. Some of the Oath Keepers who participated in the Capitol attack parroted Barton’s ideas.

An apparent contradiction exists between the values espoused by evangelical religious groups and the real-life behavior of Donald Trump and so many of his associates. Why then has Trump gotten so much support from the Christian right?

Throckmorton explains that traditional, mainstream Christianity has been losing ground, but independent churches aligned with the New Apostolic Reformation (NAR) are becoming more influential. NAR is a movement based on Christian nationalism and dominion theology that has infiltrated into American politics. They also wrongly allow people to claim they are an Apostle or Prophet, speak in tongues, cast out “demons,” do faith healing, and other behaviors that conservative Christians avoid. In these groups, science and faith are often in conflict.

How can anyone religious think God is using Donald Trump? They wrongly believe that Trump is a mere tool in God’s plan to bring about the end times. Many of the prophecies associated with Trump, including the prediction that he would win the 2020 election, came through the NAR. When these prophecies did not come true, they incorrectly concluded that the election must have been stolen.

The Public Religion Research Institute recently reported that a quarter of white evangelical Protestants in America now accept the major beliefs of the QAnon conspiracy theory. Conservative Evangelicals are beginning to embrace the many conspiracy theories which threaten our Democracy.

Faith is Not a Problem. Blind Faith Is!

One of the main reasons I wanted to talk with Dr. Throckmorton and promote his work is that we need to have more grounded, ethical, and clear-thinking people like him to speak out and support the positive connection between science and faith. Faith in God (Christian or otherwise) itself is not the problem. But blind faith and denial of science and reality are. For the sake of our children and grandchildren, for the very survival of this planet, we must make political, health, and legal decisions based on scientific fact and truth.

Why Some Orthodox Jewish Women Won’t Get Vaccinated – The New York Times (nytimes.com)

Convergence of Far-Right, Anti-Democratic Factions in the Northwest Could Provide a Model for the Rest of the Nation | Religion Dispatches

‘Our Lord Isn’t Woke.’ Southern Baptists Clash Over Their Future.

Southern Baptists elect Ed Litton as their president, a defeat for the hard right