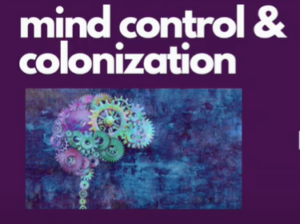 When most people think about cult mind control, they envision fringe religious leaders. In reality, cult mind control is used in many different circumstances: human trafficking, multi-level marketing, violent extremism. I strongly believe that it is important to bring attention to the fact that authoritarian mind control has played a significant role in the terrible genocide perpetrated by colonizers against Indigenous People in the United States and Canada.

How does mind control relate to colonialism?

Mind control is formally known as undue influence. In US law, undue influence is defined as excessive persuasion that overcomes a person’s free will causing him to act (or refrain from acting) in ways he otherwise would not.

I developed the Influence Continuum and BITE Model of Authoritarian Control to help identify the ways cults indoctrinate and control people. BITE stands for behavior control, information control, thought control, and emotional control: these are the tactics that cult leaders use to manipulate people’s minds.

The Diagnostic and Statistical Manual of Mental Disorders—which is published by the American Psychiatric Association—is a tool used by clinicians and policymakers. It contains a designation (300.15) for victims of cult brainwashing. According to the manual, “Individuals who have been subjected to intense coercive persuasion (e.g., brainwashing, thought reform, indoctrination while captive, torture, long-term political imprisonment, recruitment by sects/cults or by terror organizations) may present with prolonged changes in, or conscious questioning of their identity.”

My BITE Model and Influence Continuum are useful tools to help identify and describe the ways that colonial governments have used undue influence. To sustain flagrant human rights abuses and theft of lands and resources, colonial governments used cult mind control tactics on Indigenous people and non-Indigenous alike to legitimize the cruelty and to pacify the population.

I first learned about Kurt Lewin’s model of Unfreezing, Changing, and Refreezing in the 1961 book, Coercive Persuasion by Dr. Edgar Schein. Disrupt (unfreeze) a person and community’s identities) so they can be indoctrinated (changing) into the new belief system and code of behavior, and refreezing the new, cult identity that suppresses the original identity.

For example, by forcing Indigenous children to attend residential schools where they were required to abandon their culture, and by brutally stealing their land, colonizers were stripping Indigenous people of their identities and establishing coercive control.

Historically, colonizers have exerted undue influence on Indigenous peoples to destroy their culture and force them to assimilate.

In both the United States and Canada, from the 19th century until the 1970s, Indigenous children were forced to attend state-funded boarding schools, where they would be forcefully taught to assimilate and abandon their native culture. In the United States, federal law promoted the “civilization” of Indigenous peoples. At these schools, children had to have their hair cut short and were not allowed to speak their native languages or practice their religious rituals. Children would even be beaten for simply saying hello to each other in their own native language.

“Legal” Justification for Colonial Cruelty: The Doctrine of Discovery

The brutal mistreatment of Indigenous peoples has occurred on this continent since long before our country’s founding, and the effects of colonialism still influence our laws and society today.

Historians estimate that 100 million Indigenous people lived in North America when Christopher Columbus first arrived in 1492. Columbus and the European colonizers that came after kidnapped, tortured, enslaved, raped, murdered and stole land from the innocent people living here, and The Doctrine of Discovery was seen as justification for their actions.

The lingering effects of the Doctrine can be seen in the United States’ current legal system.

The Doctrine made its way into U.S property law after the 1823 Supreme Court decision Johnson v. M’Intosh ruled that successors of European colonizers have the exclusive right to buy land from Indigenous peoples. Even as recently as 2005, Justice Ruth Bader Ginsburg cited this 1823 court case in a ruling that determined that the repurchase of tribal lands did not restore tribal sovereignty.

The legal justification for the mistreatment of Indigenous peoples demonstrates how powerful and destructive coercive control tactics were and are.

Attempting to Move Forward from Colonialism

While the role that mind control played in the subjugation of Indigenous peoples often goes overlooked, it is important to understand that mind control is complex and appears in diverse situations. And undue influence knows no cultural or geographical bounds.

Throughout history, colonizers have used cult tactics to maintain a system of oppression against marginalized racial groups. For Indigenous peoples from this continent and beyond, undue influence from colonizer governments has been at work for centuries.

Despite what many people think, colonialism is not a relic of the past; it is still with us today. It manifests in human rights abuses, chronic underfunding of public services, exploitation of natural resources, water rights, and more. To move forward, we all need to do what we can to acknowledge our shared history and join the Indigenous leaders who are working to right these wrongs.