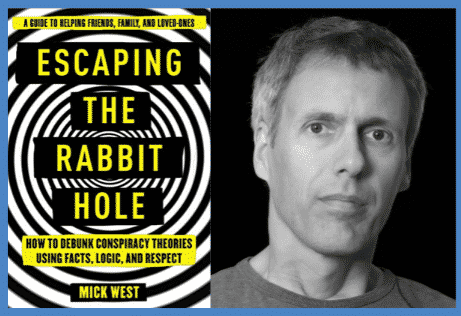 Mick West–debunker, skeptic, writer, and podcaster–recently interviewed me for his podcast, “Tales From The Rabbit Hole” where we discussed cults, the intersection between cults and conspiracy theories, and my book: The Cult of Trump. (Listen to Episode 44: Steven Hassan – Cults and Conspiracies.)

Tales from the Rabbit Hole is an interview-style podcast focusing on people whose lives have been affected by the conspiracy theory rabbit hole. Guests include both former and current believers in a variety of conspiracy theories, as well as debunkers, skeptics, and the investigators of those theories.

There was such an intersection between my work and Mick’s that I invited him to my channel for an interview.

He grew up very interested in topics like UFOs and Science Fiction, which developed into a lifelong love of science. After a successful career as a video game programmer (Tony Hawk), he retired to pursue his hobbies and interests. One of the first things he did was take flying lessons. This tied in with his new-found hobby of writing about science and conspiracy theories when he learned about chemtrails conspiracy theories. He started a blog on that (contrailscience.com) and later a more general discussion forum, Metabunk, which covers everything from Vaccines and 9/11 to Flat Earth and reptile shape-shifters.

In 2018, he wrote Escaping the Rabbit Hole – How to Debunk Conspiracy Theories using Facts Logic and Respect. This was a distillation of what he had learned from all of his interactions with believers and former believers in conspiracy theories. While researching his book, he interviewed many people. These were often fascinating conversations, and so wished to share them with a wider audience. Something that came up over and over is that people were often polarized, often totally ignoring or ridiculing other viewpoints, and sometimes not even aware that those viewpoints existed.

Interview and Discussion With Mick West

I was surprised that I had never heard of Mick and, so, I got his book, read it, and really appreciated his approach, which is very much congruous with my own. Mick West draws upon his debunking experience and research to provide useful tools and suggestions on how to help friends and loved ones recognize and find their way out of conspiracy thinking, as I have done with destructive cults. There is a great amount of overlap between our work. Some ideologies in religious and political cults are based upon conspiracy theories. And while we both come at this subject from a different angle, we have the same goal and similar methods for helping people.

I use the Influence Continuum to help people figure out ethical from unethical influence.

Mick uses a spectrum model and puts conspiracy theories on a scale of 0 to 10 in terms of extremeness. All conspiracy theories exist somewhere on a spectrum from very boring (like “Big Pharma” purchasing results to get drugs on the market) to the more extreme (such as 9/11 being orchestrated by the American Government).  And these can vary for different people. 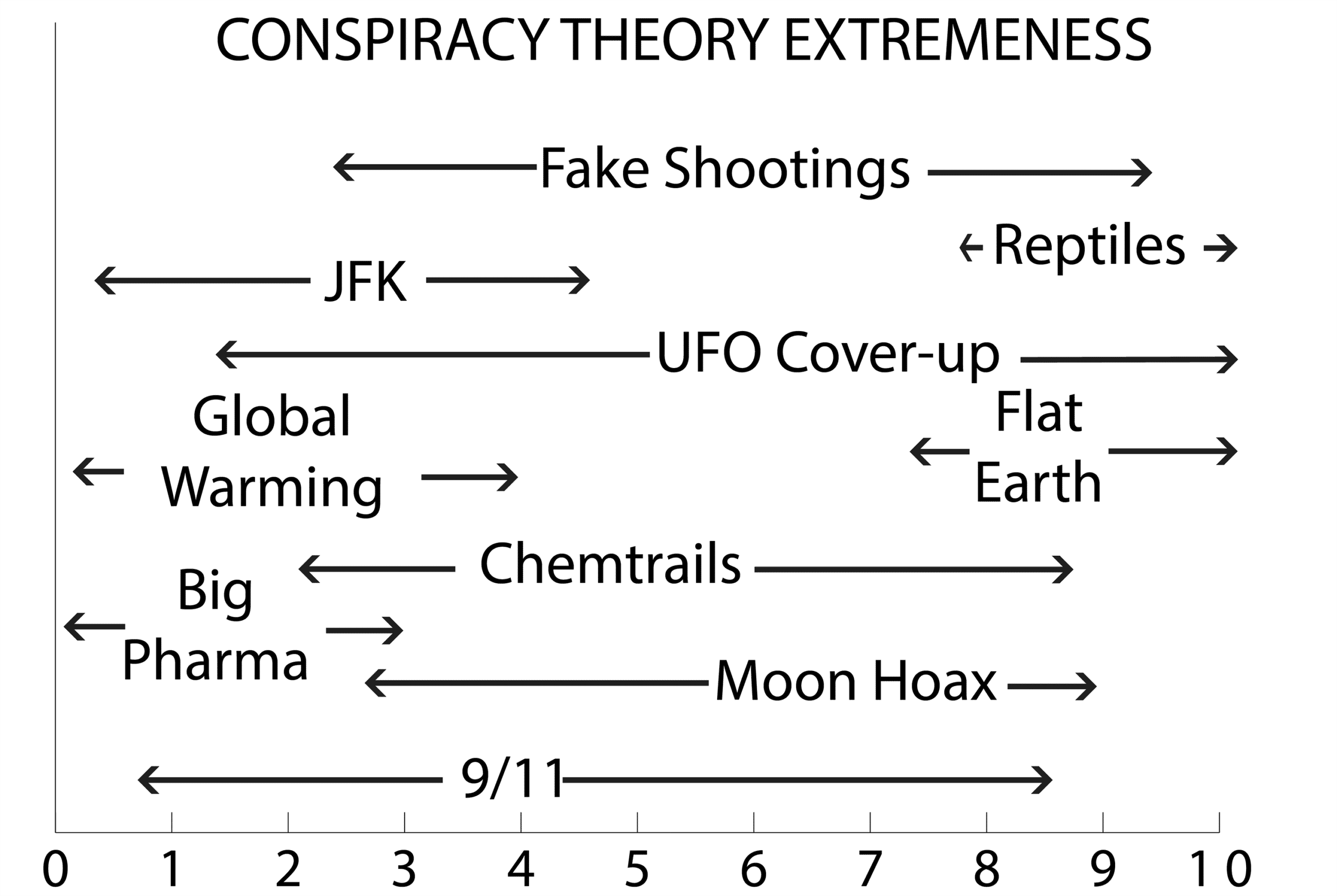 You don’t necessarily slice through all of these in exactly the same way but each person has a line where on one side of the spectrum of that line they think that everything is a sensible theory and on the other side of the line, everything is just silly nonsense and disinformation designed to confuse people. Knowing where that line falls is really important when talking with people. 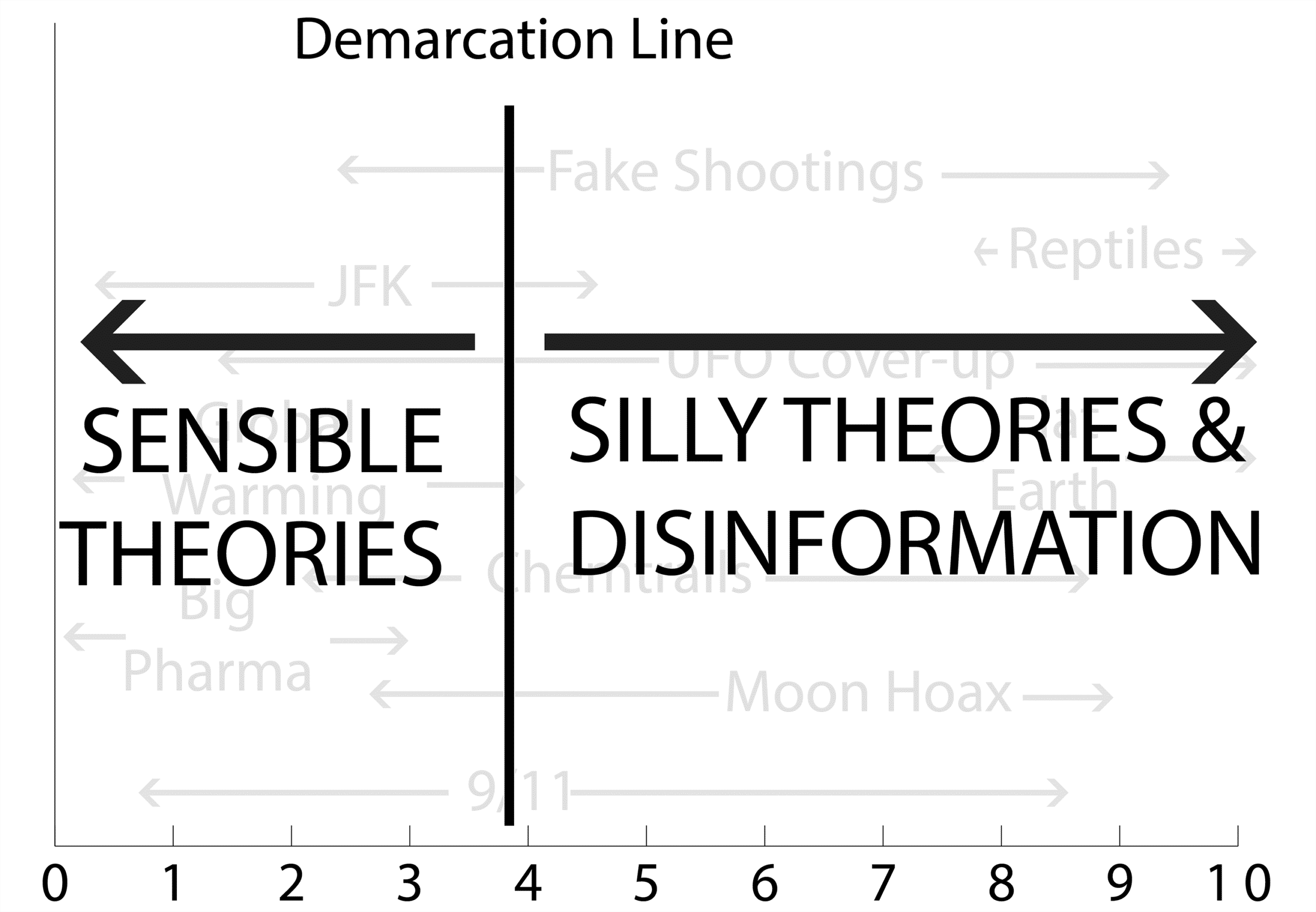 You want to focus your conversations around the subjects that are on that line, not around things that they think are so obvious everyone believes them. There has to be room to maneuver the discussion. Customize the approach for the person and where they delineate themselves. Show them the conspiracy spectrum and ask what they think and believe.

There are variations of extremeness in conspiracy theories such as the moon hoax, flat earth, UFOs, and 911 being an inside job. Critical to being effective in debunking is to not speak condescendingly or ridiculing them. Present factual information and be trustworthy.

People are more likely to listen to a friend or family member that they like and trust. Be patient. Do not try to do a knockout punch in a single conversation. Keep in mind that, for some, it took years to implant these beliefs and it will take time to undo those beliefs.

We have to hope that they are open to change at the right time in the right circumstances with the right evidence. Keep the relationship going and lines of communication open. Do not give up too early over frustration or lack of immediate results. And supply useful information.

There are two ways to do this: spotlight and floodlight debunking. Spotlight debunking involves fact-checking. You see they make a claim and you can fact-check that one claim and show it to be wrong. Floodlight debunking involves supplying a much wider field of information, including stuff they may have missed or got wrong. You can fill in the missing information and provide context and a foundation for thinking in which they can essentially help themselves out of the rabbit hole. Former believers can share their personal stories.  Plus, you can show the things an organization has done that they may not realize.

Question everything. Be transparent. Admit when you are wrong and be quick to correct yourself. Offer to watch one of their videos if they watch one of your videos. Follow up with a discussion. Look for common ground. If they make a valid point, concede the point.

While it may sound completely ridiculous to you, it is very real to them. Show respect and patiently engage. You will see the results.

One example of this is that of David Weissman. He was a self-professed MAGA troll and Sarah Silverman respectfully, patiently and strategically engaged with him on social media, ultimately waking him up. (Ex-MAGA Troll David Weissman Gives Interview about His Process of Realizing That Facts Matter.)

Even more dangerous is the notion that the deadly and highly contagious coronavirus, COVID-19, isn’t a real threat. One video being circulated on social media is the Plandemic movie featuring Dr. Judy Mikovits. Plandemic is a 26-minute conspiracy theory video released in May 2020 that promotes a variety of falsehoods and misinformation regarding the COVID-19 pandemic. This false information puts all of us at risk.

To debunk this movie, Mick West recommends a video by Dr. Mike Varshavski where he responds point-by-point and fact checks the biggest claims made in this conspiracy theory movie. You can watch it here.

Additionally, there’s a false theory that there’s some correlation between the location of deployments of 5G networks and outbreaks of the COVID-19 coronavirus, at that location. Mick debunks this here.

Many that come to my website and read my blogs have friends and family that are still part of destructive groups.  We can learn much from Mick West, his book, websites, and interview. If you wish to contact Mick West:

Steven HassanConspiracy Theories, Cults and How to Help Friends and Loved Ones with Debunker Mick West05.22.2020