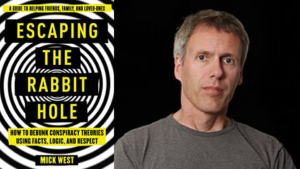 Several years ago, Mick West invited me to be on his podcast focusing on conspiracy theories, how they can damage lives and how to debunk them. West is known for his work debunking conspiracy theories including 9/11 Truthers, Flat Earthers and QAnon. I recommend his excellent 2018 book, “Escaping the Rabbit Hole.” West and I have arrived at very similar conclusions about some effective ways to approach this complex issue. Needless to say, conspiracy theories can become deeply held beliefs and it is not a simple thing to help people escape from their damaging effects.

Mick West had a very successful career as a programmer and was one of the leading developers of Tony Hawk’s Pro Skater games. After retiring, he decided to pursue a pilot’s lifelong dream of becoming a pilot. During his training, he became aware of the chemtrails conspiracy theory. However, West began blogging about a conspiracy theory involving infestation by parasites, called Morgellons Disease. This medical self-diagnosis claimed that a parasite infestation caused fibers to come out of the skin. Fibers could be seen on the skin by using a magnifying glass. The theory was initially promoted by Mary Leitao, who got connected to a publicity source and began promoting the theory. Doctors themselves were not, in actuality diagnosing the disease. West wrote a blog on this and it garnered significant media attention. However, when the CDC did a study raising serious questions about the existence of Morgellons, media attention dissipated significantly. The West then turned to chemtrails conspiracy theory. Chemtrails is the white cloud-like trails left behind when a plane passes overhead. To believers in the conspiracy theory, these trails actually contain chemicals the government is using for various purposes, such as weather modification or human population control.

Where do Conspiracy Theories Come From?

Someone who has not fallen down the rabbit hole of conspiracy theories often has a very hard time understanding how any sane person would fall prey to the phenomenon. Lack of understanding the issue of undue influence might lead to the incorrect opinion that such a person is just stupid and gullible. Otherwise, who would believe aliens have landed on earth or microchips were put into vaccines to gain control over people?

In fact, humans are hard-wired to seek order and meaning in a way that gives them a sense of mastery over their lives. It is normal for humans to look for confirmation of already held beliefs and to want to feel special. As social beings, humans are very susceptible to psychogenic contagion, and under the right set of circumstances, anyone can “catch” a conspiracy theory that provides a simple explanation for what is actually a complex situation. Belief in a conspiracy is frequently more of an amplification of normal behavior, not evidence of separate and distinct psychological pathology. Conspiracy theories can be difficult to debunk because the technical information necessary to understand many phenomena is often highly sophisticated. That is one reason why sources of reliable information such as West provides are so important.

Interacting with someone who believes in a conspiracy theory can be very frustrating. It is difficult not to become impatient and react with anger. Frustratingly, using logic and reason in a persuasion attempt to convince them that their belief is wrong typically backfires.

West developed a chart by which to assess the extremeness of different conspiracy theories and a way to mark where a particular individual may be on this spectrum. This information will be helpful when interacting with someone who believes in one or more of these theories. Mick West kindly granted me permission to reproduce his chart in the blog about our first interview.

West and I agree on behavioral approaches that support an effective approach. The following are important for family and friends and critical for mental health professionals and members of the legal profession to understand in their professional practices.

A very inspiring story that highlights the effectiveness of these approaches is that of Daryl Davis. He is a black musician who interacts with Ku Klux Klan members and has “de-radicalized” hundreds of Klan members through respectful listening and dialogue.

Social media sites and other forms of media need to control, by government mandate, if necessary, the proliferation of conspiracy theories and disinformation of all kinds. While belief in conspiracy theories is certainly not new, the internet and proliferation of social media sites have provided them with an almost unlimited audience. Millions of people can access quick and easy answers to life’s most profound complexities with a simple click of a button.

Distrust of government is sometimes warranted, and healthy skepticism is not necessarily a bad thing. However, rampant conspiracy theories are dangerous because they fuel an unwarranted distrust in government. This distrust significantly reduces and even eliminates willingness to consider the common good and causes a serious breakdown in civil discourse and cooperation.

Being willing to pursue truth by identifying reliable sources of information and being open to more complex explanations is critical. The survival of our democratic way of life depends on it.

Podcast: Conspiracy Theories and how to talk to people who’ve become lost in them with debunker Mick West