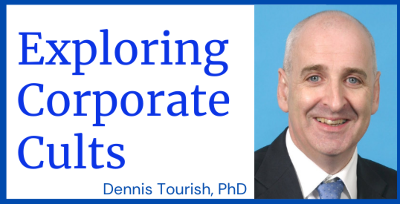 Every business has its own corporate culture. Yet many companies have been accused of being run like an authoritarian cult by former employees and observers. Many factors are involved in creating this culture, including the values and personalities of the founder(s), the goals of the organization, styles of leadership and reward systems. When these factors are driven by a narcissistic or unethical person, the business can easily become a corporate cult.

One of my colleagues, Dr. Dennis Tourish, has done interesting research on corporate cults. Dr. Tourish is a professor of leadership and organization studies at the University of Sussex, and author of numerous books and publications on organizational leadership styles and political cults. On the Edge: Political Cults on the Right and Left, which he co-authored with Tim Wohlforth, was one of the first books to document political cults from both ends of the political spectrum and explore their significance in mainstream politics.

Both Dr. Tourish and I have studied organizational change and development. I recently completed my doctoral program in this concentration. We both have considered the ways that the business world has incorporated psychological concepts based on studies of mind control and coercive influence. Tourish says it was a big surprise for him to learn that Edgar Schein, who studied communist brainwashing during the 1950s, was “legendary” in the business world. Other psychologists who have influenced business practices are Robert Lifton, MD, and Margaret Singer, PhD.

In the 1950s, corporate leadership style was primarily “command and control.” Most employees stayed at a company for their entire working career and expected to retire with a pension. With the advent of the internet, along with increased understanding of human psychology, styles of corporate leadership moved more toward what is known as “transformational leadership.” In this style, leaders are expected to encourage and motivate employees, and elicit ideas from their employees to help shape the future of the company. The trend was to move away from seeing organizations as machines, and take account of beliefs, behavior, knowledge, sanctions, values and goals. (“Transformational leadership, corporate cultism and the spirituality paradigm: An unholy trinity in the workplace.” Tourish, D., & Pinnington, A., 2002)

While this style of business leadership sounds extremely positive and seems to encourage free thinking and input by employees, it can actually foster more authoritarian control. The emphasis on corporate cohesion and unity of belief and purpose is fertile ground for creating a corporate cult. Charismatic leadership can have a very dark side.

Cults exist in different formats. They may be religious, political, or secular, and may be designed to gain power, money, fame, or a combination of all three. Some organizations might not be full-blown cults in the traditional sense but have many cult-like features. Assessing the degree of authoritarian control in any particular organization is not simple or easy to do. That is one of the reasons behind my development of the Influence Continuum and BITE Model of Authoritarian Control. The Influence Continuum, an integral part of the BITE Model, is a tool by which to assess the degree of coercive control in an organization or individual relationship.

Authoritarian cults, whatever their particular focus, often include:

Dr. Tourish has done an in-depth study of Enron and the effects of charismatic leadership, particularly in the persons of Kenneth Lay and Jeffrey Skilling. Lay and Skilling promoted a compelling totalistic vision. Their recruitment system was designed to elicit a conversion-like experience. The culture of Enron was one of conformity and penalizing of dissent. In June of 2000, the Economist suggested that Enron could be viewed as ‘some sort of evangelical cult.’

Another business that operated as a corporate cult was Theranos. At its inception, Elizabeth Holmes, a 19-year-old, charismatic, Stanford University dropout, claimed she had developed a revolutionary technology by which numerous medical tests could be performed from a single drop of blood. Holmes became the youngest female billionaire on Wall Street, was photographed with Bill Clinton, and convinced such luminaries as Henry Kissinger to be members of the Board of Directors. What made Theranos a cult? There was major emphasis on Holmes as a personality. She characterized the mission of the organization as being the most important work in the history of humanity, and said she was trying to build a religion within Theranos. Holmes told her employees that if they did not consider the work of Theranos as the most important thing in the world, they should leave. Employees were subjected to surveillance from CCTV footage and expected to work long hours without additional compensation.

Enron and Theranos are just two examples of the ways corporations reflect the culture and tactics of cults. In 2005, I was interviewed by Douglas Atkin when he was writing the book, The Culting of Brands: When Customers Become True Believers. Atkin wrote this book to show companies how they can build a loyal customer base by using cult-branding techniques. Marketers and corporate leaders use these techniques to retain a loyal customer base, as well as cultivate loyal employees.

During our recent conversation, Dr. Tourish and I also discussed some of the critical issues in US politics, the rise of authoritarianism, and political and religious violence in many areas of the world. It is easy to become discouraged and feel there is no hope for a better world. But there is a great deal of hope. We can continue to emphasize and encourage respectful dialogue in the public arena. We can advocate for our education systems, from elementary school on, to teach the skills and information necessary to protect ourselves from undue influence and coercive control. And we can take inspiration from the thousands of courageous people who have freed themselves from the effects of cult indoctrination and gone on to live productive and meaningful lives.