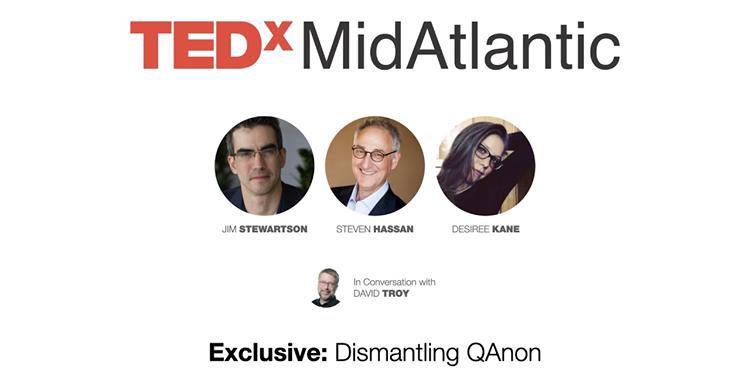 Assuming the predictions are accurate and there is a Biden/Harris landslide, what will happen with the millions of people who believe that President Trump is a man of God doing Apocalyptic fulfillment, especially QAnon followers? This is an important question as most of us have friends or family members that are affected. I wanted to share an incredibly important TEDxMidAtlantic event, entitled “Dismantling QAnon.”

With this in mind, for the last few months, I have been doing a deep dive on QAnon, having written several blogs, articles and featured interviews. There are more on my media page for The Cult of Trump book.

People need to become more educated about cults and undue influence. Also, they need to have a deeper understanding of the origins of QAnon, why it makes people addicted and programmed and how to help people start reality testing in order to exit the rabbit hole. Critical media needs to stop demonizing believers along with minimizing it down to just a conspiracy theory. It is much more. It is actually a cult of psychological manipulation intentionally done to make people afraid, polarizing to divide, and even moving some to violence.

At its root, the scheme functions as an authoritarian cult. Through that lens, it can be properly understood as being based in a crisis of connection. During this pandemic, when so many people are feeling disconnected and off-balance, we are all more susceptible than ever to undue influence and unethical manipulation. We explored ways to become more resilient against it.

This program featured alternate reality gaming expert Jim Stewartson, Native American multimedia journalist Desiree Kane, in conversation with TEDxMidAtlantic co-curator (and disinformation specialist) David Troy. It offered a broad overview of the networks involved — with clear-headed ideas about how this destructive movement can be ended safely.

Among the areas covered: QAnon has its roots in the internet puzzle “Cicada 3301”; that a network of former disgruntled military and intelligence professionals has collaborated to lend the scheme legitimacy; that various people involved are connected to a 1930’s cult called “I AM”; that many people involved with QAnon were also involved in the 2011 “Occupy” protests and NODAPL protests at Standing Rock in 2016-2017 — and even connected to the makers of the 2020 COVID disinformation film, “Plandemic.”

Please take a moment to watch and share this important program with the people in your network. (Direct link to YouTube Recording.) If you have family members or friends affected by this or other similar destructive movements, there is hope, and help is available. And if you are involved with the media or research community, feel free to follow up with the presenters. Together, we can help slow the growth of harmful authoritarian movements. #igotout