Does Trump Display the Stereotypical Profile of a Cult Leader?

There are many reasons to be saddened, disgusted, confused, outraged, scared, and even traumatized by Trump’s presidential campaign. He has just declared a “scorched earth policy” and is saying there is an “international conspiracy that is persecuting him” and he is just a “martyr for the cause of America.”

In studying cults and their leaders for 40 years, certain patterns consistently are evident in their words and behaviors. Based on my own experience being near Sun Myung Moon (him too a billionaire, claimed to be the Messiah and 10 times greater than Jesus Christ), I wish to offer a way of actually analyzing Trump. My work is based on brainwashing and mind control models put forth by Robert Jay Lifton M.D. and Dr. Margaret Singer. My BITE Model and the Influence Continuum is an objective way to evaluate any person (yes, there are cults of personality) or group. Indeed there are ethical ways which are healthy and well as unethical, unhealthy ways to influence people. Please take a look. While most people and groups lie more in the middle of the spectrum, Trump apparently typifies the extreme destructive right hand side. 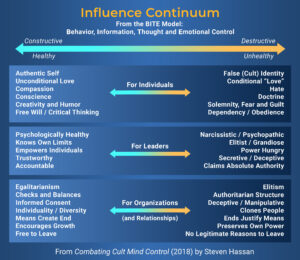 Please review the right side of the continuum. Donald Trump seems to fit the description to a T and his movement is looking more and more like an extremist ultra right-wing cult. This is a perfect opportunity to learn how undue influence works! Donald Trump’s childhood church and its leader Norman Vincent Peale apparently instilled magical thinking and thought-stopping behaviors. Trump was raised to believe that if you are 100% committed to a belief, then God would make it happen. Doubt is evil. There is no room for skepticism, constructive criticism, reality testing, introspection, or any of the other tools that are necessary for having freedom of mind.

And now, as the 2016 GOP presidential nominee, Trump has turned these beliefs and practices onto others in order to recruit, indoctrinate, gain power, and deflect criticism. See for yourself. See how my model compares to Trump’s words and behavior in this election season:

For members of a cult:

False (Cult) Identity- be loyal, be obedient. Trust the guru Trump
Receives Conditional “love” based on Level of Conformity
– reaction to withdrawn endorsements by Paul Ryan and others
Morality Determined by Doctrine instead of Conscience
Solemnity, Fear, and Guilt
– fear: demonizing of Clinton and Obama
Dependency on the Cult
Obedience to the Cult Leader

For the leader of a cult:
Narcissism
– blog on Narcissism
Psychopathy
– callous attitude toward assaulting women. Delusional, Malignant lying
Elitism
– claims to be “special”, Brags of his wealth, his expertise, better than anyone else
Grandiose Thoughts and Behavior
– “I have the best words…” “Tremendous,” “huge,” giant border wall
Insatiable Hunger for Power, Money, Sex, Fame
– countless enterprises: steak, university, towers with his name on them in gold…
Pattern of Deception and Manipulation
– fact check counts say he lied every 3 minutes in one debate
Claims of Absolute Authority
– “I am the only one that can fix this,” “I am the only one that can protect you”

For the cult organization:
Authoritarian Structure
Has Separate Insider / Outsider Doctrines
– “dogwhistles” to white supremacists, “media” code for Jews, Pence’s denials
Encourages Members to Conform to Senior/Model Members
Ends Justify the Means
Prioritizes Preserving its Own Power
No Legitimate Reasons to Criticize or Leave the Cult

It appears that the “game plan” for the rest of Trump’s election is to continue to claim that the Clinton’s are part of an evil conspiracy. That America is going to hell, unless people follow him. I am reminded by words written in 1954 by Eric Hoffer in his classic text, The True Believer, “Usually, the strength of a mass movement is proportionate to the vividness and tangibility of its devil.” By looking at the hate vitriol and blatant conspiracy theories his people are constantly putting out, the “devil” card seems likely to make him lose the Presidency but will succeed in harming not only America but the world. The fact that Trump has no real plan, no real policies that are implementable and that GOP donors are distancing from him makes me more hopeful. I can only hope that the public will come to understand the bigger patterns of undue influence and characteristics of cult leaders.