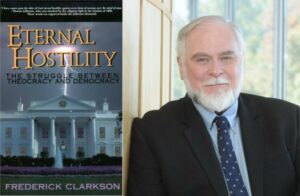 On the most recent episode of my podcast, The Influence Continuum I interview author and journalist Frederick Clarkson. He has spent over 40 years researching and writing about the religious and political right. His work has appeared in a wide range of publications including Mother Jones, Ms. Magazine, The Christian Science Monitor, and Religion Dispatches. He is currently a Senior Research Analyst at Political Research Associates, a progressive social justice think tank in Somerville, Massachusetts.

Clarkson co-founded and has continued to work with BlitzWatch, a coalition that the political efforts of Project Blitz. According to the BlitzWatch website, Project Blitz “is a coordinated effort by Christian Nationalists to inject religion into public education, attack reproductive healthcare, and undermine LGBTQ equality using a distorted definition of ‘religious freedom.’”

Christian Right political organizations have been important political players in the United States for many decades, and several have successfully managed to learn how to use Democratic electoral processes to erode Democracy.

Clarkson broke the story of one such Dominionist political movement in Colorado school board elections in 2021 — and how those elections turned out.

Andrew Womack is the co-founder of the political broadcasting operation, Truth and Liberty Coalition. He also is the founder of Charis Bible College, an unaccredited Dominionist bible college. Last year, Womack, with the help of third-year college students, mobilized the Truth and Liberty Coalition to recruit and train candidates for Colorado community school boards. In what Clarkson calls a “pilot project,” they organized campaign training and supported candidate slates. They created a voter guide that showed candidates’ positions on only five issues only: critical race theory, parental rights, “boys playing girl sports,” sex education, and gender identity pronouns.

Many of the candidates backed by the Truth and Liberty Coalition won their elections.

Similar movements have been organized by far-right Christian groups all over the country. They have found success in getting people angry and mobilizing them to turn out to take over school boards. They fire people up by claiming that public schools are teaching anti-Christian topics and that Christians’ religious freedoms are being violated. However, in reality, these Christian political groups plan to infringe on other people’s freedoms by electing school board representatives who will inject their own religious and political views into public school curricula.

Clarkson helped me realize that, decades ago, when I was recruited into an authoritarian cult, my religious freedom had been violated.

Forty-five years ago, I left the Moonies, a far-right pseudo-Christian authoritarian cult. Before I joined the Moonies, I was raised Jewish and had no interest to change religions.

When I was approached by Moonie recruiters in the Queens College cafeteria, they lied to me when I asked and was told that they were not part of any religious group. They did not tell me that they believed Sun Myung Moon was the Messiah. Or that members bow three times before an altar with Moon and his wife’s photo on it every Sunday at 5:30 am. Or that Moon performed mass wedding ceremonies. They did not tell me that they had recruitment quotas or that they were going to pressure me to go to a weekend workshop, then drop out of college, donate my bank account and throw out over four hundred original poems that I had written.

If I had been fully aware of all of the Moonies’ beliefs and practices from the beginning, I never would have agreed to join. I would have told them to leave me alone and would have had them removed from campus. Because I was not provided vital information, I was not able to give them my informed consent. By conning and indoctrinating me into a group without my informed consent, the Moonies violated my religious freedom as a young Jewish man — tearing me away from my Jewish identity, beliefs, and community.

Religion Can Be Used to Cloak Many Things

Cult apologists often cite “religious freedom” as a reason why authoritarian cults should be able to legally continue to operate as they do currently. (There are business, psychology, political and many other kinds of non-religious cults.) Apologists oppose any legislation that restricts the abilities of authoritarian cults to indoctrinate and asset control over unsuspecting individuals. However, as Clarkson points out in our interview, “religion can be used to cloak many things.” Authoritarian cults are not about religion. They are about asserting and maintaining control over a group of people.

Similarly, despite what supporters claim, current efforts in state legislatures to ban discussion of LGBTQ topics in schools, to prohibit the teaching of critical race theory (something that is not actually taught in public schools), and to restrict the rights of transgender students are not about religion or religious freedom. They are about gaining political power for members of the Christian far-right and suppressing the voices of marginalized communities.

To truly preserve religious freedom in the United States we all need to do everything we can to lobby our politicians and work to elect representatives who will fight against attempts by far-right Christian groups to attack people’s rights and inject their religion into public schools.

The Freedom of Mind: The Attempt to Redefine Religious Freedom

Eternal Hostility: The Struggle Between Theocracy and Democracy by Frederick Clarkson

Dispatches from the Religious Left: The Future of Faith and Politics in America by Frederick Clarkson

“IF EVERY CHURCH SAID, ‘WE WILL TAKE OVER OUR COMMUNITY’”: THE (CHRISTIAN RIGHT) REVOLUTION STARTS SMALL AND LOCAL

BABY WE WERE BORN FOR WAR: TO DOMINIONIST CHRISTIAN GROUPS, NO ELECTION IS TOO SMALL — AND COLORADO IS JUST THE BEGINNING

Christian Right Denialism is More Dangerous Than Ever: a Reporter’s Guide to the New Apostolic Reformation Part I

When it Comes to Societal Dominion, the Details Matter: a Reporter’s Guide to the New Apostolic Reformation Part II