Exvangelicals Find a Voice and Speak Out Against Authoritarianism 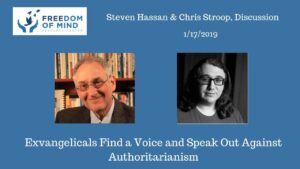 A few weeks before the 2016 Presidential election, Stanford Russian history Ph.D. Dr. Chrissy Stroop wrote an article, “After the Trump Tapes: Evangelical Authoritarianism Revisited.” In it, she shared her concerns about what she saw was a powerful group of people publicly defined as white evangelical Christians who were supporting Trump and who exhibited the characteristics of an authoritarian movement. While many might not identify with the term Dominionism directly–the belief that Christians should take over America and the world and make it Christian in a very narrow way–they were Christian nationalists pursuing a de facto, and sometimes explicit, Dominionist political agenda. The majority of white evangelicals appear to wish to create a theocracy and abolish the separation of Church and State, something the founders of our country explicitly wish to make sure did not happen.

We are now in the longest government shutdown in U.S. history at the instruction of Donald Trump over his insistence of Congress grant billions of dollars to build a “Wall.” Trump even did a national speech from the Oval Office and described what experts say is a fake crisis, ignored many facts, and actually told lies. However, polls estimate some 38% of Americans still believe in his leadership, despite many indictments being issued regarding Russian involvement with his election. The majority of white evangelicals appear to be blindly faithful to the belief that Donald Trump is God’s man and is being used to do “Divine” work. I was fortunate to arrange an interview with Chrissy Stroop which I wish to share. I found her to be extremely intelligent, articulate, and knowledgeable. I wanted to know about the movement called Exvangelicals and how it interfaced with my 40 plus years of working with people involved in destructive cult groups.

“Exvangelicals, then, are by and large proponents of feminism, intersectionality, racial justice, and LGBTQ rights. We don’t seek a common metaphysics or (a)theology, but rather seek to build bridges between those of us who have left evangelicalism for no religion and those of us who have departed for healthy religion. Many of us have religious trauma, and we began finding each other around the time of the 2016 election to foster our own healing through mutual understanding and the validation that comes from knowing we’re not alone. Leaving hardline faith communities can, after all, be extremely isolating.

At the same time, we’ve used our increased visibility, often through hashtag campaigns, to expose evangelical authoritarianism to the broader American public, something that major media outlets have mostly failed to do. Exvies contend that we are stakeholders in national discussions of evangelicalism, and should be treated as such. In 2018, we made significant progress in terms of gaining a recognized presence in the public sphere.”

Chrissy Stroop and the BITE Model

I reached out to Chrissy after our interview and asked if she had time to look at my BITE model and I asked her to comment.  I think she is so eloquent, that with her permission, I am putting her response here.

I did look at your BITE model and Influence Continuum.

I can say that each of the four elements is common in evangelical subculture, if not in the most extreme forms. Certainly, evangelicalism encourages black and white, good vs. evil thinking, teaches that it has the only and absolute truth, and turns other sources of information into outsider doctrines. Often your access to information is not directly restricted by a church or, if you’re a child, how much your parents restrict your access to non-evangelical/fundamentalist reading material varies widely. But the insistence on positivity and the desire to control and curtail emotions is also present, and even if, for many evangelicals, it’s perfectly fine to leave one particular church and join another, if you stop believing in things like biblical inerrancy and/or break with right-wing politics, you will be seen as out of the fold and “brainwashed.” I have been accused of being brainwashed multiple times. Some evangelicals practice shunning; as a rule, evangelicals do not respect others’ boundaries, so that, even if families and church friends don’t directly shun or “ghost” on “rebellious” members, interactions with them may become unbearable, because they try to bring you back in. They try to control the narrative of your life–if you leave the faith, you were “never saved” in the first place, for example. As a result, some people who leave evangelicalism have to cut off contact with their evangelical family members for their own mental health if the family has not cut them off.

This will bring me around to the #Exvangelical movement. Leaving evangelicalism absolutely comes with high social and psychological costs, even if you’ve experienced the “kinder and gentler” end of the evangelical-fundamentalist spectrum. Everyone who leaves will be subjected to gaslighting. It’s an alienating and isolating process, and often a protracted and painful one. By coming together as a community and movement, we are able to understand that our thoughts, feelings, and experiences are valid, that we were in an abusive kind of religion, and that we are very much not alone. Collectively, we find the validation needed to reclaim our own stories, to no longer allow evangelicals to own them, to turn us into morality tales. I do not claim to have started the Exvangelical community and movement. Its growth is something that has happened largely organically, but I have been privileged to be at the center of its emergence and to have had some influence over how it has developed, for example with respect to getting us the attention of the broader American public and helping us get access to the press, where it is very important to counter evangelicals’ self-representation, which previously went largely unchallenged in major media outlets. The term “Exvangelical” comes from Blake Chastain’s podcast of the same name. It is also the name of a Facebook support group that was initially created as a discussion space for those who pledged at least $1 a month via Patreon to support the podcast. The group is now freely available to ex-evangelicals who agree to adhere to the guidelines (it is run as a safe space centering marginalized people and adhering as much as possible to the values of intersectional feminism). And it has over 4200 members.

I initially became one of the most visible exvangelicals as the community was emerging, around the time of the 2016 election, because my unique and uniquely weird combination of intellectual expertise and lived experience allowed me to comment on the Christian Right, contemporary Russia, and the affinities and connections between the two. All of that has been important to understanding Trump and Trumpism, and the major media outlets have also finally come around to recognizing that it’s white evangelicals, and not the white working class, that represent Trump’s primary base. My ability to speak to all of these topics helped me to get more freelance work and to get attention to my Twitter threads. I got Twitter verification in 2016, and I now have over 41,000 followers on Twitter. This has made me a key node in Exvangelical networks, and I work to promote the voices and perspectives of others from that background. I would like to give shout-outs specifically to Tori Douglass, Tabitha Wells, Cindy Wang Brandt, Akiko Ross, Kathryn Brightbill, Josiah Hesse, Nate Sparks, Emily Joy, Hannah Paasch, Asha Daya, Samantha Field, Charlotte Henderson, Chad Schobert, Amy Congdon, Emily Autenrieth, Jamie Lee Finch, Jessi Bennett, Linda Kay Klein, Daniel Hobbs, Jesse Reese, Bethany Sparkle, Kimberly Stover, Mandy Nicole, and Lindsey Naegeli for the important contributions they make to the Twitter and Facebook and offline communities. I could name many more, including some whose online identities are anonymous or first-name-only (some of these I have not mentioned simply for that reason). I’d also like to thank religious studies Professor Julie Ingersoll for her helpful involvement with our community, Liz Kineke for producing the CBS documentary on our movement, “Deconstructing My Religion,” and journalists and commentators like Paul Rosenberg, Nina Burleigh, Sarah Posner, Rebecca Klein, Bradley Onishi, and others who have written about us and who consider our perspectives necessary to include when writing about evangelicals. This community is very much not just about one or two people, and, though we are a mostly white group because evangelicalism is mostly white, so many of the critical voices in our community are women and POC. I’d like to see them get the credit they deserve.

(Note: This blog and video interview was done prior to Chrissy officially and publicly transitioning)