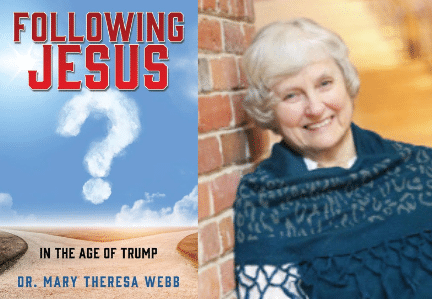 This week, I have the pleasure of blogging about my interview with Dr. Mary Theresa Webb about her book, Following Jesus in the Age of Trump. Her training at an evangelical seminary and her professional training in marriage and family counseling give her a very credible viewpoint that I believe all evangelicals should consider. As a Christian believer, she challenges evangelical Christians supporting Trump by reminding Christians what Jesus taught in the Sermon on the Mount, as well as, his parables, healings and other teachings. She is not alone.

Many evangelicals are starting to sound the alarm about the dangers of Trump because he is believed to have divine backing. There are Christians whose faith direct them to, first and foremost, do what Jesus said to do. When confronted with leaders who tell them to blindly follow, they stand with integrity and conscience. The mission of the movement, “Red Letter Christians” is: Staying true to the foundation of combining Jesus and justice, Red Letter Christians, mobilize individuals into a movement of believers who live out Jesus’ counter-cultural teachings. As a Red Letter Christian herself, she poses challenging questions and raises options for citizenship responsibilities that followers of Jesus must face in the age of Trump.

An editorial was published in Christianity Today that actually says that Trump should not only be impeached but should be removed from office. “That he should be removed, we believe, is not a matter of partisan loyalties but loyalty to the Creator of the Ten Commandments.” The editorial not only called out Trump. It called out all of Trump’s Christian supporters. “To the many evangelicals who continue to support Mr. Trump in spite of his blackened moral record, we might say this: Remember who you are and whom you serve,” Galli wrote. “Consider how your justification of Mr. Trump influences your witness to your Lord and Savior.” The Hill reported an increase in subscriptions for Christianity Today and offered a short clip with Mr. Galli.

There was quick a backlash by Trump supporters against the editorial. There are many prominent ministers, “prophets” and “apostles” of the New Apostolic Reformation that still believe that Trump is like a modern-day King Cyrus, a sinner but still doing God’s work. This article explains why Trump and some of his followers believe he is the chosen one.

In my book,  The Cult of Trump, I wrote about a number of very concerning Christian right groups who have been campaigning against a woman’s right to choose, gay rights, and pushing their version of religious freedom which seeks to discriminate and deny others their rights not to believe at all or to believe something completely different than them. They have been working for years on a project called Project Blitz on the state level. Please check out my blog with Frederick Clarkson and go to Blitzwatch.org to learn more and become more active.

I had written a previous blog about Christian Nationalism, Dominionism and the New Apostolic Reformation which featured an interview with Dr. André Gagné. Dr. Gagné is a former evangelical pastor turned critic and associate professor in the Department of Theological Studies at Concordia University in Montreal. In our interview, Gagné explains dominionism or political biblicism, “an idea where the Bible becomes in a sense, the manual of instruction on how to bring about social change and transformation.” Dr. Gagné has a Youtube channel that is excellent and, as a Bible scholar, is extremely well researched.

Another concern Dr. Gagné has is the political connections between Robert Drollinger of Capitol Ministries and the Trump administration. Vice President Mike Pence, along with quite a few Cabinet members and other politicians, do a  Bible “study” that Drollinger writes and even puts online each week. Yet, his teachings are often misleading or outright incorrect and out of touch with basic biblical scholarship standards, according to Dr. Gagné. (Read more at “Inside the White House Bible Study group.” Dr. Warren Throckmorton is a Christian evangelical with training in social psychology and is a supporter of my work on cults. Please see this blog and interview I did with him on Dominionism, Evangelicalism, and Government.)

As a cult expert who has helped people involved with cult groups of the three main Abrahamic faiths,  Judaism, Christianity, and Islam, I do my best to remind people that Abraham had a tent with four open sides which encouraged strangers to come for assistance to receive food, water, and help, as needed, without hesitation.  This teaches us a lesson that we should not fear strangers. This is completely contrary to the fear-based policies of the Trump administration.

I believe that people of real religious faith should keep the focus on love and helping “the least in the kingdom.” Christians, like Dr. Webb, need a louder platform to reach out to people’s consciences to encourage them to act righteously. Do not do unto others what you do not wish done to yourself!

Please watch our interview and share it, especially if you have friends or relatives who are Christian and supporters of Donald Trump. Be prepared to discuss with these folks what they think about what she says? Remember to ask questions in a spirit of love and curiosity. Don’t make statements or judgments. I am including the graphic of the Influence Continuum for readers to be oriented to ethical influence and call out unethical influence.

I believe there ARE such things as ethical and healthy religious groups. I am often asked about this from people who are devout atheists. I myself am a Jew and have been a member of a spiritual community for more than two decades. My position is freedom of religion demands freedom of mind. That means freedom to question, as well as, the freedom to disbelieve, too. That provides for healthy faith and practice. Of course, I do not believe that everyone has to believe as I do. I enjoy learning and fellowshipping with people from all perspectives and faith traditions that respect human rights. 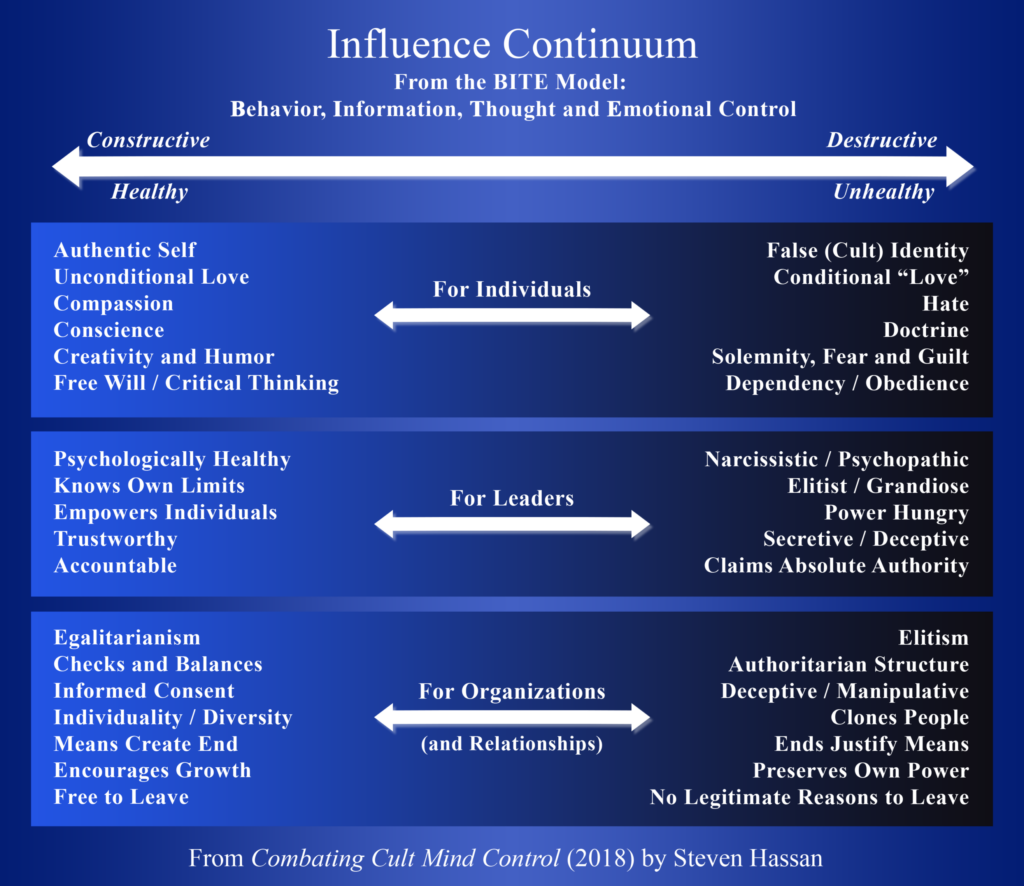 Steven HassanFollowing Jesus in the Age of Trump: A Discussion With Dr. Mary Theresa Webb01.02.2020