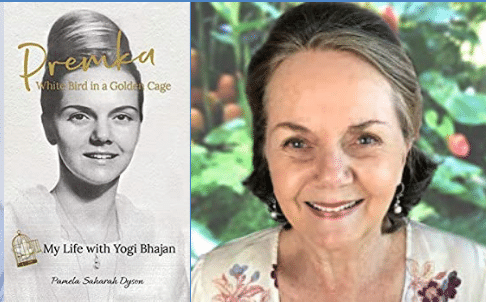 My guest this week is Pamela Saharah Dyson, a former top official of 3HO (known also as Western Sikhs)  and once a long term devoted follower of Yogi Bhajan. If you have ever heard of kundalini yoga, or even taken some classes, that was the main bait to recruit people. That and promises of health–even though Bhajan died at 75 from ill-health. Even though she left the cult in the 1980s, she has now published her story in a must-read book: Premka, White Bird in a Golden Cage: My Life with Yogi Bhajan.

If you have ever met or done business with a member of 3HO (Healthy, Happy, Holy Organization) you will identify them by their white turbans and white clothing. Although I understand that there are current people affiliated with the group who do not don the white garb. Even though Bhajan has died, the group continues with various business enterprises, like Yogi Tea, Akal Security and Kundalini Yoga as taught by Yogi Bhajan. Members still recruit followers, unfortunately, by advertising Kundalini Yoga sessions and other enterprises. They represent themselves as Sikhs, but most Indian Sikhs never accepted Bhajan’s group and avoid association with this group.

At the start, Bhajan had reportedly been a customs inspector at an Indian airport before coming to the West where he started as a yoga teacher. Like other cult leaders, he had no credentials to teach anything: yoga, Kundalini, nor was he a Sikh scholar. Harbhajan Singh Puri arrived in Canada in 1968 and soon settled in the LA area, calling himself Yogi Bhajan. He claimed to have a Masters degree in Economics. He also claimed to be a well known Yogi back in India, both of which were not true. Over the years, Yogi Bhajan evolved his “bio” and later told people that he was “The Mahan Tantric”, a title only possessed by one person on the planet at any given time and he claimed gave him a credential to teach White Tantric Yoga, which he totally made up. Perhaps his most outrageous claim, however, was that he was “The Siri Singh Sahib” the Religious and Administrative Authority of all Sikhs in the West! He died in New Mexico in 2004 at the age of seventy-five.

There have been many cases alleging criminal activities and reportedly several criminal convictions of 3HO individuals, as well as, complaints of severe sexual violence by Yogi Bhajan. Reportedly many 3HOers leaving the cult have been threatened with violence while trying to escape. There are unsolved murders of 3HOers still being investigated. In a long and well-researched article, “Master of Deceit: How Yogi Bhajan Used Kundalini Yoga for Money, Sex and Power” anti-cult researcher and writer, Be Scofield has done a great job documenting much about the criminal activities, drug smuggling, and sexual abuse cases.

Former members of this group say it indeed fits all of the BITE model criteria of a destructive mind control cult by evaluating it at the extreme destructive side of the Influence Continuum. I would like to state that in 1980 and 1981 I became aware that Yogi Bhajan himself was learning Neuro-Linguistic Programming (NLP) in order to understand how to use sophisticated hypnotic techniques to control people in his group. Over my 44 years of helping people involved with destructive cults, I can professionally validate the trauma and suffering of those who have been involved.

The group’s largest company, Akal Security, has reportedly earned billions in contracts relating to U.S. security. In this 2011 HuffPost blog, I wrote about this very unhealthy business deal.  There is a list of resource links on this page on this site. Its clients include the Department of Homeland Security, the Department of Justice, and the Department of Defense. In the past, the group was accused of profiteering off the slave labor of immigrants seeking asylum from corrupt governments and violent gangs. As their company, Akal Security has been tasked with enforcing ICE policies and has received over one billion dollars from Homeland Security. Apparently, the controlling board has issued a statement that Akal should not work for ICE going forward, but this has yet to be verified.

But sadly his lies, dangerous influence, deceit and use of sex, power, and money have hurt many. Former members allege sexual and psychological abuse by and under Yogi Bhajan. Additionally, there have been allegations of various criminal activities, and also Security Exchange Commission convictions of members of Yogi Bhajan’s inner circle. Several former students of Yogi Bhajan claim that when attempting to leave the group, they were threatened with violence. There is an unsolved murder of a member that is still under investigation, and also haunting suicides.

It is disturbing that this group has grown to be so mainstream, politically connected, and wealthy. Many may not be directly familiar with the Healthy, Happy, Holy organization but the truth is they have influence in today’s world.

In The Cult of Trump, I write about the different cult organizations that exercise influence over our political administration, as well as their followers. This is why it is so important to uncover and expose groups such as 3HO, Falun Dafa (Epoch Times), The Moonies, Scientology, New Apostolic Reformation, Opus Dei, the Family, and others.

Pamela Saharah Dyson’s book is making quite a major impact on all those once involved and currently involved with the group. More people feel empowered to come forward and share their stories about experiencing years of severe physical, sexual, verbal and emotional abuse.

One of the truly horrible things was Bhajan directed his American followers to send their young children (some as young as 5 years old) to boarding schools in India, where horrible child abuse took place. Miri Piri Academy was a boarding school in India run by the organization itself. Second generation cult members are now adults and many have never come to terms with the degree of abuse, which only started with the forced separation from their parents.

Please watch her interview (below) as she tells her story and, read her book. If you have been part of a destructive cult, you can regain your life and live authentically. Pamela’s story is one of inspiration.

Within months of his arrival in the United States, Pamela attended her first semi-private yoga class with Yogi Bhajan. He quickly swept her into service as his driver, photographer, personal attendant, and secretary. He was one of the many Eastern-born teachers who appeared in the U.S. in the midst of the transformational ’60s.

Over the course of the next 16 years, re-naming her Premka, Yogi Bhajan called upon her innate abilities, encouraging her to document the growth of their proliferating lifestyle community and the evolution of individuals from New Agers to yogis and finally to Sikhs. She became the Administrative Director for the International Headquarters of 3HO Foundation and Sikh Dharma International and the first Secretary-General for the international ministerial council of the Sikhs (Khalsa Council).

At Bhajan’s direction, Premka rendered some of the major prayers of the Sikhs into American English, in a book entitled Peace Lagoon, first published in 1971. She also served as Editor of the community’s 32-page quarterly magazine, entitled Beads of Truth. In 1979, she helped to conceptualize, compile and edit a full-color volume of more than 400 pages, presenting a history of Yogi Bhajan’s achievements in the U.S. The volume was a gift in honor of his 50th birthday and was entitled The Man Called the Siri Singh Sahib.

In 1984, she moved to Hawaii, married one of Bhajan’s former security guards and within two years, their son was born.

Pamela currently lives in upcountry Maui. She and her partner of the past 15 years raise chickens and honeybees plus freshwater fish and vegetables in an aquaponics greenhouse, enjoying the beautiful nature that surrounds them.

Pamela shares her experiences in her book, Premka: White Bird in a Golden Cage. It is a compelling and beautifully unfolding tale, offering a haunting look into a teacher/student relationship. This intimate memoir, written by one of Yogi Bhajan’s prized teachers and exalted students, is full of devotion, love, dedication, betrayal, loss and the healing unification of the self. It also reads as a love letter to a unique time in history—the ‘60s in Los Angeles and New Mexico, where love, music, art, spiritual exploration, often led to self-transformation. As a historical treatise and a spiritual mystery, this book offers unique insight into the origins of the Western Sikh movement and the proliferation of Yogi Bhajan’s kundalini yoga.