Former Member of MOVE Cult Speaks Out: An Interview with Kevin Price 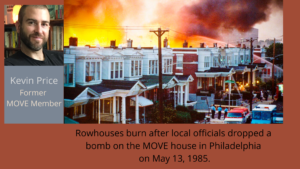 On May 13, 1985, a group of members of the MOVE cult, and their children, were living in a row house in West Philadelphia. MOVE was a “left” wing, revolutionary authoritarian group. Conflicts between MOVE members and the Philadelphia Police Department had been frequent, but that evening this conflict erupted into tragedy. The City of Philadelphia dropped a satchel bomb onto the roof of the residence which burst into flames and was allowed to burn without any attempt to put out the fire or rescue the inhabitants. Eleven people died in the fire, including five children. Sixty-one homes in the neighborhood were destroyed and hundreds of people were left homeless.

On May 13, 2021 a protest march in West Philadelphia paid tribute to the eleven people who died. In early July three former members of MOVE released statements calling MOVE a cult. Since then, other former members have stepped forward with the same message.

Prompted by the recent events, I was contacted by Kevin Price, a former member of MOVE. Price and I had spoken 14 years ago after he had read my book, Releasing the Bonds;, published in 2000. Kevin told me he found it so helpful in his efforts to understand his experience with MOVE. It also helped him recover from the effects of the experience. In 2012, especially because the Internet changed so many things, I created a shortened, updated version of the book, Freedom of Mind: Helping Loved Ones Leave Controlling People, Cult and Beliefs. (It is currently in paperback and e-book but will be available soon as an audiobook.)

Price first encountered MOVE at the age of 14 when he picked up a flyer at a punk rock show. He describes himself at that time as being a “left leaning, rebellious teenager,” and the worldview expressed in that flyer was intriguing to him. He ordered a book on MOVE, which turned out to be the official “movie version” of their history. This is a common tactic of cults in their attempts to recruit. A sanitized, PR version is presented as long as necessary to seduce someone into the cult. Only later (if ever) is the truth revealed, and then only as necessary to maintain power and control over members of the cult.

Essentially, Price says, the worldview of MOVE was a combination of Black radical politics with a Thoreau-like back to nature philosophy. The founder of MOVE, Vincent Leaphart, who changed his name to John Africa, was a Korean War veteran whose ideology was strongly anti-government, anti-corporation, and anti-technology. Price began to do support work that was directed toward nine MOVE members who had been imprisoned in the 1970s as a result of a confrontation with police.

At 16 years of age Price began an affair with a 22-year-old woman member of MOVE. She was closely involved with the inner leadership and pulled Price deeply into the workings of MOVE. Romantic involvements and flirtation, as well as sexual relationships, are another way that cults create tight bonds with prospective and current members.

Because of his involvement with this woman, Price soon found himself in way over his head. He was making frequent trips from Virginia to Pennsylvania and participated in private meetings with leading people in the group. He began to understand MOVE in a new light.

What Kind of Cult is MOVE?

In his initial contact with MOVE, Price understood it as a left-wing, revolutionary group, that he describes as a kind of “back to nature” Black Panther Party. MOVE members lived communally and promoted such practices as composting, homeschooling and a diet of raw foods. As he moved closer to the center of MOVE leadership, he began to see a religious belief system as the primary driver of the cult. In this context, the political structure of the group seemed to be more of a recruitment tool than the primary focus of the cult.

This religious belief system was based in the idea that all humanity’s problems began with a violation of “natural law.” Violation was the word used instead of “sin,” but it essentially reflects the Genesis interpretation of an original sin. The first violation, in the belief system of MOVE, was harnessing fire in order to cook food.

John Africa, the founder, was seen as a messiah figure. He had been put on earth to lead humanity back to a state of living in harmony with the natural world. He was a perfect person and everything he said was 100% true. Actual membership in MOVE was only through either being made a member by John Africa, or being born to a member. Price, and others like him, were considered close supporters, not members. However, if a close supporter married a member, then their children would be members. This idea pulled many supporters further into the group, by encouraging them to marry members. An emphasis on increasing numbers through bloodlines created an atmosphere in which girls were pressured into bearing children, even at the age of 12 in some cases.

Leaving the Cult and Helping Others Return to Reality

After about 10 years in the cult, Price says that he had a dramatic realization that he just couldn’t buy into the whole worldview any more. He had been working in his own business, doing manual labor alone, often for 60 to 70 hours a week. One of the things that had been nagging at him for a long time had been the fact that a former member had been killed in 2002. As Price was driving home one night exhausted from his work, it hit him like a lightning bolt—“they (meaning the cult) murdered him.”

By this time, Price had been married and he had brought his wife into MOVE. She wasn’t ready to leave and Price didn’t want to lose her in the process of leaving. He was forced to lead a double life while he carefully began to share his realization that they were engulfed in a dangerous, authoritarian cult.

For a while after leaving the cult, Price and his wife only talked privately with other ex-members providing support for them and sharing the experience. Eventually, though, they decided to go public. On June 30, 2021, they launched a website, coming out publicly, and three days later two other former members did the same. A podcast was recently released that investigates the death of John Gilbride, the event that was the catalyst in Price’s realization of the seriously dangerous nature of MOVE.

Price’s experience and his willingness to share publicly despite the dangers of doing so is a courageous but necessary act. Leaving a cult of any type is a difficult, lonely, and often dangerous process. Having an effective support system such as that provided by Price and his wife is critical, and I commend them both for speaking out and providing that support.