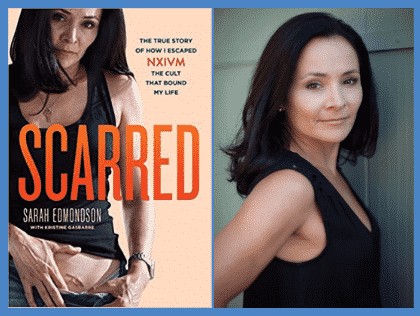 I am pleased to share a long-awaited interview with Sarah Edmondson–a former high-ranking member of NXIVM, founded by Keith Raniere. Sarah Edmondson is a Canadian actress who has starred in the CBS series Salvation and more than 12 films for the Hallmark Channel and Lifetime. She is featured in the CBC podcast Uncover: Escaping NXIVM and The Vow, the upcoming HBO documentary series on NXIVM.

She is the author of the book, Scarred: The True Story of How I Escaped NXIVM, the Cult that Bound My Life. Scarred is a memoir of Sarah’s recruitment into the NXIVM cult, founded by the now-convicted trafficker, Keith Raniere. It narrates in detail the 12 years she spent within the organization, during which she enrolled over 2,000 members, directly and indirectly, chronicling her breaking point and her harrowing fight to get out, help others, and heal.

NXIVM is an American company based near Albany, New York. It was led by Keith Raniere who earlier ran a multi-marketing company, Consumers Buyline, which was shut down by some 20 Attorneys General for being a pyramid scheme. Raniere paid a $40,000 fine and consented to a permanent ban from any chain distribution schemes. Evidently, this did not stop him from starting a kind of coaching MLM, and in 1998, NXIVM was founded purportedly as a personal and professional development company by offering “Executive Success Programs” and coaching. Within the group, Raniere created a secret society called “DOS” which promised women’s empowerment (DOS is an acronym for a Latin phrase for a master/slave relationship.) Another entity, “Jness” was a “women’s movement” that sold empowerment and claimed to be a curriculum to help male/female dynamics but in actuality it was covertly indoctrinating the members into believing that men were designed to be polyamorous and women were designed to be monogamous. Setting them up for the man they call Vanguard, Raniere. Sarah was initiated into DOS and branded with a cauterizing iron without anesthesia. She said it was more painful than childbirth.

Raniere claimed to be a genius (he was not) as well as a martial arts champion which he was not. Raniere reportedly studied other cults such as Scientology and learned Neuro-Linguistic Programming (NLP) from Nancy Salzman. A number of ex-members reported remembering absolutely nothing after spending hours alone with Raniere- a technique involving programming amnesia that I wrote about concerning a now-jailed former divorce attorney Michael Fine. Raniere understood hypnosis and NLP and used sophisticated mind control techniques on cult members, taking pages from the human-trafficking playbook. He preyed on members, especially women, using brainwashing and undue influence. During one trial, now deceased Dr. Paul R. Martin submitted an analysis of one of Keith Raniere’s groups, Executive Success Programs. He used Robert Jay Lifton’s eight criteria of thought reform and gave examples of what the group did to exert undue influence. This analysis would also apply to NXIVM. How does a group such as NXIVM start and why do people get involved and stay? I would like to invite people, especially former members to submit an analysis of the group using the BITE model which would be made available on the Freedom of Mind website. (Submit Group Information) We have done a color-coded version for the Mormons, Jehovah’s Witnesses, and Scientology so far.

Raniere’s federal trial began on May 7, 2019, and on June 19, 2019, he was convicted of racketeering and sex trafficking. The case is under appeal but I believe it is a precedent-setting case for future lawsuits against cult leaders. And Sarah Edmondson was a key witness in this federal case against NXIVM leader, Keith Raniere. She and others showed incredible courage by speaking out about NXIVM and the abuses they suffered by the leaders of the group.

During my interview with Sarah, she recounts her personal journey from 12-year-member to deciding to become a whistleblower. In our interview, Sarah discusses her book, the trial, along with her recruitment into, abuse during, escape from, and redemption.

The recurring important questions are how do intelligent, educated people fall victim to a cult leader? How did Raniere bamboozle the Bronfman sisters to give tens of millions of dollars? What were the dirty tricks used by Raniere to influence authorities to leave him alone for so long? How was the cult brought to justice? How can current members of a destructive group bring about public awareness to inside policies and abuses, once they become aware and have woken up to the realization they are in a cult. Lastly, how does one move on and heal?

For Sarah, she took control by having the brand surgically removed. Her story is so very helpful to those that have just left an authoritarian cult and are scared of what is next. Remember you are not alone. You will get stronger. Better. Led by attorney Neil Glazer, a number of former victims have filed a major civil suit against Raniere and the cult. In the fall of 2019, Discovery Channel aired a documentary on this cult.

The more you learn about cults and mind control, the more the parallels become obvious. And when you look at how others have healed, you realize a good life with meaningful relationships is possible.

Please take the time to watch the video interview below. Sarah’s story is one of bravery, strength, and redemption.

NXIVM Leader Keith Raniere Is on Trial for Allegedly Keeping Women as ‘Sex Slaves.’ Here Are the Major Players in the Case

Inside Nxivm, the ‘Sex Cult’ That Preached Empowerment

A Complete Guide to the NXIVM Trial