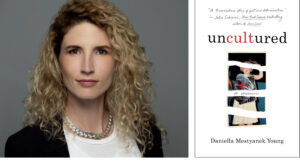 Have you heard the term “cult baby?” This refers to someone born or raised in a mind control religious human trafficking cult. Daniella Mestyanek Young is a third-generation survivor of the notorious sex cult Children of God (COG), later rebranded as “The Family of Love.” The cult group’s influence even extended so far that members had been invited to sing at the White House on two separate occasions. Over the past four decades, I have worked with many victims of this cult as well as read many books by former COG members. Uncultured is a very unique and remarkable book. It deserves its many rave reviews and I predict it will be even more successful by the survivalist memoir, Educated–which was a best-seller. This memoir tells a powerful story of how she overcame her background–to not only survive but thrive.

Now Daniella is an author, TEDx speaker, and consultant. Part of what makes her story so interesting is her escape from cult mind control and how her experiences impacted her as an intelligence officer for the US Army, particularly while serving in Afghanistan. She was one of the first women in US Army history to become a member of the Female Engagement Team participating in ground combat operations. She later received the Presidential Volunteer Service Award for her work to demonstrate the value of women soldiers.

Daniella lives with her veteran husband and daughter in Maryland. She is finishing her master’s degree in Organizational Change and Development from Harvard.

Daniella was born into the Children of God cult when her mother was raped at just 14 years old by another cult member. Her mother was also born into this destructive sex cult, run by David Berg, a pedophile who claimed to be a prophet of God. Berg said God wants people to have sex with anyone, even children, as young as 2 to 3 years old. He even turned women cult members into “Happy Hookers for Jesus” to recruit and make money.

Daniella said she never believed in the cult beliefs, and hated being raped, beaten, and abused. She ran away when she was 15 years old with no formal education. She managed to not only attend high school but became the class valedictorian. She was so bright, that she was encouraged to go to college. She learned could go into officer training and get her college paid for by joining the military. She was eager to serve her country and rose to become a captain in Army intelligence.

She had not yet understood cult mind control or received specialized counseling to overcome her upbringing when she entered the army. But there is no question in her mind that her cult training helped her succeed in the military. Not unexpectedly, she suffered a series of meltdowns because she was triggered by traumatic events in Afghanistan.

The Military Culture versus Authoritarian Cult

Daniella found that much of her early training helped her succeed in the military. She was good at following orders and had the discipline to perfect her skills. Her natural competitive streak fueled her perseverance, especially in contests with the men.

However, by utilizing my Influence Continuum of Authoritarian Control, it becomes more clear how the military differs from an authoritarian cult.

Deceptive recruitment denotes people’s informed consent regarding joining. Of course, children born into cults have no choice in this regard. There is rarely a salary and if there is, it is for leaders. Human trafficking is the best term to understand most abusive cults. There is no term limit to membership in a mind-control authoritarian cult. There is never a legitimate reason to leave. There’s typically no written code of ethics, judicial system, or checks and balances for a “Prophet of God.” Members are not allowed to read any critical information nor speak with former members about why they left. Members cannot criticize the leader, doctrine, or policy without punishment. One is programmed with a cult identity which must be obedient. This cult identity is a result of dissociation. One’s cult identity is taught to destroy or suppress their real identity. This is called egodystonic dissociation.

There is no doubt that boot camp training uses BITE Model of Authoritarian Control criteria to break recruits down in order to build up the soldier identity. Recruits are given a uniform, a number, a strict behavioral code of conduct, and strict adherence to orders by authority figures. This initial training is intentionally abusive to promote conforming behavior. However, unlike destructive cults, egosyntonic dissociation has taken place. The old identity is not viewed as evil. The new soldier’s identity still loves the Constitution, their country, family, religion, and values and enjoys the freedom to read critical information or speak with veterans. put to the side to be an effective soldier. It is imperative that a soldier have a strong identity and culture as it is required in combat situations to attack strangers and even kill them in war. When their service is up they can choose to leave honorably or sign up for another tour of duty. According to  Jason Kander, a previous interviewee, and author of  Invisible Storms, the military needs to do a much better job of preparing veterans for life back in society.

Yet, Daniella describes her experience as a woman in the military somewhat differently.

When you go into the military, as a woman, you’re going into a sexually violent atmosphere. You do not know what you signed up for. The justice system often doesn’t work for you. Plus, when I joined, we were slotted in as second-class citizens because of the combat ban for women. And this is all in an organization where people have trained to be violent. So, I feel like the experience of being a woman in the military has some toxic parallels on the influence continuum.”

She continues her explanation,

You’ve probably never thought about the parallels or the similarities between an international sex cult that traffics children and the United States Army. But then, once you see the comparisons, you’re invited to look at every group in your life differently. I sign my books asking people what cults they’re in just to get people thinking more. It’s not just a crazy story of my life. We’re all in groups, subjected to influence all the time. And we’re only likely to be able to see the toxicities if we’ve thought about it before.”

Daniella’s compelling story highlights many important points for everyone:

That Influence is everywhere and it is important to be able to identify it in order to protect oneself and others. The BITE Model of Authoritarian Control and Influence Continuum are useful tools.

That while we need to have a military and train people to kill and die for a higher cause, we must also consider people’s backgrounds as they might be primed, as Daniella was to suffer from triggers of sex abuse, corporal punishment, and trauma.

The military has to make new policies to end the existing rape culture to make it safe for women to serve alongside men.

Dissociation is not always unhealthy or bad. The new identity can still value the authentic self and yet be trained to kill or die.

The military needs to do a better job of helping veterans when they reenter civilian life so they can overcome PTSD and other issues that may have resulted from their service.

There are incredibly smart and talented people who have been born and raised by destructive cults. They need to be identified and require specialized counseling to help them learn what is healthy and normal and help them to thrive.

I invite all our readers to visit the Freedom of Mind Resource Center Cult Mind Control / Undue Influence webpage. This resource gives you lists of questions to ask before joining any group. Also, visit the Influence Continuum and BITE Model of Authoritarian Control webpages to find tools you can use to help assess an individual or group. These resources also outline and compare control tactics used to determine where they fall on a continuum from not harmful to extremely harmful.

The Freedom of Mind Approach to Helping Individuals Born in High-Demand Groups and Cults (1:20:19)