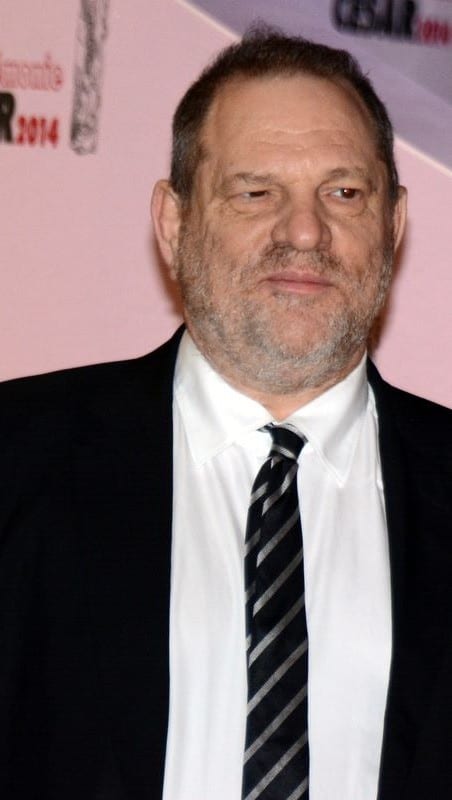 Harvey Weinstein in Paris at the César Awards ceremony 2014

I am heartened by all of the women coming forward, sharing the grizzly details of sexual assault against them by Harvey Weinstein. With hindsight, this unwelcomed harassment was happening for decades, and many were too afraid or paralyzed by fear to confront or report it. (One exception being ex-Children of God member, Rose McGowan.) This kind of abuse, by someone with power in a position of trust, is an example of the sort of work Freedom of Mind endeavors to expose. We need a culture change!

Promises of success and financial security or threats to “never work again in Hollywood” are examples of behavior modification methods explained by the BITE mind control model. As Leah Remini’s Emmy award-winning show on the reality of Scientology practices has demonstrated, good people can be unduly influenced to do bad things or conspire to harm the reputations of others because they are ordered to do so. Time after time, decade after decade, the poisonous CULTure persists. People within the orbit of the cultish authority figure stand by while they watch others, including friends and family, horrifically violated. They spread lies, rumors, plant false pieces of evidence, and justify what they do under the “ends justify the means.”

Predators do not have ethical boundaries that are respectful of universal human rights and should be held accountable for their actions. While decades late, accusations are finally pouring in against Harvey Weinstein as dozens of victims and others come forward. Hopefully, this will result in a culture change, not only in Hollywood but elsewhere. (#MeToo is trending with women worldwide sharing that they were victims of sexual assault.) With possible criminal and civil lawsuits coming, corporate board members will know that they must report criminal behavior or be liable to legal action as a co-conspirator.

The legal system needs to be changed to ensure justice for and protection of victims. As my regular readers know, towards this effort, I have established www.freedomfromundueinfluence.org. The concept of undue influence needs to be updated for the 21st century which incorporates scientific knowledge about social influence, neuroscience, and psychology. For one, there should be a federal abolishment of the statute of limitations concerning rape. New York State has passed this legislation. It is time to make it national. Not to mention the thousands of rape kits which sit unprocessed by law enforcement officials around the United States. This is a national embarrassment. Another issue that has come to our attention is that victims of mind control often complain they were made to sign non-disclosure contracts. This calls into question the legality of “knowingly” signing away legal rights. What is called into question is mental capacity and context of being given this forms to sign. Will it stand up to challenge that they really had done this with “informed consent?” This is a challenge that must be done. I have repeatedly encountered people who were indoctrinated to believe they were members of their “own free will” while choosing to give up their human rights. Really? Cults insulate the abuser from accountability by forcing members to sign non-disclosure agreements. Some of these contracts compel private arbitration and gag orders. Some state they can never say anything to anyone outside of the group or else face massive financial penalties. But this is wrong. Criminal acts should be reported to the police and whistleblowers should be protected.

But why was he, along with other successful men, excused from abusing women for decades? It was due to his power and wealth, which allowed him access to a vast network of people and resources making it easier to abuse women. He reportedly acted like a god and was treated like a god, doing whatever he wanted, whenever he wanted, to whomever he wanted. And he got away with it, or so it seemed until women began to come forward and report his abuse. Destructive cults exploit trusting, vulnerable underlings. And other powerful industry men have been accused of similar sexual assaults. Look at the ongoing accusations against Bill Cosby. Bill O’Reilly. Roger Ailes.

Michelle Goldberg’s Op-Ed in the NY Times, entitled, “Save the Phony Weinstein Outrage, Republicans” rings true. But what is currently happening is so vital for a national “tipping point” on the topic of sexual abuse and assault. We no longer can be passive observers, speaking out only with social media when allegations hit the news. Something has to change. Let us use our freedom of mind to immediately speak out, report and stand up to sexual abuse and harassment.