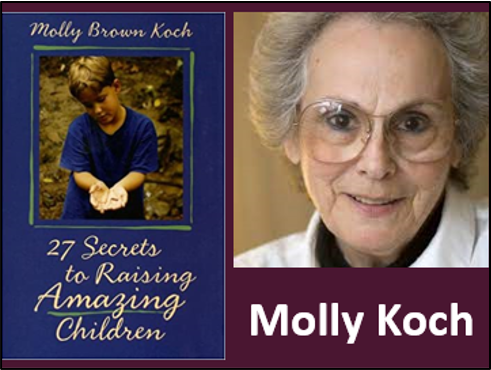 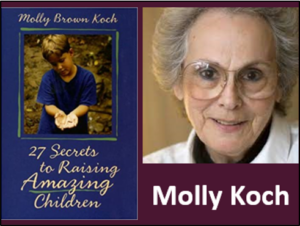 “Wouldn’t it be great if children came with a handbook?”

Healthy parenting requires a deep commitment of time, energy, emotional maturity, and insight. Most likely, every parent has wished for a handbook more than once! The birth or adoption of a child is only the first step in a long parenting journey. The skills needed to make that journey successful for both child and parent requires knowledge, conscious awareness, and emotional regulation.

Molly Koch, author of the award-winning book 27 Secrets to Raising Amazing Children, has been a treasured colleague and friend for over 40 years. Recently we sat down to discuss her lifelong work providing support and serving as a mentor to thousands of parents. Koch began her career as a parent educator in the early 1950s, leading groups in the Baltimore public school system’s Parent and Family Life Education Program. She continued this work well into her 80s, leading healthy parenting groups and training facilitators for her “Keep the Connection” workshops and writing a monthly column in Baltimore’s Child Magazine. Today, at 94, Koch is still committed to contributing to the health and welfare of families and is eager to share her wisdom and experience.

Koch believes, and I agree, that the goal of parenting is to nurture each child to allow them to become their best self and be true to their unique soul. However, an authoritarian “do as I say” approach to child-rearing is reminiscent of authoritarian cult indoctrination. The goal of destructive cults is to create an obedient, unquestioning follower. The authoritarian style of parenting serves to do much the same thing. Parents are the most important influencers in a child’s life. Influence can be assessed along a continuum, running from ethical and appropriate on the positive end to undue and authoritarian on the other.

During the 1970s, Koch also founded and led a support group for families affected by cults and provided education for the public on the dangers of cult recruitment and involvement. She also served as a resource on cults to the ATF and the Israeli government’s Ministry of Justice.

Active Listening is the Most Important Skill a Parent Can Have

There are four critical components of successful parenting:

All of these components depend on an ability to listen. Active listening is probably the most crucial skill for a parent, and it is actually critical for the success of all relationships.

When Koch began her workshops in the Baltimore schools, most of her parents had come from backgrounds in which children were expected to show respect by being obedient and not questioning the ways of their parents. The parents were low-income, and many were illiterate. Koch described her mindset in leading the healthy parenting groups as being a support person rather than a teacher who was there to tell them what to do. Although her approach was solid in its effectiveness, it sometimes got her in trouble with her supervisors, as the “pot of beans” story illustrates.

During one group, the women began talking about a pot of beans. That’s the way they fed their kids. They had a big wooden spoon and a big pot of beans. Whenever the kids were hungry, that’s what they ate. Someone told the director about the pot of beans, and he called me into his office, asking, “What the hell are you doing down there, Molly? You’re telling these people, it’s okay to eat from a big pot with one big spoon.” I asked him what he thought they should do, and he said, “They should be sitting around a table like everybody else and eating with forks and knives.” I said, “Wait a minute, Bill. When you supply the table, the chairs, the dishes, the spoons, the knives or forks, they can do it. Until then, they’re doing the best they can.”

Koch consistently employed her non-judgmental listening skills when leading groups. She always started with asking the parents what their hopes and dreams for their children were. She was not judgmental about how the parents lived and demonstrated a great understanding of the challenges faced by most of the families. She knew that just telling people about healthy parenting without any input from them about their lives would fail. But when people feel heard and accepted, they are amenable to change.

What is Active Listening?

Koch describes listening as her one true obsession, a skill that is often lacking in our modern society. Really listening to someone has an almost magical effect. What are some of the critical components of effective listening?

· Set yourself and your own story aside.
· Let the person speak and don’t interrupt.
· Don’t edit or correct what the person is saying – not even silently.
· Wait to formulate your response until the person has stopped talking.
· Omit distractions such as texting or answering the phone.

Koch advocates for parents to trust their own intuition and judgment about their individual children while also relying on experts in child development. Using one’s own wisdom as well as expert advice, it is possible to recognize which behaviors are normal stages children go through and what is a reflection of the individual child’s personality.

Koch says that children actually do come with a handbook. The child is its own handbook! Parents can learn to read the child and respond appropriately. Listening with your heart as much as with your ears will give each child a good chance to become their best self.