Heroic Imagination as a Positive Project for Human Rights 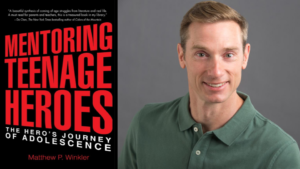 I recently had the pleasure of interviewing Matthew Winkler for my podcast, The Influence Continuum. Winkler is the Program Manager for the Heroic Imagination Project (HIP), which provides training for individuals and groups using groundbreaking scientific research and experiential training workshops. He has taught and mentored teens and young adults in middle schools, high schools, and colleges in New York, New England, China, and Japan. He produced a TED-Ed video, “What Makes a Hero,” that went viral and became the foundation of his book, Mentoring Teenage Heroes: The Hero’s Journey of Adolescence.

Dr. Zimbardo has generously supported my work since the 1970s. When he was President of the American Psychological Association (APA) in 2002, he asked me to organize a panel called “Cults of Hatred.” Later, Dr. Zimbardo went on to teach a course for 15 years at Stanford,” The Psychology of Mind Control”. Two chapters of my 1988 book, Combating Cult Mind Control, was part of the required reading for the course. He has been a mentor and a friend for decades.

Building a Culture of Heroism Inoculates Against Undue Influence and Authoritarianism

The Heroic Imagination Project (HIP) was founded 11 years ago by Dr. Zimbardo, designed to be a catalyst for positive transformation. HIP’s mission is rooted in the findings of the social-psychological experiments of Asch, Milgram, and Zimbardo, among many others. Throughout history, these experiments and numerous heinous acts reveal the “banal” side of evil, as described by Hannah Arendt. No one is exempt from the possibility of being coerced by the dark side of human nature.

However, the reverse also appears true. The “banality of heroism,” an idea first explored in a 2006 article written by Dr. Zimbardo and Dr. Zeno Franco, is a guide for HIP’s work, suggesting that every seemingly ordinary person on this planet is capable of committing heroic acts.

From this core belief, the Heroic Imagination Project was born with a mission to use essential findings in psychology to equip ordinary people of all ages with the knowledge, skills, and strategies necessary to choose wise and practical acts of heroism during challenging moments in their lives.

Creating a more positive and kinder social environment does not just depend on acts of actual heroism. Heroism, in its true sense, requires some risk or sacrifice. But increasing people’s ability to treat others as worthy of kindness and compassion is the way to create a better world.

Winkler describes the mission of HIP as “building heroes” by training people to have their eyes open, become more aware of the influences that determine how they act, and practice performing in positive and pro-social ways. Then when a situation occurs where true heroism is needed, it will be more likely that person will be able to respond appropriately. He gives the example of learning CPR. Obtaining that knowledge is not a heroic act, but it is when used in a life-and-death situation.

In the recent tragic events in Ukraine, there have been many examples of ordinary people stepping forward to fight against the invasion of Russian forces commanded by its authoritarian leader, Vladimir Putin. Not all of these acts were specifically heroic, although many were. But they were all examples of ordinary people stepping forward to challenge an authoritarian leader. In protesting or volunteering to help in many ways, these ordinary men and women demonstrated the value of heroic thinking.

In Ukraine, an 80-year-old man showed up at a recruiting station with a small bag containing a toothbrush, some underwear, and a few sandwiches, saying he wanted to fight for his grandchildren. A growing corps of civilian volunteers are mounting a spirited defense of the capital city. Ukraine’s president, Volodymyr Zelenskyy, also has demonstrated courage, integrity and leadership. Zelenskyy, who previously stood up to pressure from Donald Trump to illegally interfere with US elections, refused to leave Ukraine for personal safety, saying, “I don’t need a ride, I need ammunition.” In Russia itself, thousands of protestors risked police action and worse to demonstrate against Putin’s invasion of Ukraine.

In this age of polarization and lack of civil discourse, teaching and supporting the development of compassion and an ability to act with concern for others is a critical need. The principles taught through HIP’s curricula apply to educational institutions, corporations, NGOs, and social improvement projects worldwide.

While these principles can improve social interactions in situations involving adults, teaching them during the formative years would be much more effective. HIP has three central curriculum models directed primarily toward the K-12 population.

HIP also has an online six-week module curriculum that can be done independently and is self-paced. After taking this course, an individual is prepared to share and explain the concepts of heroic thinking. There are also YouTube videos on the work of HIP.

HIP is a non-profit, non-partisan organization that is doing essential work. As already mentioned, training and support provided by HIP are especially needed at all levels of education throughout the world. HIP partners with individuals and organizations in many countries so that these individuals or groups can provide the training in ways that are specific to their language and culture. Financial support from individuals and philanthropic organizations is badly needed. In addition, a groundswell of interest in having their programs brought into all schools would be fantastic.

Educated citizens willing to make the shared good a top priority will help ensure the survival of democratic governments and free societies. We need to start when children are young and help them be “heroes in training.” Then they will be able to do the right thing rather than serve a particular political party or ideology. They will grow up to be the heroes who will create a kinder, gentler world.

What Makes a Hero?

Steven Hassan interviewed Dr. Zimbardo in 1993 about his life work and mind control