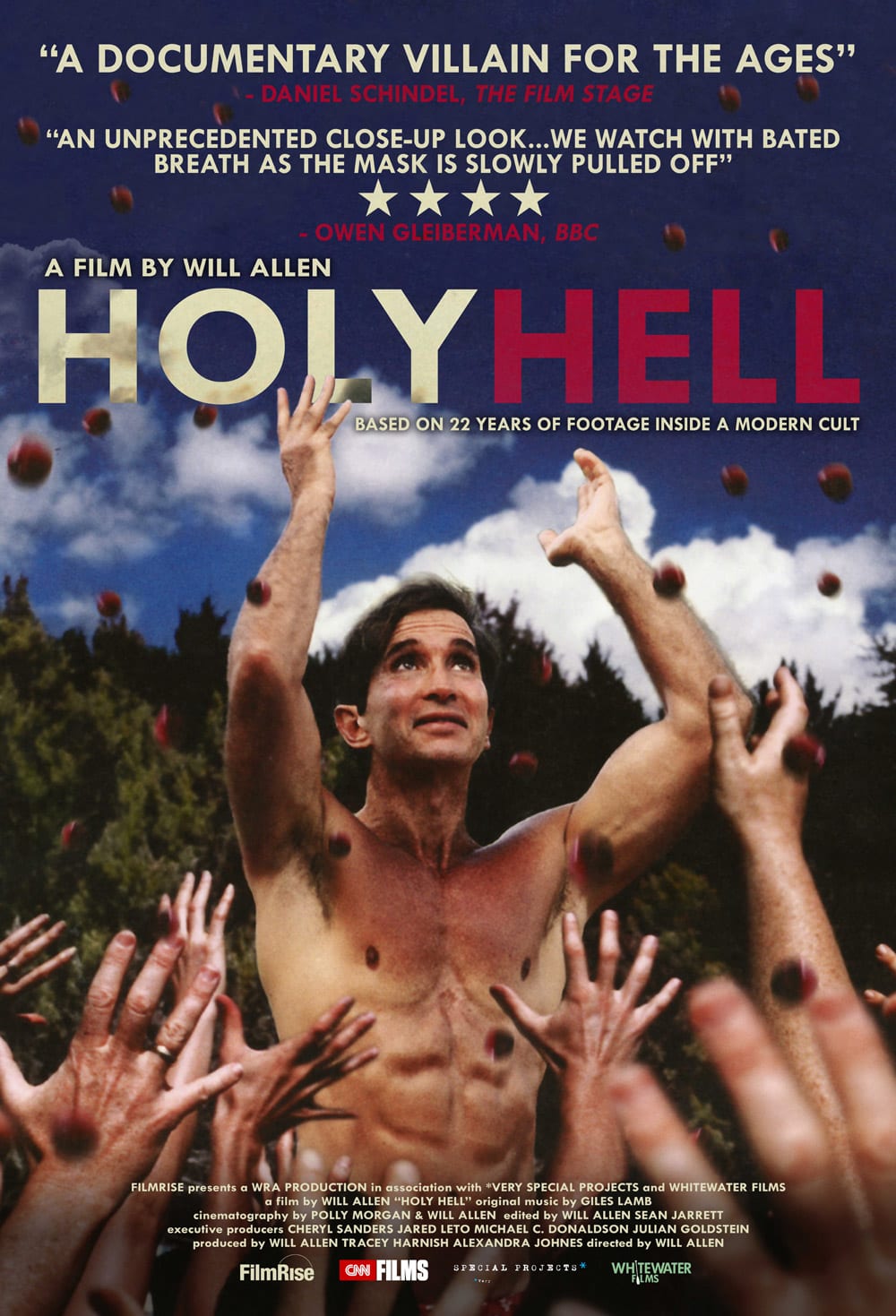 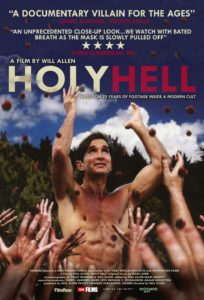 Imagine spending over twenty-two years of your life believing you are one of the select few who knows the secrets of the universe– only to discover the world that you live in is really a brainwashing cult. This is the story behind Holy Hell. Will Allen, the filmmaker who made this documentary from 20 years of recording cult activities, woke up and decided to expose his former guru.

How did this happen? Jaime Gomez is the real name of founder and leader of Buddhafield. He started as a wannabe Hollywood actor and small-time gay porn star. After his acting career failed, he appears to have studied other cult leaders and written himself the acting role of “Michel” enlightened master (with a subplot that he is a gay sex-addict predator). Based solely on watching this documentary, my guess for despicable role models that he used were: Bhagwan Sri Rajneesh, John-Roger Hinkins, and perhaps also Adi Da (Franklin Jones) and Muktananda. Like the leader of Buddhafield, Hinkins, of MSIA, was accused of having sex with gay and straight male followers. How do I know? I am just surmising. In truth, I have not talked or worked with anyone from Buddhafield. But the hypnotic linguistic, facial, and behavioral patterns used to control members look stolen to me. Over the decades I have worked with former members who once followed the above-mentioned gurus and studied them. The similarities between the groups and the sexual abuse are very noticeable.

When I watched this documentary I was reminded of several documentaries about Rajneesh including Fear is the Master. Rajneesh was the “disco sex guru” from Pune India, who moved to the U. S., and set up an ashram in Antelope, Oregon in the 1980s. He famously had 92 Rolls-Royces there. His followers were convicted of putting salmonella poisoning in salad bars as a way to influence the local election. Like Holy Hell, footage from Fear is the Master was shot by a disciple of Rajneesh who had gotten permission to film life in the ashram. He too grew disillusioned and wanted to leave. My recollection is that they held him against his will to attempt to coerce him to giving up the film. But, he refused and he got the footage to safety. It is a classic: a must see documentary. While watching, listen to Rajneesh’s hypnotic voice, see him rubbing his male and female disciple’s “third eye” with his third finger, and watch them apparently experiencing an orgasm. Holy Hell records the very same technique.

My last blog was about a divorce lawyer using hypnosis to rape his female clients and giving them suggestions for amnesia to the abuse. This lawyer, Michael W. Fine, got busted and now has a 12 year jail time plea deal. The sentencing is November 7th. In this group, hypnotic techniques were also abused. Members would agree to pay for hypnotherapy sessions called “cleansings,” which were used to control them. We will see if any former members decide to pursue legal action against their former cult figure.

In the beginning, the Buddhafield movement in California seemed like the answer to all the questions about the complexities of life. The group’s charismatic leader, who called himself “Michel,” (more “salable” for a guru than Jaime) on the surface promoted a lifestyle that focused on total well-being and community. Members devoted their lives after just a short period of time, giving up their families and careers. In addition to moving into cult housing, they attended weekly meetings, private hypnotherapy sessions, and huge retreats hoping to develop what they were led to believe was a personal connection with God.

Like the others, Allen believed he had found “the truth.” The privilege of being Michel’s full-time companion eventually turned into a nightmare. On a trip to Hawaii, Allen was sexually abused by Michel. This abuse continued for over four years. Every Thursday evening, Allen was forced to endure being raped by his master. Under Michel’s influence, Allen was instructed to believe the abuse was a privilege being bestowed upon him. He was programmed to keep it a secret from everyone else in the group and made to believe that any resistance he had to the abuse was a problem within himself.

As the movement grew, Michel became more and more drunk on his power. The once free-spirited leader was becoming paranoid and angry when people started accusing him of running a cult. Fearing interference from the outside, Michel changed his own name and relocated the group to Austin, Texas. After this move, things only got stranger.Followers were being instructed on how to lie to the outside world and forced to participate in odd rituals. Members were forbidden from disclosing their whereabouts to family and cut off from all outside media. Their only duty was to follow the commands of the master and participate in anything he ordered them to do.

Decades later, doubts finally began to surface among long-time members of the group and dissatisfaction grew. Followers began leaving. The exodus was met with hostility from those inside and former followers were demonized by Michel. Soon enough, the community was falling apart. After a mass email revealed that Allen was not the only one being sexually abused, more members began to share the secrets they were keeping. Those still living in the community began to realize that Michel was indeed not what he seemed to be. He was a liar and a manipulator. Many on the inside woke up to reality. They were not enlightened. They were in a cult. It soon came out that their “master” was a charlatan. They found out the real name of their master was Jamie Gomez and that he was nothing more than a narcissistic former porn star who took advantage of them and destroyed their potentials for healthy productive lives.

The story told in Holy Hell, while heartbreaking, is a prime example of how cults operate. During my work as a therapist and counselor, I have seen the way that these types of new-age cults can destroy lives. Leaders of these groups have taken open-minded citizens and used them as slaves and sexual playthings.

Based on my personal experiences and research, I have developed the BITE Model which explains the four types of control a cult exhibits of their followers. These four controls are:
-Behavior Control
-Information Control
-Thought Control
-Emotional Control

The Buddhafield leader, Michel, exerted control over his followers meeting all four of these criteria. They were unduly influenced by him and once he had them under his power, they were no longer able to think for themselves.

Unfortunately for this story, the Buddhafield cult still operates. Relocated to Hawaii, Gomez continues to manipulate new and old followers under his new moniker Reyji (God-King). Though he reportedly often travels in disguise it appears his influence has reached many in the area who are involved in yoga and other new age pursuits. This documentary seeks to provide not only closure for those who helped make it, but also serves as a warning for those who may be exposed to the group.

After watching, I was very disturbed at the ending as it did not seem to me that the former members had done their recovery “homework” by making the effort to really learn about unethical hypnosis and mind control. I was left to wonder if ex-members are still allowing cult-programmed phobias against cult experts to keep them from getting the help they might need to truly heal from the years of mind control abuse.

I encourage anyone interested in how cults work to watch this documentary, but TRIGGER WARNING for former cult members. I recommend not watching this late at night or alone. Please, keep your finger on the pause button and turn off if you need a rest or just stop watching if it gets overwhelming. It’s a good idea to watch with a friend or family member you trust. Not only will they be able to support you, but this documentary provides a good window for discussing and educating others. Of course, other groups and experiences may be quite different than your own. But the BITE model seems to be the universal.

Released just this year, and newly made available on Netflix, Amazon, and iTunes, Holy Hell offers an inside look at the power of undue influence and a prime example of mind control. By understanding the signs of undue influence and educating yourself, you may be able to avoid falling into a situation like Allen’s or help a family member who has been robbed of their freedom of mind.