Hubbard, Trump, and Narcissism: A Discussion with Jon Atack 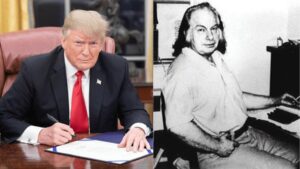 This week, my good friend and former member of Scientology Jon Atack joins me for an in-depth discussion. Jon is an undue influence expert, an author, researcher, and co-creator of the Open Minds Foundation. We discuss narcissistic traits we see between President Donald Trump and pulp science fiction writer and creator of  Scientology, Ron Hubbard.

Previously, I have written a number of blogs about Donald Trump. Jon has been featured in my blogs and Youtube channel (see the end for list). Jon and I have noticed a disturbing number of former members, Ex-Scientologists, as well as former cult members of other groups who are Trump supporters. It is an interesting phenomenon to observe former members of authoritarian groups wishing to follow someone who exudes many of the traits of their former cult leader. We both feel that unless ex-members really do their homework and process with doing in-depth research on destructive cults and their leaders, they can be susceptible to familiar patterns of grandiosity, pathological lying, and manipulation.

Jon and I have spent a good deal of time researching narcissism because of our interest in different cult leaders such as Hubbard, Sun Myung Moon, Rajneesh, Manson, Koresh, Asahara, and others. For a general audience definition, Psychology Today describes Narcissistic Personality Disorder as:

The hallmarks of Narcissistic Personality Disorder (NPD) are grandiosity, a lack of empathy for other people, and a need for admiration. People with this condition are frequently described as arrogant, self-centered, manipulative, and demanding. They may also have grandiose fantasies and may be convinced that they deserve special treatment. These characteristics typically begin in early adulthood and must be consistently evident in multiple contexts, such as at work and in relationships.

Individuals with Narcissistic Personality Disorder, according to the American Psychiatric Association’s diagnostic manual, the DSM-5, exhibit five or more of the following, which are present by early adulthood and across contexts:

Similarities Between Trump and Hubbard

Hubbard demonstrated this first criterion from the DSM-5, grandiosity and exaggerated achievements and talents. He claimed to be a nuclear physicist. He believed he was the best person, designated to clear the planet and save humanity. His big claim was in regards to human history where he recorded 60 trillion years in two weeks. He taught he was the source of Scientology and the Universe!

Has Trump made similar grandiose and exaggerated claims? For one thing, Trump believes everyone will be happy with what he has done; he is a “very stable genius.” And does not take criticism well, going after them as a person, calling such ones “despicable.”

Cult leaders like Hubbard and Trump believe in “never defend, always attack.” They are bullies and they want to scare people to submit to doing what they want. Trump wrote about taking revenge as one of the most important things he enjoys doing with someone he perceives has wronged him. Hubbard was known to be quite vindictive and in our interview, Jon describes this in great detail. And we have seen this same kind of behavior from the White House.

As for the second criterion, “preoccupation with fantasies of unlimited success, power, brilliance, beauty, or ideal love,” Hubbard claimed to have discovered a route to leave your body, go anywhere in the universe, making anything appear and disappear, in essence, becoming like a god.

Additionally, they both require excessive admiration. According to Jon, Hubbard’s first Scientology book, Dianetics, “is compared to the discovery of the wheel, the arch or fire.”

In the interview, Jon and I continue discussing the rest of the 9 criteria including has a sense of entitlement and unreasonable expectations, interpersonally exploitative, taking advantage of others to achieve his own ends, lacking empathy, unwilling to recognize or identify with feelings of needs of others, often envious of others or believes that others are envious of him, and arrogant behaviors or attitudes. Jon gives detailed examples of how these applied to Hubbard and we show how Trump fits them with his behaviors, too.

Lastly, Jon and I discuss this idea of the “cult of Trump” along with the claim that God is backing Trump. We both feel it is important to not blindly follow any leader. Evaluate the leader for honesty, integrity and congruency of what he or she says and what they do. Jon ends with some solid advice, “The thing is, to try and get over to people how to not be in any kind of cult. How to become autonomous in your own thinking.”

Interviews and Blogs with Jon Atack