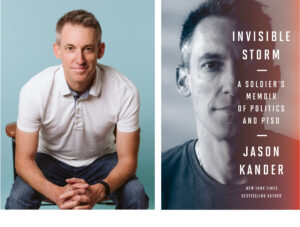 As Jason’s Invisible Storm raged internally, he says he missed out on fully experiencing a decade of his life. I am delighted to have had the opportunity to interview Jason about his experiences, his views, and this exceptional book.

The Military Is Not an Authoritarian Cult

The military is very different than being recruited into an authoritarian cult. You know what you’re getting into. There are standards. There’s a legal system. There are checks and balances. They’re not always working properly, but they are there. There’s a term limit. You get compensated, inadequate benefits perhaps, but you get a paycheck.

But the whole notion of what happens at boot camp training can be thought of as teaching people to adopt a soldier’s identity, language, clothing, and rituals but most importantly, you are taught to dissociate. You’re given a soldier identity capable of pulling the trigger on other people. You need to put your old identity to the side so you can be effective as a soldier. My view of this psychological process is best thought of as egosyntonic dissociation.

There’s never a legitimate reason to leave when you’re in a mind-control authoritarian cult. There’s never compensation. A code of ethics and a judicial system. Checks and balances are nonexistent. You’re stuck forever. Your cult identity can be thought of as egodystonic dissociation.

The extreme tactics of boot camp is a time-limited influence, and they know what they’re doing–breaking down a person’s identity, giving them a number, providing them with a uniform, etc. Yet, there is enough influence that it can be difficult for veterans to recognize their own PTSD symptoms.

Realizing he has suffered from PTSD

One of Jason’s key points is about comparing trauma. He admits he spent years thinking, “It can’t be PTSD because I have it on good authority that what I did was no big deal.” That’s when he gave it any thought at all. His Invisible Storm seemed disconnected from his experiences as an intelligence officer. He describes his experiences as, “To go into meetings where there’s a reasonable possibility that I could be walking into a trap, that I could be kidnapped or killed, and to go into these meetings with unsavory characters of questionable allegiances, to gather information and bring it back, I’ve got to feel like that’s no big deal or I can’t do the job.” It makes sense why the mind works like that.

So, vets often spend a lot of time suffering these symptoms because nobody ever disabused them of the notion that what they did was no big deal.

Jason describes how sometimes society looks at the fact that vets may hesitate to seek treatment and mistakes it for machismo. And sometimes it is. But oftentimes, it’s not that. Many times, veterans do not feel like getting help is a sign of weakness. Jason certainly never held that point of view.

Then, why hesitate? Jason describes thinking he simply didn’t earn a PTSD diagnosis. “I shouldn’t have to get that help because I was told that what I did was no big deal, and I believed it.”

So, he tries to get that message across to other vets. “What you did was a big deal, and you should get help.”

The other contributing issue Jason describes is the portrayal of PTSD on TV or in the movies. You’ve seen untreated PTSD scenes with criminal behavior, suicide, or other violence, with a theme that suggests that PTSD is a terminal diagnosis. But there are just not many portrayals of post-traumatic growth, even though it is experienced by many, many people. People can, and do, get better!

They have an unheard-of 85% success rate. Inspired by what he saw, on October 2nd, 2018, Jason was going to drop out of public life and go get help at the VA. He soon walked through the doors of the outreach center like thousands of other Kansas City vets.

Spoiler alert! One of the funniest parts of the book is when Jason started his therapy, but the doctor didn’t believe he had met Obama and assumed he was delusional. (No more spoilers, you’ll have to read the book or listen to the audiobook!)

Because of his positive experience, Jason joined Brian Meyer, the co-founder, and CEO of the Veterans Community Project, three years ago as the President of National Expansion. In his words, “It’s the best civilian job I’ve ever had.”

During this fascinating discussion for the podcast, Jason shared his views on:

Listen to the podcast to hear more about what Jason shares on these important topics.

His book is not so singular that it only applies to people in politics or the military. Trauma is all around us, and his journey is worth the read for anyone who has suffered trauma or lives with someone who has. I’d also recommend it to anyone who simply lives in our modern world.

Post-traumatic growth is real and worth pursuing, no matter the nature of your trauma.