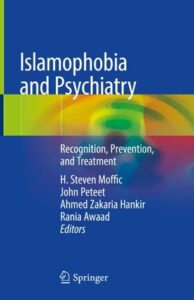 The book begins by covering the general and clinical challenges that are unique to Muslims, drawing from an internationally, ethnically, and intergenerationally diverse pool of experts.  The text covers not only how psychiatrists and other clinicians can intervene successfully with patients, but how we as clinicians can have a role in addressing other societally connected mental health challenges arising from Islamophobia. The text addresses three related but distinct areas of interest: Islamophobia as a destructive force, Islam as a religion that is threatened by stigma and misinformation, and the novel intersection of these forces with the field of psychiatry.

Islamophobia and Psychiatry is a vital resource for all clinicians and clinicians in training who may encounter patients struggling with these issues, including adult and child psychiatrists, psychologists, primary care physicians, counselors, social workers, and others.

Mine is the last chapter, Psychological Determinants and Social Influences of Violent Extremism, and I did it with one of the editors, Ahmed Zakaria Hankir, who was first author. (Pages 391-406)

I know but one freedom, and that is freedom of the mind. – Antoine de Saint–Exupéry

Terrorists seek to wreak havoc in society, whether they are the self-proclaimed Muslim marauders who rammed their vehicles into revellers on London Bridge and Borough in the United Kingdom or the far-right fanatic who shot and killed Muslim worshippers in a mosque in Quebec in Canada. But what do we know about the conflicting and terrorizing forces that often operate in the minds of those who perpetrate heinous and horrific atrocities such as these? What are the psychological determinants and social influences that could drive people to carry out such abhorrent and abominable activities?

This chapter aims to answer these questions and to provide mental health practitioners with a map to help them navigate through the precarious territory of the minds of those who perpetrate terrorism. In Section 1, we will discuss, describe and delve into some of the major psychological determinants and social influences of violent extremism. In Section 2 we offer insights into the pernicious phenomena of undue influence, brainwashing and mind control and the roles that each potentially plays in the cognition, character and conduct of members of destructive cult organizations. We conclude with clinical considerations for mental health practitioners as well as suggestions for how to stymie the proliferation of dangerous mind control cults of all kinds.

How This Important Book Came To Be

My sincere apology for our video interview which did not capture accurately the full story. This has the gist of the evolution. Rao Gogineni is the psychiatrist behind the scenes who inspired all the interfaith Symposia like this one, including one of forgiveness. This textbook, ‘Islamophobia and Psychiatry: Recognition, Prevention and Treatment’ was inspired by a Symposium given at the annual meeting of the American Psychiatric Association in May 2017. Led by Roomana Sheikh, M.D., “Islamophobia: Social, Religious and Clinical Perspectives” was well attended, and stimulated considerable discussion.
Following this session, Dr. Moffic was contacted by Nadina Persaud – Editor of Clinical Medicine at Springer – about the possibility of an edited book on the topic. Dr. Moffic, in addition to editing other psychiatric books, had focused on cultural psychiatry over his 45-year career, including establishing the first model curriculum on this subject for psychiatric residents in training. Following that, another of the symposium’s participants, John Peteet, M.D., who has had a major interest in the importance of religion and spirituality in the practice of psychiatry showed interest, and both then decided to test the feasibility of the project through collegial contacts. Fortunately, not only did there seem to be enough potential chapter authors, but serendipity and contacts soon led to two other well-known psychiatrists, co-editors Ahmed Zakaria Hankir, M.D., and Rania Awaad, M.D., each a major spokesperson on Islamophobia and Psychiatry in their respective countries, Great Britain and the United States. That left us with four co-editors – spearheaded by Dr. Moffic – representing a spectrum of age, experience, religion, gender, and countries of professional work, united in a passionate concern for the psychological and societal harm of Islamophobia.

How My Involvement Came About to Contribute

Since 1999, Dr. John Peteet and Dr. Mary McCarthy have had me come to be a presenter in their course Spirituality, Religion, and Society in the Harvard Longwood Psychiatry Residency Training Program. It is a primer of Dissociative Disorder 300.15 and my work with destructive cults of all types. I have presented the Harvard Longwood Psychiatry Grand Rounds two times and Psychiatry Grand Rounds at Boston University Medical Center, as well. Another way of saying this is: if we well-minded, psychologically sophisticated, and compassionate co-editors and chapter writers of very different cultural backgrounds can’t get this task of how to address Islamophobia (and potentially Anti-Semitism) right, then the likelihood of successfully negotiating this challenge in our field, our societies, and the world is about nil.

An additional resource, for former members but especially for mental health professionals, is a two-hour program I did for the famous psychiatrist, Dr. Judith Herman, author of Trauma and Recovery. In a very unusual case, a former client who had exited the International Church of Christ after being in leadership for many years, suffered (after leaving the group) for 11 years in the mental health system, being misdiagnosed and mistreated. When she heard I was teaching for Dr. Herman’s course, she begged us to let her come and speak. She passionately wanted to educate the mental health professionals and discussed her case with them. To protect her privacy, her face was blurred on the public video, but Laura gave permission to give access for training purposes to credentialed mental health professionals.