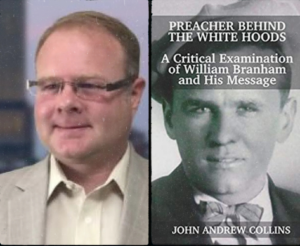 My friend and colleague, John Collins, has done significant work documenting the history of William Branham’s Message movement. A few years ago, Collins and I authored an article on Mind Control and Jonestown as Jim Jones had been influenced by Branham. Collins taught me about Branham and his influence with other authoritarian cult leaders. Cults can often share historical connections but try to mask and deny these connections to develop and maintain power, money and sometimes take advantage of vulnerable followers for sex, too.

Collins was born into the Branham Message cult. Ever since he escaped, he has worked tirelessly to understand its true history and development as well as freeing himself from the mental and emotional damage he suffered as a child growing up in that atmosphere. One of the tools Collins used in evaluating the Message was the BITE Model of Authoritarian Control and Influence Continuum.

Collins has written an important and excellent book about Branham, entitled Preacher Behind the White Hoods: A Critical Examination of William Branham and His Message. Yes, “White Hoods” refers to the Ku Klux Klan (KKK). Collins also has a website devoted to informing people about the Message cult, as well as, other destructive religious cults. His website serves as a place for ex-members to find information and support in their journey toward freedom of mind.

There are essentially two versions of the history of Branham and his Message churches. The version that has been promoted by supporters of Branham and his ideas essentially states that he began his ministry shortly after the end of World War II. During that time there was a resurgence of healing revival ministries and Branham was one of the most prominent leaders in that movement. Thousands of evangelists joined in and a number of charismatic movements (Word of Faith, New Apostolic Reformation and others) grew out of Branham’s ministry. I wrote about the New Apostolic Reformation groups having leaders who claim to be prophets or apostles who get direct revelations from God–including “God” wanted Trump to be President. There are millions of people in these authoritarian groups.

In reality, Branham had gone through many stages and took on several personas in his attempt to create a successful ministry. The movement that he claims to have started was actually created in 1915 by Roy E. Davis, a high-ranking member of the Ku Klux Klan. Davis came to Jeffersonville, Indiana, and took over an established church. What then occurred is a complex story, but eventually Davis was extradited to Arkansas on charges of grand theft auto and suspicion of murder. While he was gone, Branham took over his church, forming the Billie Branham Pentecostal Tabernacle in 1936.

Branham’s ministry was characterized by extreme white supremacist and deeply misogynist attitudes. Members of the Tabernacle and subsequent offshoots that fall under the Message rubric, made end times predictions, spoke in tongues, had rituals for casting out demons and used the concept of faith healing as a benchmark for religious devotion. A few engaged in polygamy, drinking poison, and handling snakes.

Branham himself was characterized as a “prophet” who channeled messages from God. He recorded approximately 1,500 sermons starting before 1947 and up until his death in 1965. These recorded sermons are used today as a means of keeping the Message alive, but they were used even before Branham’s death. Collins describes his grandfather’s role as pastor as the “best job on earth.” He didn’t have to prepare his own sermons; he simply pushed a button on the tape recorder, everyone sat and listened to the taped sermon and then went home. Many pastors in the Message sects gained significant wealth as a result of their position in the cult.

Some ministers within these sects did do their own sermons and this often caused problems because they would not necessarily be preaching the party line. Even the theology in the sermons recorded by Branham might conflict, as he recorded them in different stages of his ministry. For example, in one stage Branham said that the Trinity is demonic and anyone who joins a Trinity sect takes on the mark of the Beast. Other of his sermons advocate praying to the Trinity!

Growing Up in the Message Cult

Collins jokes that he was born into “cult royalty,” as his grandfather was pastor of the “Leaders Church” for almost 50 years. While said tongue in cheek, referring to himself in that way does highlight one of the common characteristics of all authoritarian cults. There are a few leaders at the top and everyone else is “rank and file.” The few people at the top are privy to all information and understand how the cult operates. The rank-and-file members are given only enough (often false or misleading) information to enable them to work to support the cult.

Growing up in this cult, Collins was indoctrinated into the racist and misogynist world view, as well as, being witness to physical abuse perpetrated on children in the name of raising them to be “saved.” Children were beaten with belts, and in worst cases, parents were encouraged to beat children with 2x4s or barrel staves — unclothed — until the flesh was mutilated. Even if a child was fortunate enough to evade such punishment, they would often hear the sounds of beating and cries of their peers. There is no question that being abused or being witness to the abuse of others creates long-lasting PTSD.

Women lived under very strict social guidelines. Women who wore pants were harlots. Branham believed that letting women vote would lead to the “destruction of the United States.” Education and working by women were strongly discouraged. Branham promoted a hierarchy in the animal kingdom, saying that human males were the highest, but women were even lower than hogs.

All authoritarian cults use mind control and undue influence tactics to recruit and control members. The Message cult is no exception.

At first, Branham claimed that everyone was welcome to attend his revival meetings, whatever their specific Christian identification might be. However, he believed that mainstream Christianity had become apostate and would eventually begin to preach that only his vision was true. This is much like the way all cults bring people in by at first welcoming them, but then beginning the indoctrination into cult thinking.

Collins is a now a talented musician but had never been exposed to the rich variety of music that exists in the “real” world. Until he left the cult, he had never heard rock and roll!  Although he might walk through a mall where music was playing over the sound system, Collins used “thought stopping” techniques so he actually didn’t “hear” the music.

Another tactic that is used by cults, which is particularly significant in religious cults, is use of one Biblical phrase outside the context of the original text. This is referred to as loading the language and is one of Robert Lifton’s eight criteria in effective mind control.

Leaving a cult is difficult and freeing the mind from the damage done takes significant effort. Fortunately, there are many resources available for support. Collins has recently partnered with Naomi Wright Ministries, a Christian ministry formed to provide help and support for anyone who has had or is currently undergoing an unhealthy religious experience.

Extensive Research into William Branham and his “Message” cult

The Message Part 27 – William Branham And The Kardashian Family

An Interview with John Collins on Branhamism and Abuse (Part Two)

Amazon.com: Preacher Behind the White Hoods: A Critical Examination of William Branham and His Message