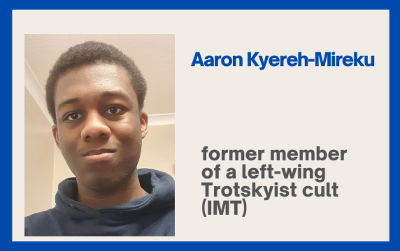 The story of Aaron Kyereh-Mireku, a former member of a left-wing Trotskyist cult (IMT), is very important for two reasons. His experience is more proof that anyone can be seduced into a cult, no matter how intelligent, educated or influence-resistant they may be. Further, his story demonstrates that there are cults with left-wing, communist ideology, as well as those based on a right-wing worldview.

Media attention has been overwhelmingly focused on authoritarian cults such as QAnon, Scientology or the Rod of Iron Ministries, an offshoot of the Unification Church, or Moonies (the cult I was recruited into and thankfully escaped). But it is important to know that extremist, political left-wing cults exist as well. Those who continue to support Donald Trump like to accuse me of being a communist, or of being in a left-wing cult, or of having been brainwashed. When Aaron reached out to me from the United Kingdom and told me my work helped him a lot and offered to do an interview I was excited to do so.

As Aaron shared his story, I felt as if I was looking (figuratively) in a mirror. He was the same age as I was when I was recruited by the Moonies. Like me, he was undergoing a significant life change (entering college) and both of us had recently experienced a difficult life event. Significant life changes and emotional events are well known to create a mental state highly receptive to cult recruitment.

Aaron is currently a graduate student at the University of Warwick in Coventry, United Kingdom, but he entered this college as an 18-year-old in 2017. Aaron describes himself at that time as “a passionate libertarian socialist, inspired as much by Nietzsche as by Marx.” He considered communist ideology to be based on a slave morality and hatred of the individual. Yet, he soon became a member of IMT, and “Trotskyist drone.”

Shortly before he entered college in 2017, Aaron had become increasingly skeptical of liberal capitalism and began to delve more deeply into Marxist ideology. He was particularly affected by his reading of Oscar Wilde’s The Soul of Man under Socialism. Aaron became convinced that he was a Marxist, although with a somewhat more libertarian and humanist tendency. Aaron found the website of the Trotskyist International Marxist Tendency (IMT) and was intrigued. In September 2017 he attended an IMT event in London that celebrated the 150th anniversary of Karl Marx’s book Capital: A Critique of Political Economy. After he got to university, he became involved in the local campus-based IMT group.

In October of 2017, Aaron attended an IMT annual event in London marking the anniversary of the October Revolution. This is a flagship event with speeches from leading members of IMT. Aaron was surrounded by committed believers, was pressured to purchase and read literature produced by the IMT, and was subjected to lengthy talks exhorting him to join IMT and “build the revolutionary party.” He felt special. For the first time he believed he was finally with people who shared his passionate desire to change the world. (Later, of course, Aaron would realize this “love bombing” is a common cult recruitment technique.)

Aaron began a routine of political education, branch meetings, newsletter sales, contact meetings and weekly events held on campus. Members of the IMT group were told they were “Bolsheviks” working toward a revolution in Britain that would be led by IMT. They called each other “comrade,” and were told they comprised a “cadre,” the officer corps of the revolutionary arm. Potential members were called “contacts,” and talks on Marxist theory were called “lead-offs.” Developing a special vocabulary is another common cult practice and is referred to as “loading the language,” one of Dr. Robert Jay Lifton’s eight criteria for cult mind control.

During the entire time he was a member of the IMT, Aaron admits he had doubts. But he tried very hard to convince himself that the ideological tenets of IMT were correct. He had publicly claimed to believe these ideas and didn’t want to be a hypocrite. But Aaron was unable to reconcile himself with one of the central narratives about Trotsky. The IMT party line is that Stalin took over and betrayed the Russian revolution. Stalin was able to do this, according to this narrative, because of conditions in Russia such as extreme poverty and isolation from the rest of the world. Trotsky supposedly had nothing to do with undermining the workers democracy or establishing a brutal dictatorship in the Soviet Union.

Aaron knew from his intensive research and reading that this narrative was completely false. He raised his concerns with leading members of the group. Their response was scathing. IMT leaders had said that comrades could bring their questions out in the open, but actually no questioning of their doctrine was allowed. Aaron was told if he didn’t correct his thinking, he would become a liberal, would betray Marxism, and his thinking was complete heresy. He was told not to share his doubts with anyone else in the group. Spreading doubt would be a serious breach of discipline and he would be expelled. During this time Aaron had also discovered critiques of Trotskyist groups from people such as Louis Proyect and Dennis Tourish. Aaron was now fully convinced that he was a member of a left-wing cult and made the decision to leave.

Analysis of IMT using the BITE Model of Authoritarian Control

I was pleased to learn that Aaron had been helped in his recovery by my work, including Combating Cult Mind Control.  Even though I was recruited into a right-wing cult and Aaron was recruited into a left-wing cult, the parallels between his experience and mine are striking. One of the tools that Aaron used to increase his understanding of IMT and how it operated was my BITE Model of Authoritarian Control. Aaron wrote a detailed analysis (see links below) of IMT based on the BITE model. The following list highlights the policies and procedures of IMT that make it a cult.

Both Aaron and I have found meaning in sharing our experiences and are grateful that we can help others find the courage to free themselves from cult indoctrination and navigate the emotional path to full recovery. #iGotOut is a movement of former members I encourage those former members interested in helping others get involved with when they post on social media. One of the most important freedoms that any human being can have is freedom of thought and the ability to make decisions free from undue authoritarian influence of any kind.