Light the Way to Freedom to End Human Trafficking: 2019 Summit in Austin, Texas 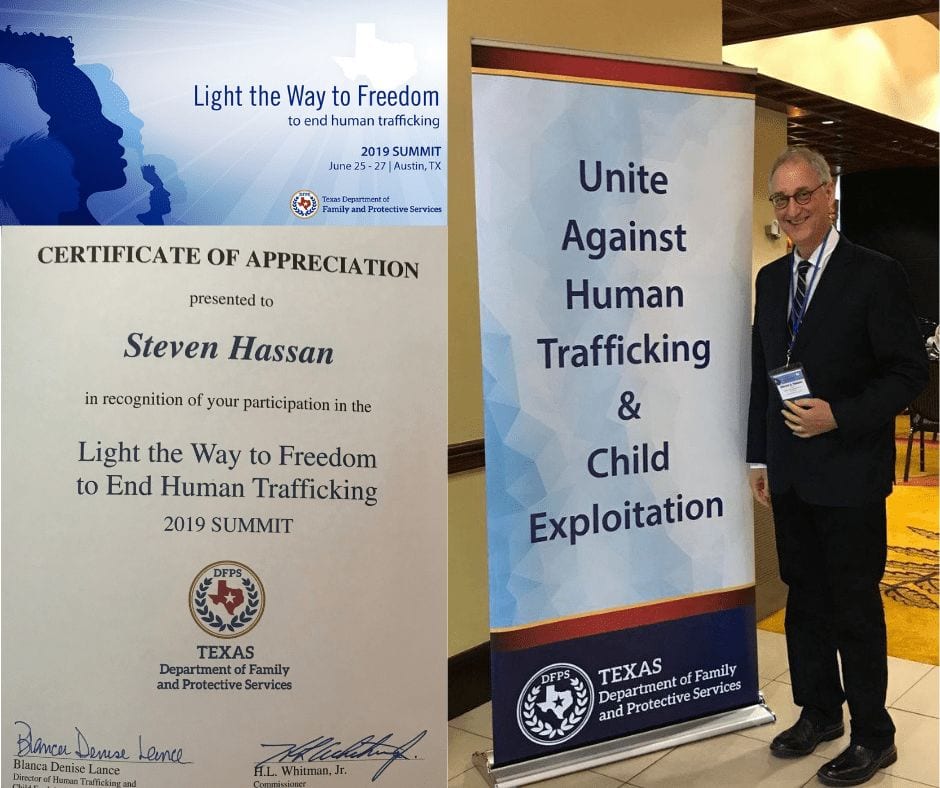 On June 25 – June 27, 2019, I had the honor of attending an amazing gathering of over 800 case investigators, law enforcement, judges, and therapists convened by the Governor and the Texas Department of Family and Protective Services. This was an invitation-only event, closed to the public. Trafficking experts presented and offered training workshops. Survivor advocate experts were among the most knowledgeable, effectively educating any involved with helping those in need.

I learned that the existing system in Texas (and indeed everywhere) does not take a systems-oriented approach, focused on helping those who are being victimized. Commissioner Whitman, former head of the Texas Rangers, is leaving as head but did a lot to vastly improve the system including initiating a yearly training and networking program. Certainly, those who are being trafficked are not criminals and should not be treated as such. The public judicial policy has to catch up to this common sense proposition. It is only recently that the system is recognizing that anyone under the age of 18 is automatically a minor and should not be treated as an adult and jailed. Trafficking survivors are advocating jailing the pimps, traffickers and the “johns” (purchasers) and not those who are being exploited.

It was a privilege to share my Influence Continuum and BITE model, as well as, my recommendations for helping people who have been programmed by pimps and traffickers. (For those who do not know about my past work on human trafficking, my website page is here and my YouTube playlist is here.) My sessions were filled with over 200 people each and had excellent questions and I heard very positive feedback. At the last minute, I showed a short video and discussed the recent trial of Keith Raniere, leader of NXIVM, who was convicted on all counts of racketeering and sex trafficking, as well as, other criminal behavior. It was super exciting to share this precedent-setting case that will have a direct bearing on future cases involving pimps and sex traffickers, I predict.

These are the descriptions of my two workshops:

Many people think of mind control as an ambiguous, mystical process that cannot be defined in concrete terms.  In reality, mind control refers to a specific set of methods and techniques, such as hypnosis or thought-stopping, that influence how a person thinks, feels, and acts. In this session, participants will learn how to identify and undo the effects of destructive mind control. Steven Hassan’s BITE Model explains the four overlapping components of control necessary to define undue influence: Behavior Control; Information Control; Thought Control; and Emotional Control. These four overlapping components are systematically used to break a person down and create a new “cult” identity with a new name, new loaded language system, and belief system to inoculate obedience and dependency. Participants will learn how to apply the Influence Continuum and assess ethical influence versus unethical influence. In addition, this session will adapt key concepts for the use and work with children who experience human trafficking.

Workshop 2: Strategies and Techniques for Recovery from Human Trafficking Programming

The way to recover from destructive mind control is to know yourself, befriend yourself, and learn how to control your own mind. Furthermore, it is essential to become a lay expert and have a toolbox of techniques and strategies for navigating life. DSM-5’s description of Dissociative Disorder that is caused by brainwashing. This is important as people need to know that this is a real phenomenon. I will then show slides of a number of different cult leaders and pimps. I will discuss my Influence Continuum and describe Traffickers and cult mind control parallels on the destructive end. I will ask the question: How would you know if you were under mind control? And if people attended my previous workshop, I will ask them to answer, “What are the best ways to constructively influence someone who is involved with a mind controller (pimp, trafficker) or cult? I will discuss triggers (all five senses) and how to teach people to be self-aware and how to undo triggers by re-associating reactions from cues. I will discuss how to undo the programmed identity by the pimp/trafficker. I will discuss Maslow’s hierarchy of needs and how Ending the Game orients to helping people understand their basic needs including creating a structure. Belongingness, meaning, and self-development. I will show the short Ending the Game (ETG) video with trafficking survivor and co-creator of ETG, Rachel Thomas. I will briefly go over the ten lessons covered in the course. Being a resourceful survivor includes having a positive vision of themselves in the future and a step by step set of tools for how to achieve it. Visualization, Positive reinforcement, identifying resistance to change, which includes programmed beliefs from the trafficker. Positive self-talk, deep breathing, self-massage, being in one’s body, learning to trust your own self and develop an internal “locus of control.”

I will cover the difference between Associated memories (being in the experience again) and Dissociated memories (seeing the younger you in a tv screen.) All positive memories should be by default associated and all trauma, abuse must be dissociated from the present moment. I will discuss how to take the resources of the present and plug them into your memory of the past, by answering the question, “If I knew then what I know now, I would do this and this differently” and actually imagine it associated. Utilizing example of role models of people who have successfully navigated their lives and are doing meaningful work, have good friendships and connections, and healthy self-esteem demonstrates that there is life after cult.