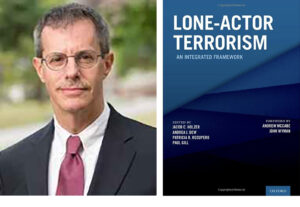 Public attention to the phenomenon of lone-actor terrorism has seemed to rise in recent decades. Tragic shootings in just the last two months have brought this phenomenon into even sharper relief: a school shooting in Uvalde, which prompted outrage over law enforcement and U.S. gun control policies; the July 4th Highland Park shooting in Chicago, which again led to an interrogation of the internet’s role in motivating lone-actor terrorists; and, most recently, the assassination of former Japanese Prime Minister Shinzo Abe, which brought to light how the Unification Church’s predatory financial tactics factored into the shooter’s motivations. We also know mass shootings occur on a larger scale than just those involving high-profile, lone-actor terrorist cases; in fact, over 300 have occurred in the U.S. in 2022 alone.

After these tragic events, popular explanations for the motivations of these lone actors often fixate on a set of causes that can be narrow, simplistic, and even harmful. Moreover, these discussions often employ definitions of “terrorism” that are flawed or incomplete; for example, some definitions of political terrorism foreground the right wing but ignore the left. It is critical to get explanations and terms right because getting them right allows for better solutions: Policymakers can reform gun laws; communities can revamp school curricula; and individuals can be equipped to interact more sensitively with friends, family, and acquaintances.  In sum, we cannot decide how to effectively devote our resources to reducing lone-actor terrorism until we improve our understanding of lone-actor terrorism.

Dr. Holzer’s Contribution to the Challenge of Lone-Actor Terrorism

In a recent episode of my podcast The Influence Continuum, I interviewed Dr. Jacob Holzer to discuss this issue. Dr. Holzer is an award-winning and board-certified forensic psychiatrist who continues to practice at McLean Hospital as well as serves as a professor at Harvard Medical School.  His extremely valuable text, Lone-Actor Terrorism: an Integrated Framework, provides us with the subtle and comprehensive perspectives necessary to guide us on this pressing topic of lone-actor terrorism.

As Dr. Holzer notes in his discussion with me, it is rare to find substantial academic work exploring the complex questions underneath the phenomenon of lone-actor terrorism. This fact makes his new book even more timely. For one, the text eschews simplistic arguments for a nuanced approach, making for a text that is exploratory, comprehensive, and cautious, rather than rushed, narrow, and overly certain. This approach can lead us to form productive responses to lone-actor terrorism rather than ineffective—or even harmful—ones.

Drawing on fields as diverse as linguistics and historical analysis, the text offers a versatile and multidisciplinary treatment of the phenomenon of the lone-actor terrorist. Some articles in the text suggest root causes for lone-actor terrorism, such as psychiatric aspects, mental illness, psychoactive agents, psychological development, the internet, social media, and emotions. Other articles explore how psychometrics can help us look for useful patterns across these factors; how linguistics can play a role in predicting lone-actor terrorism; and how possible solutions to reducing lone-actor terrorism, such as surveillance, are beset by tensions between civil liberties and public safety. (See the Oxford Medicine Online database for a full preview of chapter titles).

My chapter, which I co-wrote with Jon Caven-Atack, Mansi J. Shah, and Simran Malhotra, adopts a social psychology lens to explore the formative influences of lone-actor terrorists. Specifically, we use the BITE model (Behavior, Information, Thought, and Emotional control) to help us understand how the internet, in a fashion similar to a single authoritarian cult leader, can exert undue influence, resulting in a form of online indoctrination. In the article, we profile three individuals who committed acts of lone-actor terrorism and look at how this BITE model may help to explain their motivations and actions. The article (abstract below) is one of many in a set of illuminating contributions to the topic of lone-actor terrorism that is contained in Lone-Actor Terrorism: an Integrated Framework.

In collaboration with Jon Caven-Atack, Mansi J. Shah, and Simran Malhotra, I wrote chapter 19, Lone-Actor Terrorism: Understanding Online Indoctrination. Below is the official abstract from the text.

This chapter explores the social-psychological forces that destructive/authoritarian cults use as they apply to lone-actor terrorists influenced online. We contrast the methods used by authoritarian religious, political, commercial, and therapy groups to show that virtual sources – most notably the World Wide Web – can replace in-person recruitment and inclusion. These lone-actor terrorists adopted a worldview and became part of a virtual society. This virtual social bond can be as powerful as a real social bond. We consider case examples to show the dynamics of exploitative persuasion in the build-up to their violence. The BITE model of Authoritarian Control and Influence Continuum is presented as a way to evaluate undue influence.

This chapter aims to answer these questions and provide mental health practitioners with a map to help them navigate through the precarious territory of the minds of those who perpetrate terrorism. In Section 1, we will discuss, describe and delve into some of the major psychological determinants and social influences of violent extremism. In Section 2 we offer insights into the pernicious phenomena of undue influence, brainwashing, and mind control and the roles that each potentially plays in the cognition, character, and conduct of members of destructive cult organizations. We conclude with clinical considerations for mental health practitioners as well as suggestions for how to stymie the proliferation of dangerous mind control cults of all kinds.

How This Important Book Came To Be

It is no surprise that a book rooted in so many disciplines originated with an individual whose life experiences were, in a word, multidisciplinary.

In his discussion with me, Dr. Holzer calls the book a “full circle moment” originating with his early experiences in the airforce, which led to an interest in national security and international relations. Later, he became interested in psychology, where he’s been accumulating experience for decades. During this time, especially in his work doing forensic psychology, he saw an opening to make links between forensic mental health and national security applications.

His experience fits squarely with a topic like lone-actor terrorism which, as Dr. Holzer notes, involves clinical aspects (i.e. psychiatry, behavioral psychology, developmental psychology) as well as non-clinical areas like the internet, law enforcement, and criminal history. This blend of clinical and non-clinical perspectives, which Dr. Holzer lived throughout his career trajectory, made him a perfect fit for a text which pursues complex questions around lone-actor terrorism through these multidisciplinary lenses.

Indeed, as Dr. Holzer says, the issues explored in the book are “complicated.” He notes that, contrary to common views, lone-actor terrorism “is not exactly one person acting in a vacuum to create some chaos or violence…it’s multi-layered.” And that is precisely why, he argues, “it’s worth…stepping back and getting…a wide-angle view of what’s involved…[including] a number of influences and contexts, ideologies.” As the book integrates this approach, it pushes us past simplistic explanations, poses new questions, and proposes possible directions and answers.

It is a tragic yet well-known fact that the topic of the lone-actor terrorist has taken on an increasing amount of interest as incidents increase. This book responds to a need for guidance from a wide audience of professionals: clinical and forensic mental health professionals, centers that study terrorism, organizations that conduct security studies, the realm of international relations and politics, law enforcement, intelligence communities, and legislative branches, and more.

My Interest in This Project

On the podcast, Dr. Holzer and I discuss factors that drive individuals to commit acts of lone actor terrorism. There is no definitive, settled mixture of factors, but Dr. Holzer is drawn to some common variables. For example, often lone-actor terrorists have a clinical background or may have experienced abuse. This perspective helps us to hone in on some major causes of lone-actor terrorism.

I’m also interested in the question of what motivates lone-actor terrorists, but I approach it from a different angle in my article, building on my background in studying undue influence and mind control. This social psychology lens emphasizes how social influences can drive any individual to be swayed into behavior that may otherwise seem not to fit their profile.

Regarding my journey into radicalization, I came from a background defined by a stable family upbringing, a positive educational experience, and a strong peer group. It was my vulnerability after a breakup, followed by the undue influence of a group of Moonies, that led to a total upheaval in my values. This experience continues to motivate my work, and my chapter draws on this approach of foregrounding the role of social influence. In particular, I discuss the role of the internet as a social force of undue influence that can motivate lone actors.

I was fortunate to meet Dr. Holzer when he gave a presentation on psychiatry in the law. After meeting and establishing mutual interest, he invited me to contribute this chapter to the text. I’m grateful for the opportunity as well as my co-authors and the guidance of the folks at Oxford University Press. My involvement in the book led to our discussion on this podcast, a wonderful conversation for which I am immensely grateful to Dr. Holzer.

Table of Contents for Lone-Actor Terrorism: an Integrated Framework