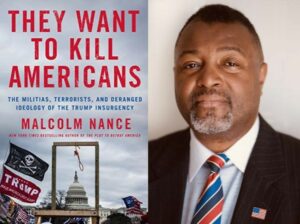 In the current global political climate, the threat of terrorism from both foreign and domestic groups is an important concern. However, many approaches to fighting terrorism lack a fundamental understanding of the cult tactics of undue influence and the techniques of hypnosis that terrorist groups use to recruit and maintain control over their members.

On a recent episode of my podcast The Influence Continuum, I interview terrorism expert, Malcolm Nance. Nance and I have respected each other’s work since 2007 and he has stated how he agrees with my models regarding the authoritarian cults for Al-Queda and ISIS. Nance has traveled to Ukraine and has been informing the world about his take on Putin’s invasion and what to expect.

Nance is an expert on intelligence and insurgency, and he is a counterterrorism analyst for MSNBC. A former US Navy Officer and a thirty-year veteran of the US intelligence community’s program on combating terrorism, Nance has had a wide range of field and combat experience in the Middle East, Southwest Asia, and Africa. He has been a Middle East policy advisor to the US and international governments on special operations, homeland security, and intelligence.

In his latest book, They Want to Kill Americans: The Militias, Terrorists, and Deranged Ideology of the Trump Insurgency, Nance uses his knowledge of terrorist groups to examine the active Trump-led insurgency in the United States.

When discussing terrorism, most people immediately think of Islamic extremist groups like Al-Qaeda and ISIS (also referred to as ISIL), but terrorist groups can be diverse in ideology. In the United States, historically, Neo-Nazi and white power groups have committed far more acts of terrorism than Islamist extremist groups.

Violent extremism is a form of undue influence. According to the FBI’s Countering Violent Extremism program, violent extremism is “encouraging, condoning, justifying, or supporting the commission of a violent act to achieve political, ideological, religious, social, or economic goals.” This definition is broad and includes groups motivated by a variety of ideologies, including white supremacy, anti-abortion, nationalism, etc. Still, the terms “violent extremism” and “terrorism” are most frequently used to refer to extreme Islamist groups.

Terrorist groups use a variety of cult tactics that are outlined in my BITE Model of Authoritarian control, including deception, manipulation, isolation from friends and family, and love bombing. Increasingly, extremists have relied on online recruiting. Some extremist groups threaten to harm members’ families to keep the members obedient and loyal. Terrorists may even confiscate people’s passports and other important documents to prevent them from moving about freely.

Like in any other cult, members of violent extremist groups are deceptively recruited and indoctrinated. Nowadays, much of this recruitment takes place online on social media. Recruiters target people who “like” certain posts on social media and build rapport with them. Then, recruiters use manipulative tactics to draw people deeper and deeper into the group. They begin by asking recruits for small favors, like sharing a video or post. Slowly, recruiters begin to ask for more and more involvement. They never lead by asking a person to commit violence against themselves or others.

Recruiters for violent terrorist groups attempt to make potential recruits feel like they have stumbled onto a new group of friends who will love and accept them. The recruits are often young people who are searching for a sense of community. This technique is called “love bombing.” Recruiters present people with a contrived, insincere, friendship that is only in effect for as long as it takes to convert an individual into a passionate member.

One common cult tactic used by far-right extremist groups in the United States is information control. As a result of the widespread use and effectiveness of this tactic, different Americans are living in completely different realities.

According to Nance, there are three spheres of information, and every American is living in one of them: the Sphere of Normalcy, the Cult Sphere, or the Sphere of Apathy.

The Sphere of Normalcy:

People who live in the sphere of normalcy understand democratic traditions and pay attention to politics. These people are aware of Trump’s efforts to undermine democracy and are aghast at what is going on.

The cult sphere includes people who have been indoctrinated into the cult of Trump. They live in a false reality. This mirrors Putin’s Information Control within Russia. Trump’s true believers think positively about Putin. Although QAnon has splintered and morphed, the ideology was that Trump is anti-trafficking- a supposed hero who will take down global networks of power. The disinformation campaign demonizes the political opposition and accuses top Democrats of raping, abducting, and murdering babies to get adrenochrome— in a version of the debunked Protocols of the Elders of Zion.

When I was indoctrinated into the Moon cult, a far-right authoritarian cult, I was programmed to believe that Democracy was satanic, and I was trained to use thought-stopping techniques any time that somebody presented evidence that opposed my cult’s ideology. Trump does the same thing to control his followers.

Trump employs information and thought-control techniques to prevent his followers from questioning their mindset. For example, by declaring any piece of information that opposes his ideology to be “fake news” and by calling the press the “enemy of the people,” Trump tells people not to believe anything that does not fall in line with the way that he wants them to think.

The Sphere of Apathy:

People in the sphere of apathy do not care about politics, and they block out any relevant information about what is going on in the world. People in this group unknowingly enable Trump cultists.

How to Help People Who Have Been Indoctrinated by Terrorists

For many people who have friends or family members who have been indoctrinated into terrorist groups, their first reaction is to get frustrated and completely cut off contact. Another common reaction is to yell at them and explain to them why their beliefs are incorrect. These are both the wrong reactions.

It is important to maintain contact with people who are in an authoritarian cult. If they lose contact with all their outside friends and family, they become more isolated and fall deeper into the group. Instead, let your loved ones know that you miss them. Remind them of their values and of the person who they were before they joined the cult.

Malcolm Nance’s book: They Want to Kill Americans: The Militias, Terrorists, and Deranged Ideology of the Trump Insurgency

Malcolm Nance’s book: Defeating ISIS: Who They Are, How They Fight, What They Believe