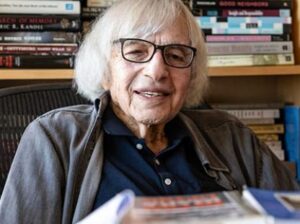 I’ve been hosting the Influence Continuum podcast for over seven months, and I’ve spoken with guests on topics ranging from election integrity to 4th Generation Warfare and the Christian Right. It is plausible to say that I would not even be investigating any of these topics had I not encountered the work—and later met—the esteemed guest of my first ever podcast episode, Dr. Robert Jay Lifton.

Dr. Lifton joined me for an urgent conversation when the show debuted back in January 2022.  I owe an immense debt of gratitude to Dr. Lifton’s work and his mentorship, both of which resulted in significant milestones for me. His intellectual work, specifically Thought Reform and the Psychology of Totalism: A Study of ‘Brainwashing’ in China, was fundamental to my deprogramming from the Moonies. Reading his psychological analysis of brainwashing in the 1950s style of Chinese Communism, I was alerted to the parallel elements of mind control present in my own cult group environment.  When I later met him in person, his mentorship helped me pivot from being a victim of the cult to a survivor. This shift was instrumental in helping me to later develop my work, counseling others on mind control and undue influence, and serving as a model of “getting out” (see the #igotout movement).

Thought Reform and the Psychology of Totalism was published in 1961. But Dr. Lifton’s work on politics, culture, and psychology has continued since then, his analysis of our world remaining urgent today. He has taken on topics from the transformative impact of survivors of Hiroshima to the dual identities of Nazi Doctors. His most recent book is called Losing Reality: On Cults, Cultism, and the Mindset of Political and Religious Zealotry.

SHIFTING FROM VICTIM TO SURVIVOR

In our discussion, we focus on the potential of shifting from a victim to a survivor and what that means for individuals and society. Indeed, Dr. Lifton believes survivors are uniquely positioned to help us navigate a precarious world animated by a bombardment of existential threats, one that is so clearly on the brink of geopolitical disasters.

Similar to my own work on The Cult of Trump, Lifton sees the “deep danger” our U.S. democracy faces. Concurrently, he sees a widespread increase of “death anxiety,” exacerbated by mass events like the COVID-19 pandemic, the threat of nuclear war, and the current and impending damage of climate change.  Alongside these catastrophes, Dr. Lifton notes, we are presented with a denial of these dangers, from manipulative politicians like Trumpists to conflict-baiting voices in the media.

This blend of actual threats that surround us, coupled with denial, weighs on us as creatures who experience what Dr. Lifton names symbolic immortality. As Lifton argues, we are “the animal that knows we die [and] we spend much of our lives dealing with that knowledge.” This feeling of immortality can be expressed biologically through children and grandchildren, or through a sense of being connected to something larger than ourselves.

THE ROLE OF SURVIVORS IN A PRECARIOUS WORLD

The problem now—especially with an increase in death anxiety—is that a feeling of larger human connectedness is threatened. This threat can lead to the increasing appeal of religious, spiritual, and secular phenomena, and it can challenge us to find new sources of fulfillment.

Here, again, Dr. Lifton sees survivors as key, even “emerging at the forefront” of this process of “renewal.” In one example, he points to how survivors of the Hiroshima bombings are now leading voices on the dangers of nuclear war, using their “authenticity and experience to make [themselves] heard.” In other words, these individuals’ shifts from victims to survivors have been critical to helping the rest of the world face the threat of nuclear disaster. Their efforts open more hopeful narratives, offering us a way to enact healthy forms of symbolic immortality.

I can speak first-hand to the power of shifting from an identity of victim to survivor. In another timeline, without being able to reference Dr. Lifton’s research on brainwashing, I may have continued as an influential member of the Moonies. In yet another timeline—but without the chance encounter of his mentorship—I may have exited the cult successfully but been left unable to make the transition from victim to survivor. Encountering Dr. Lifton’s intellectual work helped me to leave the cult, and experiencing his personal mentorship enabled me to transition to being a survivor, later helping me to use my experience for something positive.

THE CHALLENGES OF SHIFTING FROM VICTIM TO SURVIVOR

The transition from victim to survivor is not automatic. It takes a thoughtful approach. When I met with Dr. Lifton in his Yale office, he expertly used the classic psychological technique of framing to see myself not as a novice lacking worth, but as an emerging expert with something important to contribute.  As Dr. Lifton told me at the time, he just wrote about the experience (of brainwashing), but I lived it. I went on to use this guidance to interpret my experience in the Moonies through the lens of academic psychology, earning a Master’s in counseling in 1985. I then started a practice, in which I’ve counseled hundreds over decades.

This approach he brought to me—one that persists in his work today—contrasts with an ideology that says victims in some way deserve the treatment they receive. This attitude is a dangerous and inaccurate ideology bolstered by spiritual doctrines like the law of positive attraction. Instead, Dr. Lifton sees promise in survivors helping us to confront the immense challenges around us, and ahead of us, none of which are preordained.

That does not mean he is, by default, optimistic. Nonetheless, I asked him if he had a reason for hope—especially focusing on the role of how survivors can be transformative, even “heroic resistors.”

He responded: “I can’t claim anything like heroic behavior, because I haven’t suffered these things, but I have in my work tried to emphasize what can be grasped in the way of hope from each of these studies. I mentioned, for instance, the extraordinary role of Hiroshima survivors in influencing the world. Their message about nuclear weapons can’t be erased and has had its very positive developments…”

He continued: “I would also say we are not able…to predict the future. The future is open. The future is not ordained. So, by seeing the terrible threat to the democratic future that is in itself a dimension of hope which we can pursue in favor of renewal.”