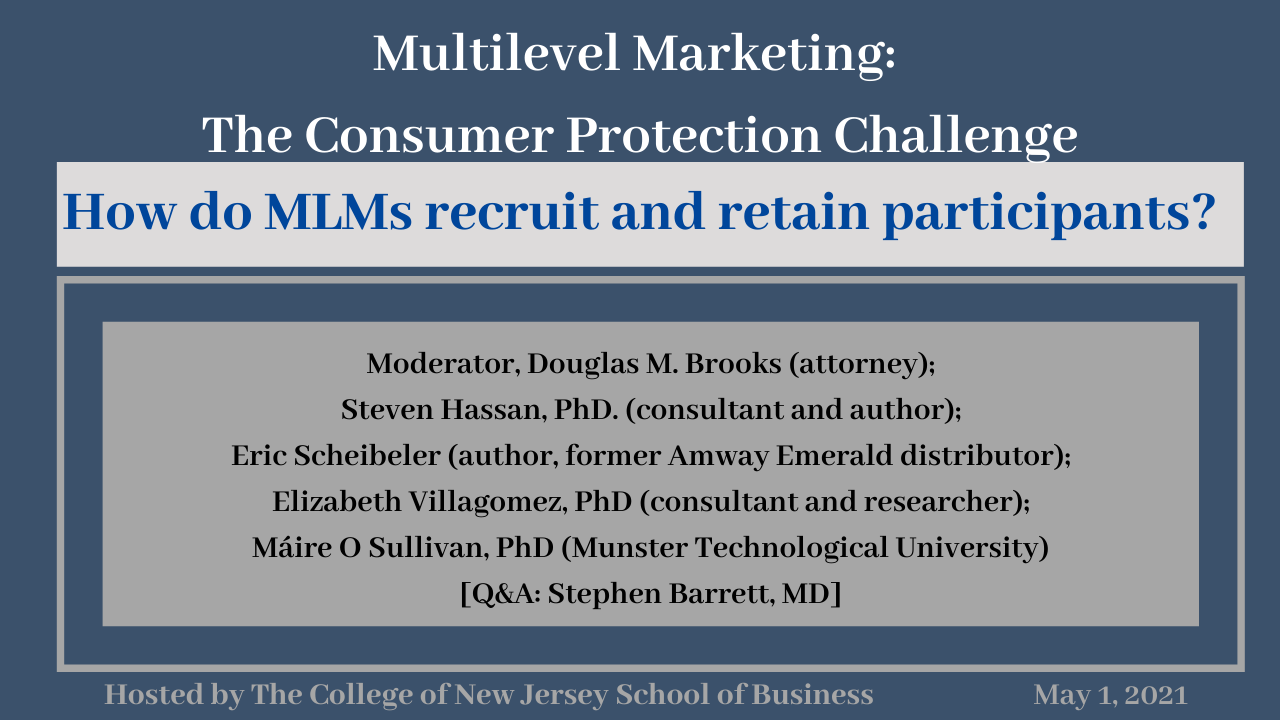 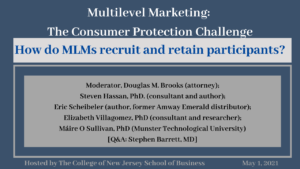 I recently had the exciting opportunity to be one of 37 Panelists at the First Global Conference on Multilevel Marketing (MLM). The virtual conference was held by the College of New Jersey’s School of Business, on April 30th and May 1st 2021 and attracted 500 participants from 49 countries. Pyramid schemes have been illegal for a very long time, but the term multilevel marketing seems to be the term of choice. There is a heavily funded lobbying group for some 300 multilevel marketing organizations, the Direct Selling Association, which seems to have a lot of influence in politics. I am told there were more than a few attorneys representing MLms in attendance.

Multilevel marketing has been a problem for a long time, but the scope and severity have grown over the past several years. The fear and anxiety created by the COVID-19 pandemic restricted in-person shopping. This led to a  major increase in direct-to-consumer online sales. Products like essential oils and nutritional supplements were advertised as being effective against COVID. In response, the Federal Drug Administration (FDA) had to issue hundreds of warning letters. Additionally, there is a growing anti-MLM movement on social media. The Federal Trade Commission (FTC) is tightening its focus on MLM groups with recent enforcement actions.

How Does Multilevel Marketing Work?

Noah Joshua Phillips, FTC Commissioner, gave the opening keynote address. Phillips noted that direct selling to consumers is not per se a negative business model.  Relationships between seller and buyer that are a feature of direct selling can often be very positive. Direct sales, in person or online, can be particularly important in reaching underserved communities.

Multilevel marketing, however, utilizes a network of independent salespeople. They sell products directly, but are also expected to recruit others to work for the company. Each distributor is in a chain of  income. People who are ahead in the chain are considered “upline,” (supervisors, top earners, company owners, for example). Those who were recruited by a particular distributor are considered “downline.” Most often recruitment brings in the greatest portion of a distributor’s income, rather than sales.

How Do Multilevel Marketing Groups Recruit and Retain?

This panel discussion was moderated by Attorney Douglas M. Brooks. Brooks has litigated class action suits against major MLMs such as Herbalife and Nu Skin. He has also represented, pro bono, consumer advocates sued by MLM companies and cults. Brooks was featured in the award-winning documentary on Herbalife “Betting on Zero.”

In the panel presentations, I described my doctoral research and development of the BITE Model of  Authoritarian Control: Undue Influence, Thought Reform, Brainwashing, Mind Control, Trafficking, and the Law. This model was heartily received as a valuable tool for assessing an organization’s use of deceptive recruitment and retention tactics.

My colleagues who participated in this panel come from a range of backgrounds and experiences.

All of us are committed to protection of the public by exposing the deceptive tactics used by multilevel marketing groups to recruit and retain independent, direct distributors.

A major concern of the FTC is to enhance and ensure consumer protection and enforcing regulations to reduce potential harm. Projected income must be truthful and realistic for a “typical” distributor, rather than focusing on the income of the top 1%. Projected income must be calculated after expenses. Typical expenses and purchases required of distributors need to be outlined. “Qualifications” used to disguise true income statistics are not acceptable. Presenting facts in ways that are overly difficult to understand does not meet the mandate for “truth in  advertising.” What is important is the “net impression.”

To become a distributor for a multilevel marketing group, numerous legal documents must be signed. These are sophisticated, commercial  agreements. Arbitration and non-disclosure, waiver of the ability to participate in class actions, and other complex, legally binding requirements are included. Attorney Brooks described it succinctly, saying “most people have no idea what they are getting into.”

Distributors who have signed these agreements are often shocked to realize they are required to purchase inventory beyond what they can realistically sell. Or they are stuck with inventory because the return policy is so restrictive it is useless. During our panel discussion, Eric Scheibeler noted that he had checked eBay that very morning. He discovered 46,000 listings from Mary Kay distributors trying to unload their product inventory.

Do you dream of

Direct selling depends on social interaction and development of relationships. Recruitment of new distributors is even more dependent on the perception of friendship, caring, and other socially positive images.

Social aspects of recruitment often involve large seminars or other types of scripted events. Successful distributors (the very small minority) present their inspiring rags to riches stories. Couples may appear together; the husband will talk proudly about providing for his family; his wife will swear their marriage has become so much more fun and loving. One recruitment event described at another panel presentation was held at a casino, complete with loud music and good food. All of the recruitment is done in specifically designed small increments. A recruit becomes “hooked” before they are fully aware of what they are buying into.

When distributors experience doubt and ask questions, they are subjected to emotional manipulation. One supervisor told his questioning distributor to go home and tell his wife that she didn’t deserve his best effort–because that is what he was saying by deciding to quit. Just as is done in all authoritarian organizations and cults, MLMs teach their distributors to avoid negative people (i.e., anyone questioning their involvement in the group). Constant advice to think only positive thoughts (thought-stopping) is common. Mantras such as “quitters never win and winners never quit” are repeated over and over again in seminars.

Pressure to stay in the MLM group also comes from within. Social media plays a large part in the selling and recruiting process. Distributors spend a great deal of time, effort, and money to establish their presence on social media sites. The social media “community” is a source of support. Giving it up is frightening. People have often recruited close friends and family into the organization and suffer a great deal of shame and guilt when it falls apart. There is legitimate fear of retaliation from the organization itself.

Freedom of Mind – Truth in Advertising and Informed Consent

The Q&A period at the end of our panel presentations raised several thoughtful ideas. One that most interested me was whether it would be possible to make “recruitment” as it is done in MLMs illegal.

I believe that every individual has the right to make their own decisions. Individuals and organizations should be free to recruit. What is patently wrong and should be illegal is undue influence over a recruit’s decision-making process. The recruitment and retention tactics of MLMs are prime examples of undue influence. They rely on false representations, appeals to emotion, and very limited disclosure of the reality of multilevel marketing. Informed consent should be the driving force behind development and enforcement of regulations. Only then can free decisions be made.

Video of Talk: “How Do MLMs Recruit and Retain Participants?”