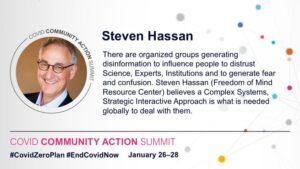 The COVID-19 pandemic has wreaked havoc worldwide, resulting in more than two million deaths, seriously weakening or destroying economic and social systems, resulting in a tremendous increase in mental health problems. A frantic search for effective vaccines has consumed the scientific community since it was first identified.

Vaccines have now been developed at record speed. The elaborate and time-consuming process of manufacturing and distributing them to the general public has begun. Although there are certainly problems and a lack of coordination in many of these efforts, most people are relieved and are anxiously awaiting their turn to be protected.

Unfortunately, a backlash against the vaccines from several directions is growing. Some of the protests have become violent, exhibiting signs of cult-like behaviors. A recent rally at Dodger Stadium in Los Angeles was such an occasion. California has suffered over 40,000 COVID-related deaths and soon becomes the state with the highest death toll related to the pandemic. Despite this grim reality, the anti-vaccination protesters at Dodger Stadium carried signs saying “COVID = SCAM” and “Save Your Soul – Turn Back.”

New England Complex Systems Institute (NECSI) invited me to participate in their recent COVID Community Action Summit (C-CAS). In support of End Corona Virus’s efforts, an international volunteer organization, C-CAS was held to provide more tools and expertise necessary to address the global crisis created by this deadly virus. Effectively overcoming anti-vaccination efforts and vaccination hesitancy is critical in making the response to COVID-19 as successful and quick as possible.

Many people may be merely hesitant about the COVID vaccine specifically. These are people who are not anti-vaccination as a general principle but are perhaps concerned that the vaccines may have been developed too quickly or not tested sufficiently to be safe. We can address hesitancy by providing reliable information to instill confidence in the vaccination process. Some of the anti-vaccination mistrust regarding COVID may have arisen from the rapid flow of information about this novel virus that frequently changed as medical experience treating the virus grew.

A lack of understanding about the scientific process may have contributed to this confusion and mistrust. “Healthy skepticism” is an understandable response, and providing information about the scientific process (hypothesis, testing, peer review by the scientific community) as well as a basic understanding of the reasoning and process behind emergency use and approval by the FDA may be helpful. Heidi Larson, Director of The Vaccine Confidence Project, has been doing scientific data collection and analysis also participated in the panel I was on at the COVID Summit. Dr. Larson’s verbalized that my presentation resonated with some of her research and recommendation conclusions.

Demonstrations against COVID vaccinations are part of the overall anti-vaccination movement, which has advocated on both ends of the political spectrum. The Children’s Health Defense, led by Robert F. Kennedy, Jr., includes environmentalists concerned about chemical pollutants and “Big Pharma.” They have criticized Dr. Fauci and the CDC, accusing them of rushing the vaccines into development and making a sweetheart deal for the drug companies.

On the other side of the spectrum are conservatives who oppose vaccination requirements and other mandates such as wearing masks or social distancing because they distrust the government in general and consider these restrictions a violation of their rights. Wherever they may land on the political spectrum, anti-vaccination groups sometimes refer to themselves as champions of “medical freedom,” and all use undue influence.

Any particular anti-vaccination group might not meet most of the BITE model of Authoritarian Control. However, the methods by which hard-core anti-vaccination groups operate and disseminate information involve destructive cults’ tactics. The information is presented in a context of us-versus-them, supported by paranoid thinking (conspiracies between drug companies, the World Health Organization, and Bill Gates), and faulty “scientific” information, such as ascribing the virus to a botched attempt to create a vaccine in the first place.

An effective response to anti-vaccination efforts begins with understanding fear and phobias. Fear is an innate survival skill that serves to protect us from danger. Being afraid of a saber-tooth tiger was a good thing! However, to determine whether a threat is real, the brain’s frontal cortex needs to differentiate between real danger and “believed danger.” One difficulty in dealing with anti-vaccination messages is they are a mixture of natural and believed risks. (This is true of messages from cults in general. The assertions of QAnon that liberals are engaging in child trafficking is a prime example.) Child trafficking is a real and horrible problem, toxic chemicals are a realistic concern, and the environment is in danger on many fronts. However, a constant barrage of mixed messages creates confusion and uncertainty, damaging an individual’s ability to assess risk in any rational way. This confusion ultimately leads to a deep-seated, persistent fear (a phobia), and mistrust of whoever or whatever (government officials, media, vaccines) is considered dangerous.
During my 45 years of helping people understand and free themselves from undue influence, I have developed a model for intervention that I call the Strategic Interactive Approach, designed to create a network of family, friends, clergy, and others to do an ethical, coordinated intervention. The ultimate goal is to empower a person to think for themselves through a respectful, psychoeducational approach. For this intervention to be most effective, it should be done at the right time, by the right person, and in the proper context. (For an in-depth discussion of phobias and ways they can be addressed in individual cases, see Chapter 10 of my book, Freedom of Mind.)

Short-Term Responses to the Anti-Vaccination Effort

Responding to anti-vaccination messages would be most effective if done in the same spirit as I advocate for all interactions with a person who has succumbed to undue influence. Be respectful, don’t argue with their position, or characterize what they believe as ignorance or a result of being gullible. If the person is coming from a religious perspective based on the Abrahamic faith traditions (Jewish, Christian, Islamic) and questions the legitimacy of science, a gentle question of how they understand the concept that humans were created with free will and not as robots may be appropriate. Ask them to help you understand their position and just listen. Give them information about other groups and beliefs presented through mind control tactics and let them connect with their own experience.
In the long-term, a coordinated and wide-reaching effort addressing all forms of undue influence is critical. A crucial question arose during this Summit:  How do we deal with undue influence and cult activity on a country-wide (and ultimately worldwide) basis?
The immediate concern of this Summit was dealing with COVID-19, and my response may seem at first like a diversion from the main subject. But mind control tactics are the foundation for all destructive group responses to important issues of public health. As a society, we need a broad understanding of mind control and the recruitment and control procedures of destructive authoritarian cults that occur through social media and the internet in general.
The idea that we live in a “post-truth” age is being repeated frequently and used as a catchphrase to describe our current social and political dilemmas. It is not true! Truth is still the truth, and facts are still facts. However, we do live in an age of influence, much of it ill-intentioned. It is often disguised or hidden from conscious view. In this rapidly changing and increasingly digital world, the tools to differentiate and control the spread of undue influence need to be strengthened. Without such control, we are left at the mercy of unscrupulous and seductive promotion of dangerous ideas and actions. From the highest echelons of government to the students in middle school, everyone needs to be educated about undue influence and its destructive effects.
I firmly believe that scholars and scientists need to have a humble approach and that leaders should be able to say they don’t have all the answers and seek more data and strategies to deal with any issue. Therefore, I am more than willing to admit that I cannot address this issue by myself. There is a desperate need to educate everyone about undue influence and its destructive effects.
I strongly suggest that it begin with our national government, particularly by Congress inviting a panel of cult experts to present their findings and proposed interventions. The American Psychological Association has included brainwashing as an actual diagnosis (DSM-5), but the extent to which the mental health profession is aware of it and its damaging effects is not sufficient. The use of undue influence by state actors and authoritarian cults to spread fear of governments and established institutions, distrust of science, and unleashing of violence is a public health issue of the same magnitude as climate change or direct health threats such as COVID-19. The same passion and commitment evidenced in our response to the pandemic need to lead our efforts regarding the spread of dangerous misinformation. Otherwise, our democratic way of life may not endure much longer, and we will be left in the hands of anti-science and destructive, authoritarian leaders.

Video of My Presentation at the NECSI Conference