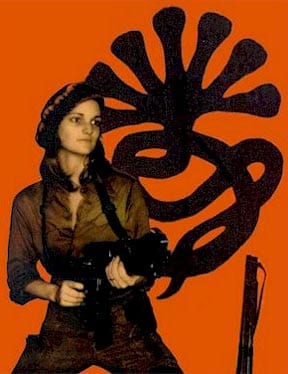 I recently read a NY Times book review of AMERICAN HEIRESS: The Wild Saga of the Kidnapping, Crimes and Trial of Patty Hearst by Jeffrey Toobin and listened to an interview done with the author on NPR. Honestly, I was horrified at his lack of knowledge and understanding about undue influence and disagreed 100% with his conclusions. I felt like I was listening to a “cult apologist”- someone hired by cult groups to defend the group and say they are “fine”- for example, G. Gordon Melton flying to Japan after the sarin gas attacks to defend the Aum Shinrikyo cult. The cult leader, Shoko Asahara, is on death row for being guilty of the terrorist attacks on over five thousand of Japanese citizens.

I am upset. You see, I was deceptively recruited into the Moonies in February 1974- the same month Patty was kidnapped from her apartment, put in a closet, raped, and tortured until she was remolded to become “Tania”- a radical extremist. I was deprogrammed out of my cult in May of 1976, but Patty was arrested, tried, and sent to jail- despite Robert Jay Lifton and Margaret Singer testifying on her behalf as to their (and my) contention that she had been brainwashed into the cult. I could not believe the miscarriage of justice to put this young woman in jail. I feel like F. Lee Bailey’s incompetence at defending her would not happen today. We simply know too much about how the mind works and about the forces of undue influence. (Please see my previous blog about Attorney Alan Scheflin’s Social Influence Model (SIM) as well as my blog for the new Open Minds Foundation on my BITE Model and the Influence Continuum.)

Victims of undue influence quite often stay with their captors, even when they have a chance to escape. This is often confusing for the public, but it’s part of the control that many victims endure. I appeared on a 2003 John Walsh daytime talk show in which Patty Hearst described being tortured and indoctrinated. Like Hearst, when kidnap victim Elizabeth Smart was first found by police, she denied her true identity and didn’t run away. I have also spoken at a Department of Justice Amber Alert conference to explain the phenomenon of the programmed cult identity and why victims like Patty Hearst, Jaycee Dugard, and Smart become “different people.”

Toobin’s book, American Heiress, puts the focus on Hearst and her family rather than where it should be: She was violently kidnapped and indoctrinated by the Symbionese Liberation Army (SLA) cult. The above mentioned review sweeps the abduction and indoctrination of Patty Hearst to the side. Rather, it paints Hearst as a willing participant in her indoctrination, and even claims that a consensual love affair occurred. One particular statement, “she made choices and committed crimes that reflected her conversion from victim to perpetrator,” is of serious concern. To say that a woman who went through such a horrible experience “fell in love” with one of her captors is the worst kind of victim blaming! Informed consent requires an enthusiastic well informed, “yes,” and kidnapping, rape, torture and mind control is not!

Patty Hearst comes from a high-profile, affluent family and the crimes she was coerced into committing were serious, which is why her story continues to gain national attention. However, the methods of undue influence used on her are not unique. We see this type of manipulative control used everyday in cases of domestic abuse, human trafficking, terrorist recruitment, and cult conversion. After months of indoctrination and exploitation, I too became a person who would have done anything to be obedient to my superiors in the cult. I too was convinced that I was happy and doing what was right. Luckily for me, I was rescued by my family before I ever was asked to commit a violent crime. But, I am pretty certain that I would have done anything I was directed to do if I had remained a part of the cult.

Freedom of mind is the right of everyone on this planet, but just like any freedom it can be taken away. That is exactly what happened to Patty Hearst when she was abducted. That is exactly what happened to me when I was indoctrinated into the Moonies. And, that is exactly what happens every day to thousands of people worldwide. The time has come for the courts, the media, and the public to acknowledge that undue influence is real, and it is dangerous. The public needs to learn the warning signs, and they need to learn what really goes on when it happens. Victims of undue influence can be rehabilitated and lead full healthy lives. But, this will not happen unless the world starts to understand what’s happening and stops blaming the victims.