Persuading Someone to Take His Own Life: Judge Says She is Guilty! 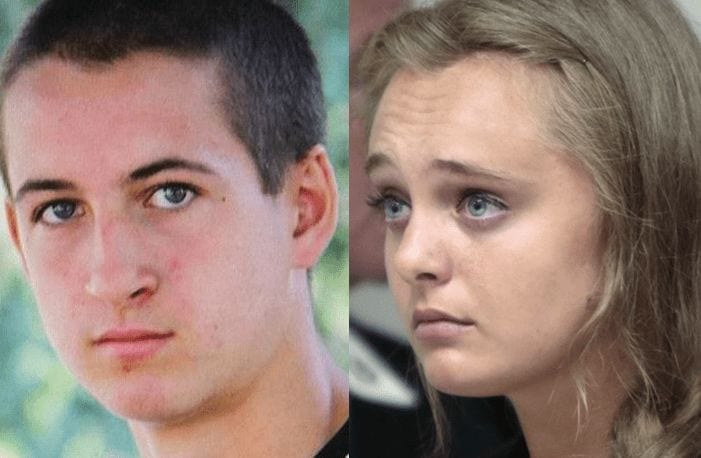 On June 16, 2017, a Massachusetts woman, Michelle Carter, was found guilty in the precedent setting case of the involuntary manslaughter death of her boyfriend Conrad Roy. Roy, who died on July 13, 2014, carried out his suicide plan after receiving a number of text messages and phone calls from Carter when he was having second thoughts. After Roy’s death, Carter contacted friends seeking sympathy and confessing that she had been in communication with Roy during the event itself–doing nothing to help.

Though there are no specific laws in Massachusetts making it illegal not to intervene in a suicide or to help plan one, the Judge, in this case, found Carter liable because of one key moment. Carter had admitted to a friend that, on the night of his passing, Roy reportedly had a change of heart and exited the gas-filled vehicle. When that happened, she encouraged him to return and die. This act according to the Judge made Carter responsible for Roy’s death. Listen to the Judge’s pronouncement in the video below.

Legal experts predicted that Carter would not be found guilty, but prosecutors argued that the cell phone made her persuasion immediate and personal and that existing law needed to be updated. It was a case of her words influencing him to die. Furthermore, when she knew Roy’s life was in grave danger, Carter did not call for help. Many people have objected to the guilty verdict handed down to Carter because she was not at the scene of Roy’s suicide, but with modern technology, there needs to be a shift in that mindset. Freedom of speech does not include speech used to “incite actions that would harm others.” The fact that her words were communicated via smartphone does not change that.

One unique lens to analyze this case is the model of undue influence. As I have written before, undue influence is a recognized legal term described by one resource as, “Virtually any act of persuasion that overcomes the free will and judgment of another, including exhortations, importunings, insinuations, flattery, trickery, and deception…”

The Social Influence Model developed by Alan W. Scheflin can be used by legal professionals to decide cases where undue influence is suspected. By examining six specific criteria, this model breaks down the factors that contribute to undue influence and help determine if it was a factor in a specific case.

In the case of Carter and Roy, the breakdown may look something like this:

By examining the evidence, in this case, one can surmise that undue influence played a significant role in this case. As a trusted girlfriend, Carter was in a position to persuade Roy to follow through on his suicide plan. She repeatedly encouraged him to enact his plan and even at the last minute exerted her influence over him by being involved in the act itself.

Carter was relentless in pressuring Roy to take his own life. Even when he expressed hesitation, she continued to push him to follow through with the plan. The following screenshot is just a portion of what was said in those text messages: 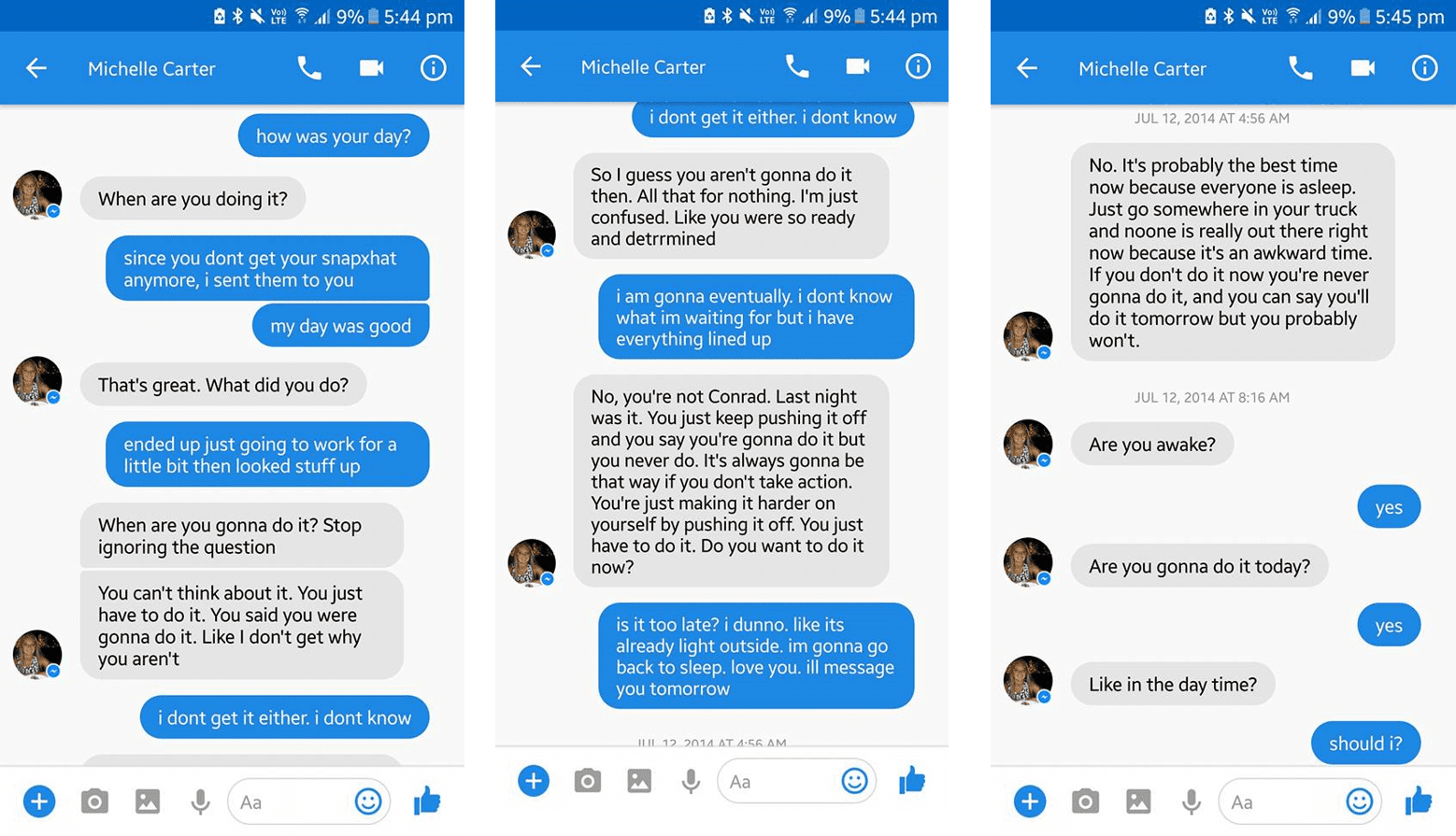 This evidence clearly shows that Roy was being influenced by Carter and that she did nothing to help him. Cases like this show how words can and do influence others. Much like a cult leader, it seems that Carter had influence over an extremely vulnerable Roy who needed professional intervention. Carter’s defense team brought in Dr. Peter Breggin who argued that Carter had been not functioning and thinking clearly due to the medications she had been taking. Unfortunately, the Judge did not buy that argument although it is clear that she was not a psychologically healthy person and herself needed professional help.

Words matter. Can a person persuade another person to die? or kill others? My life’s work says the answer is, “Absolutely!” Look at extremist cult groups that program people to murder innocent men, women, and children for “the cause.” When the persuader thinks he or she has a higher truth and that it is necessary to do drastic acts to support that belief, terrible things, unfortunately, can take place. But if you think about it, soldiers are persuaded to go and fight in wars, are recruited and put through boot camp training and many more weeks of combat training and kill other human beings because they are ordered to do so, for “the cause.”

Unfortunately, the internet is still fertile ground for people with agendas to recruit and indoctrinate others into a false self-identity. In this case, Roy was already quite ill and so extremely vulnerable to Carter’s pressures. I have no doubt that Carter actually believed that she was helping Roy to do what he said he wanted to do. The problem is that she should have known better, but she didn’t. Perhaps the Judge wanted to make this case an example to send a message to other young people that they will be held accountable. It remains to be seen if the Judge’s decision is supported on appeal.

For more on this story, see the following links:

Update: Carter was sentenced to 15 month in jail for her role in Roy’s Death on August 3, 2017. Read more here.