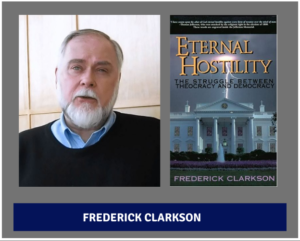 Freedom of Religion is one of the basic rights guaranteed by the United States Constitution. Ironically, the most serious current threat to religious freedom comes from those who claim to be most supportive of it. This threat is a highly organized assault on democracy as is evident in a formal agenda known as Project Blitz, established by a coalition of the conservative, Christian right in 2016.

My colleague, Frederick Clarkson, is an author and journalist who has researched and written about the religious and political right for over 40 years. He is currently a Senior Research Analyst at Political Research Associates, a progressive think tank in Somerville, Massachusetts. In 2018, Clarkson exposed Project Blitz, and he and a coalition of religious, secular and civil rights groups created a website called BlitzWatch in order to provide current information and strategies to combat this serious threat to religious freedom in the United States.

How Did Framers of the U.S. Constitution Understand “Freedom of Religion?”

Thomas Jefferson drafted the Virginia Statute for Religious Freedom in 1777, but it took 10 years and the leadership of James Madison to get it through the legislature. (Madison was the principal author of the Constitution and the First Amendment.) The Virginia Statute was the precursor to the First Amendment and was based on the idea that religious beliefs belong to individual citizens and not to powerful religious or governmental institutions. But did Jefferson and Madison, as well as the many others instrumental in framing the Constitution, understand “freedom of religion” in the same, focused way that it is commonly used today?

Clarkson admits that it took him a while to “wrap his head around” the idea that the way they understood that freedom of religion is not really about religion per se. At the time when the U.S. Constitution was being drafted, religion was an integral part of the system of government. The Anglican Church was an agency of the British Empire used to help keep control over the colonies and over other religions. Madison would, for example, have seen first hand the beatings and jailing of Baptist preachers that were common in colonial Virginia. For Madison and Jefferson freedom of religion was synonymous with what they called “freedom of the mind,” and  “freedom of individual conscience.” While these applied to the choices people made about religious beliefs, they were much broader as well.

Individuals who supported or were part of the powerful Anglican Church, and other state “established churches” of the colonial era, were obviously against the concept of religious freedom in that context. And their “descendants” in the Christian Right of today are no less determined to undermine religious freedom and freedom of thought in order to establish a Christian theocratic government.

Project Blitz: The Christian Right’s Playbook for Establishing a Theocracy

Project Blitz was started by the Congressional Prayer Caucus Foundation, an offshoot of the Congressional Prayer Caucus. Randy Forbes, a conservative Christian and former Member of Congress, decided to pull together the best practices and lessons learned from decades of attempts in state and local legislatures to enact theocratic legislation. The legislative manual that was developed contained 20 model bills, along with explanations of the best strategies for getting them passed through local legislatures. Originally, they posted the Project Blitz strategy manual right on their website. They were probably right to think that no one was looking. (Until Clarkson came along).

The goal of Project Blitz is to promote what he calls a Dominionist-driven Christian nationalism by way of posting the Ten Commandments and teaching Bible in public schools, to create religious exemptions from civil rights laws governing LGBTQ rights in adoption and foster care, and in women’s reproductive health, all grounded in distorted notions of religious freedom.

After Clarkson exposed Project Blitz in 2018, a groundswell of opposition was launched by a wide coalition of civil rights and religious groups, including the National Council of Churches, American Atheists, the Baptist Joint Committee for Religious Liberty, and leaders of Reform Judaism. Letters were written to  state legislators opposing the efforts of Project Blitz. On-the-ground opposition along with unwanted media attention led the sponsoring groups in the Fall of 2019 to take down all references to Project Blitz from their websites and go stealth–although their legislative playbook continued to be used by like-minded state legislators. Just as cults often do when their agendas are exposed, Project Blitz was renamed “Freedom for All,” as part of this going on the down low. The rebranding didn’t take, however, and state legislative leaders were left denying any knowledge of Project Blitz, while national leaders mostly refused to talk to the press. State legislators aligned with Project Blitz continue to push legislation based on the model bills, and organized opposition continues, led by the Blitz Watch Coalition.

The recent passing of outrageously restrictive anti-abortion legislation in Texas and Supreme Court’s refusal to block it, may be the most obvious example of the power the Christian Right has gained. Along with the numerous restrictive voting laws that have passed through state legislatures in the past year, it should be crystal clear that the concept of freedom of religion that is espoused by Project Blitz simply means that conservative Christians will be free to impose their beliefs on everyone else. That is clearly not what freedom of religion meant to the framers of the U.S. Constitution.

(Since our interview, Clarkson has published a new story about a Project Blitz offshoot called the National Association of Christian Lawmakers (NACL) which has the backing of top leaders of the Christian Right. They intend to join Project Blitz in taking theocratic legislative proposals to state legislatures. Their agenda includes a model bill based on the infamous Texas Heartbeat Act bill currently in the news.)

What Strategies Are Needed to Combat This Serious Threat to Our Freedoms?

I asked Clarkson at the beginning of our conversation to help us all gain a larger and more hopeful perspective on our current state of affairs. Given the chaos of the Trump presidency and the on-going assault by right-wing, authoritarian conservatives on our democracy, it is easy to be discouraged and even become hopeless. But that is what they are counting on. The fact is that the vast majority does not agree with the theocrats and the insurrectionists.

Clarkson says there are many signs of hope, and there are strategies for positive change. First, we need to take a historical perspective and realize that our democratic institutions are more resilient than we may sometimes think. They have survived previous assaults. (The Civil War, violence toward union organizers, the McCarthy anti-communist era, for example.)

Religious freedom, as Jefferson and Madison sought to advance in their time, meant equality under the law, without regard to one’s religious identity. The tremendous achievement of the Constitution and the First Amendment notwithstanding, religious freedom is still an elusive aspiration for many, and for our society, and something that many of us too often take for granted. We need to do better. The process of extending and defending the rights of all is an essential part of the ongoing project of democracy.

How many of us know extensive details about our favorite sports team but have no idea who serves on our school boards or in our town government or who represents us in the state legislature? It is vital for everyone to become engaged in the political process on the local and state levels, not to simply vote every four years in a presidential election. The best way to save democracy, Clarkson says, is not to cede the playing field to those who want to erode or end it — but to actually “do democracy.” In that regard, he says that there is much that we can learn from the campaign against Project Blitz — and that these lessons offer considerable hope in a seemingly darkening time. Democracy is not a free gift and preserving it can be hard work, but the alternative is to relinquish our precious freedoms enroute to an authoritarian theocratic regime.

Christian Right Denialism is More Dangerous Than Ever: a Reporter’s Guide to the New Apostolic Reformation Part I

When it Comes to Societal Dominion, the Details Matter: a Reporter’s Guide to the New Apostolic Reformation Part II
Project Blitz Wants To Hide Its Christian Nationalist Agenda. It’s Too Late For That. | Americans United for Separation of Church and State (au.org)
The Battle for the Meaning of Religious Freedom Day – Rewire News Group – Religion Dispatches
Project Blitz by Any Other Name | Political Research Associates
The Christian nationalist assault on democracy goes stealth — but the pushback is working – Salon
The Attempt to Redefine Religious Freedom – Freedom of Mind Resource Center