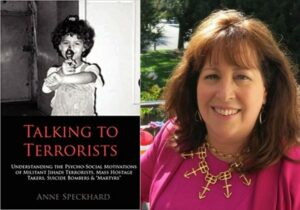 I recently had the honor of interviewing my colleague, Dr. Anne Speckhard, on The Influence Continuum. Dr. Speckhard is Director of the International Center for the Study of Violent Extremism (ICSVE) and an expert in terrorist recruitment and rehabilitation. She is also an Adjunct Associate Professor of Psychiatry at Georgetown University’s Medical School.

The ICSVE was founded in 2015 to provide research, training, and strategic advice to governments, intelligence, defense, international organizations, police, and civilian communities worldwide. The goal of ICSVE is to prevent and deter the threat of violent extremism through programmatic support and developing community resilience.

Speckhard has interviewed more than 700 terrorists, their family members, and supporters, including over 250 defectors from ISIS. She has also interviewed proponents of white supremacy, identifying many parallels between the two. Speckhard often serves as an expert witness in trials of individual terrorists.

Prevention is a Critical Component of Fighting Terrorism

Governments can be notoriously slow in establishing preventative measures. Responding to events that have already occurred rather than being proactive is common. However, combatting terrorism around the world requires effective policies to inoculate people against the sophisticated recruitment activities of terrorist organizations.

The belief that terrorists cannot be recruited through the internet without personal contact used to be an accepted idea. However, Speckhard notes that ICSVE interviews of ISIS travelers showed that 20% made their decision to travel to Syria solely from interactions with and on the internet. The internet also makes it possible for individuals to access hate material that has been banned in their location.

Policies and controls over social media and the internet in general are needed. The proliferation of disinformation is divisive and effectively erodes the stability of democratic societies everywhere.

At my invitation, Speckhard recently presented her research at a meeting of the Program in Psychiatry and the Law at Harvard Medical School. Speckhard emphasizes that psychological vulnerability makes people more susceptible to terrorist recruitment. So many people have emotional wounds from their life experiences, including adverse childhood experiences (ACES). Trauma-informed mental health care that is systems-oriented is a critical need as a prevention tool when it comes to terrorism recruitment.

Speckhard’s theory, based on over 700 in-depth interviews of what makes a terrorist, involves what she calls the “lethal cocktail of terrorism.” There are normally four necessary and sufficient ingredients in the lethal cocktail of terrorism: an established group, an ideology justifying violence against civilians, social support for both, and motivations and vulnerabilities on the side of the individual. A vulnerable person is first given attention and support from the group which is already capable of providing an ideology in support of violence, key materials and targetting. Social support and encouragement (in cult recruitment this is called “love bombing”) can come through the internet, giving the person a sense of belonging and protection. By the time the ideology is fully revealed, the recruit has become dependent on the group. Frequently, the actual goal of the recruitment is hidden or misrepresented. Speckhard noted that some people went to Syria expecting to help victims of Assad or to take part in an Islamic utopia, but once there the men were forced to become fighters for ISIS.

Radicalization also happens in prison settings. I have often said that prisons are a “petri dish” for all kinds of destructive ideologies. Speckhard agrees and says that she is currently writing a book about a U.S. FBI informant that spent 8 years in federal prison posing as a jihadist. He reported that many fellow prisoners had come to him saying they wanted to convert to Islam after which many ended up taking on jihadist thinking. The appeal was the sense of belonging and the perception that they would be joining a powerful and huge block of prisoners that looked after each other.

ICSVE has begun to gather data on white supremacist organizations, with 50 interviews to date. These organizations engage in a process ICSVE researchers have named “directed hate.” Antisemitism is the most consistent feature of these groups. Directed hate supports the idea of elitism with skin color and heritage being considered superior. Those who are eligible to join based on skin color and heritage gain a sense of belonging and significance, perhaps even noble purpose. But the emotional cost is obedience to the group and the constant hatred of the “enemy” (Jews, minorities), often even without actually knowing someone from the enemy group. People need to look carefully at who benefits from the recruitment. Who is profiting from sowing discord between groups of people?

Rehabilitation of Ex-Members of Terrorist Organizations and Cults

One of the most effective tools for counter terrorism speech is counter-narrative videos in which actual former members denounce the group as violent, life crushing, corrupt, unIslamic, etc. They can also be useful in supporting exiting such groups. For white supremacists and cult members who are not facing prosecution, stories of people who have left the group provide inspiration and proof that it is possible and there is life after leaving the organization. When people have been seduced by lies and propaganda, they feel isolated and ashamed. These stories help reduce that feeling and contribute to the healing process.

In the case of ISIS specifically, preventing further radicalization in the camps where most of the wives of ISIS members and their children are held is very complicated. Letting them languish in the camps leads to re-radicalization of some. Children growing up in these camp/prison situations are especially vulnerable to radicalization. Boys are often taken away from their mothers by the age of 12 and put into detention situations. When they are 18, they are put in prisons with the male ISIS members Many different nationalities are represented; the laws of their countries of origin vary greatly. Many countries do not want to repatriate any citizen who became an ISIS member or supporter. Deradicalization programs exist but need also to be applied for those left in Syria.

Speckhard and I both advise a compassionate approach to cult members. Making fun of them or being unkind only reinforces their indoctrination. I often tell the story of a man who was kind to me when I was still in the Moonies. It was a hot day and this man bought me a drink. While that act of kindness didn’t immediately change my position, it planted a seed. Speckhard describes the Kurds’ approach to terrorist prisoners. In essence, they say, “You’re a human being, just like me, but we were on different sides. Hopefully now that you landed here in prison, you realize you were wrong, and we can move on.” The conditions in the camps are bad, but the Kurds aim for kind treatment given overcrowding and understaffing challenges.

Everyone can play a role in lowering the temperature in our public discourse and helping reduce the vulnerabilities that lead to involvement in terrorist activities. Advocate for increased and readily available mental health services. Pressure school systems to include teaching about terrorist and violent extremist ideologies and groups that kids are likely to encounter on the internet and may fall prey to. Teach how to understand undue influence. Push legislators to enact regulations and fund programs that counter hate speech and the proliferation of disinformation on social media. Advocate for the prison system to provide practical and appropriate rehabilitation. Most important of all, be kind and treat others as you wish to be treated!