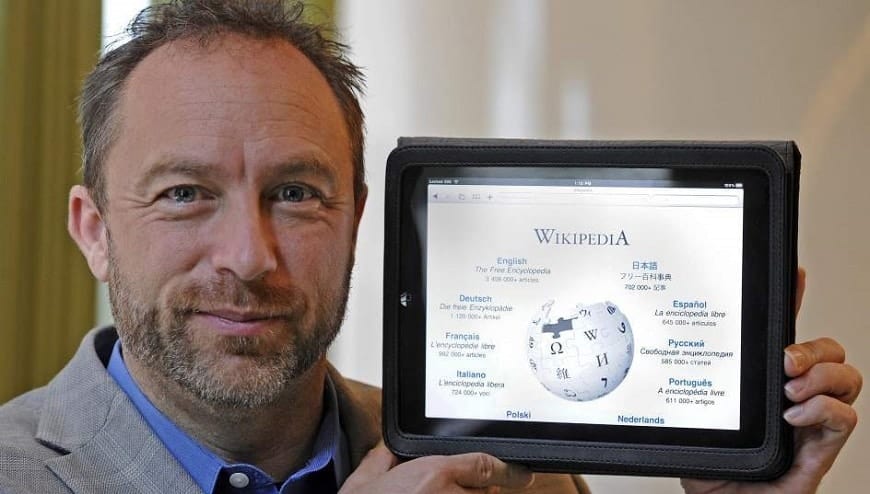 Jimmy Wales in 2017, Founder of Wikipedia

We have been living in the Information Age, the Knowledge Age, with access virtually 24/7 to anything and everything. Many in today’s world go to Wikipedia to learn about cars, animals, medicines and even cults. And that is okay. For the most part, Wikipedia is fairly reliable. With over 20,000 new entries added every month, it no surprise that YouTube, Facebook, and Google rely on its content.

We are now living in the Age of Influence.

With the revelation that up to 87 million Facebook users may have had their profile information scrubbed by Cambridge Analytica, so much detailed information now lives- probably on the dark web– the part of the internet not seen by Google and other mainstream search engines. Russia and possibly other government and private intelligence agencies are in an unprecedented position to know how to “push the buttons” to motivate people to do much more than buy a particular food product or automobile. We are influenced by “fake news.” Fake news is being spread more quickly than its trustworthy counterpart. And it appears that Wikipedia is now being asked to help stop disinformation.

A recent WIRED magazine article entitled Don’t Ask Wikipedia to Cure The Internet discusses “disparities that result in real consequences both for the kind of content that ends up on Wikipedia, and how it’s written. While it presents itself as a source of facts, articles can have their own slants.” So, you cannot always trust many things you read online without doing due diligence to look for facts from trustworthy sources.

Trustworthy or Unreliable: Can You Tell the Difference?

By design, Wikipedia has a current system in place regarding how an editor needs to quote a reliable source. Wikipedia has a policy in place that if it can be shown that an editor is doing untruthful, irresponsible entries then they can lose their status as an editor. Importantly, people can sign up for the proper training to become editors. Therefore, if you are a responsible activist, then learning to become an editor and putting up trustworthy information with reliable source references is very important.

The even bigger risk is how wealthy high control groups, cults, use web savvy true believers to manipulate information and facts to harm critics and ex-members and to promote their own websites and agenda. Often the entries ring of truth but are slanted just enough on a pro-bias or omit any critical facts. And it can be hard to recognize off-hand that the information has been manipulated. One important check is that the group entry can be checked on how it was changed over past years.

One example is how Wikipedia describes my former cult group, the Unification Church (The Moonies). The entry is not written from a neutral point of view (recently mentioned on the top of the page by Wikipedia) but from an apologist standpoint. It describes it as not being a religious group with any structure or organization and wrongfully states Moonies are pacifists and peace lovers. Really? Not religious when they believe Moon was the Messiah? Peace lovers when Moon’s son owns a machine gun factory and another son just did a blessing and told members to come with their AR-15 rifles? The Unification Church page then disparages critics, such as myself, as incorrectly stating that the group brainwashes members. Yet, I was a member and experienced this firsthand. Sociologist Eileen Barker is a cult apologist and made her career stating the Moonies do not do brainwashing or any type of mind control.

They also put up cult apologist disinformation regarding the legal system and do a big lie about the APA rejecting the idea of brainwashing, which they never did. The facts are plain, but unless you know them, you are in the dark. In fact, as I have written, the American Psychiatric Association’s book the DSMV, has a category under Dissociative Disorders 300.15 that explicitly talks about coercive persuasion, brainwashing, and cults. The Unification Church entry has dozens and dozens of errors. The issue is that former members do not have the time or money to keep up the battle year after year.

Another example is that of Jehovah’s Witnesses. When you first read the information about the group, it seems very detailed and factual. However, there are items missing and slants presented about some of their dangerous practices. One such practice is that of shunning. Shunning is a form of bullying and is psychologically damaging, especially when one is cut off from all support from the friends and family they have ever known. Yet, Wikipedia says this, “The practice of shunning may also serve to deter other members from dissident behavior.” It simplifies and justifies this dangerous practice.

This cannot be further from the truth. The deceptive recruitment begins from the first moment when people are not told that the New World Translation of the Bible, published by Watchtower, is not accepted by any Jewish or Christian theologians as accurate. Recruitment is high pressure to conform using the fear of the imminent threat of Armageddon. People are not told about the trauma of being shunned if leadership says you are “out.” So many people are raised in the group and have no ability to make an informed choice until they are in their late teens.

If not careful, one may read the entry on Jehovah’s Witnesses and simply come away with the idea they are a safe religion with their own set of beliefs rather than learning how they control behavior, information, thoughts, and emotions and are a dangerous, high control group. (see BITE model)

What can be done? Do we need to avoid Wikipedia? No, not at all. In fact, it is still a place to go for preliminary research on a person, activity, or even group. But beware. Click on the references. Look for fact-based, reliable unbiased information. When there is original source material, such as Master Speaks (Moon’s own words, recorded, transcribed and published by the group), it is important. When the group says it is not translated properly, then ask yourself, why did the group translate it improperly? Or maybe it was a proper translation but makes Moon look sick and mentally deranged? Look for other resources.

And if you are an ex-member of a high control group, please consider visiting the Wikipedia entry on your former group. Report any mistakes or bad information. Provide links to fact-based sources. And if you are a Wikipedia editor, take time each week to correct any misinformation.

While we have access to a greater amount of information thanks to the Internet, we have to use our reasoning and research skills to be able to identify when information is wrong so that we are not manipulated by untrustworthy facts and misinformation.