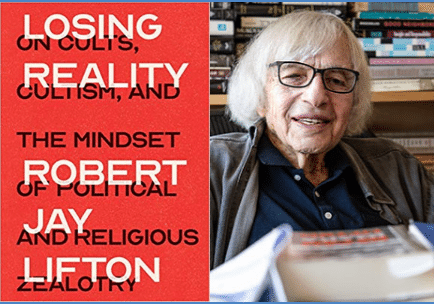 I am excited to blog about and share my latest interview with my first mentor, Dr. Robert Jay Lifton, about his new book, Losing Reality: On Cults, Cultism, and the Mindset of Political and Religious Zealotry. In this unique and timely volume, Dr. Lifton proposes a radical idea: that the psychological relationship between extremist political movements and fanatical religious cults may be much closer than anyone thought. Exploring the most extreme manifestations of human zealotry, Lifton highlights an array of leaders—from Mao to Hitler to the Japanese apocalyptic cult leader Shōkō Asahara to Donald Trump—who have sought the control of human minds and the ownership of reality. Dr. Lifton played a most significant role in my life work as a cult expert, by encouraging me to go back to college to study psychology and apply what I experienced to help others.

He is a National Book Award-winning psychiatrist, historian, public intellectual, author and a leading authority on the nature of cults, political absolutism, and mind control. He has taught at Yale University, Harvard University, the City University of New York, and is currently Lecturer in Psychiatry at Columbia University.

His 1961 book, Thought Reform and the Psychology of Totalism: A Study of “Brainwashing” in China, was instrumental in my deprogramming from the Moon cult in 1976. Dr. Lifton has written over twenty books (see list at the end) including his latest definitive account of the psychology of zealotry. It is a volume that summarizes many of his most significant research topics which he helped to explain to millions of people the world over. In this time of China’s increasing power and influence, I encourage all people who are concerned about China’s re-education programs, aimed as thought reforming millions, to learn about the methods of cult mind control. Indeed, a dictatorship political system can be viewed as a destructive cult by applying the BITE model, which was developed based on researchers’ models of Chinese brainwashing such as Lifton, Margaret Singer Ph.D., Louis Jolyon West M.D. and Edgar Schein Ph.D..

Lifton has spent decades exploring psychological extremism. His pioneering concept of what he now calls the  “Eight Deadly Sins” of ideological totalism—originally devised to identify “brainwashing” (or “thought reform”) in political movements—has been widely quoted in writings about cults, and embraced by members and former members of religious cults seeking to understand their experiences. These criteria are:

For a more complete explanation of these 8 criteria, please see this blog. Dr. Lifton explains his change from using “Eight Criteria of Thought Reform” to “Eight Deadly Sins” during our video interview. I must admit that after 43 years of calling them the Eight Criteria, it might take me a while to start getting used to calling them the 8 Deadly Sins.

In his book,  Losing Reality, Lifton makes clear that the apocalyptic impulse—that of destroying the world in order to remake it in purified form—is not limited to religious groups but is prominent in extremist political movements such as Nazism and Chinese Communism, and also in groups surrounding Donald Trump. Lifton applies his concept of “malignant normality” to Trump’s efforts to render his destructive falsehoods a routine part of American life. But Lifton sees the human species as capable of “regaining reality” by means of our “protean” psychological capacities and our ethical and political commitments as “witnessing professionals.”

Lifton weaves together some of his finest work with extensive new commentary to provide a vital understanding of our struggle with mental predators. Losing Reality is a book not only of stunning scholarship but also of huge relevance for these troubled times.

Praise for the Book

“One of the world’s foremost thinkers on why we humans do such awful things to each other.”
—Bill Moyers

“In this distillation of a lifetime of scholarship and wisdom, Lifton delineates the psychology of
fanaticism, from isolated cults to vast totalitarian systems. A treasure for our time.”
—Judith Herman, author of Trauma and Recovery

“At the core of this work is the problem of the ownership of our minds, a problem thrown into
relief at those historical moments when it is challenged—by ideology, totalitarian politics,
disinformation, cults, even social media….Required reading for a necessary conversation.”
—Sherry Turkle, author of Reclaiming Conversation: The Power of Talk in a Digital Age

In the following interview, we discuss the current political climate with the recent assassination of Soleimani and the universal anxiety of the world. In addition to Trump’s cult-like behavior, Lifton describes Trump as being “solipsistic self-involved” so that every reality he entertains comes exclusively from the self: from what the self experiences to what the self needs. He can block out all reality from around him. That, along with a paranoid cast, is a really dangerous combination and, in a way, rules out for him the possibility of diplomacy because diplomacy involves a certain amount of self-negation in the service of one’s country’s interests and security and in the service of peace. But if you are functioning only from the isolated experience of the self, together with its paranoia, there is no possibility for diplomacy and that is the way Trump acted in that assassination.

We go on to discuss his new book, additional concerns about Trump, and what we can do to make a difference. This is an interview that everyone needs to watch. 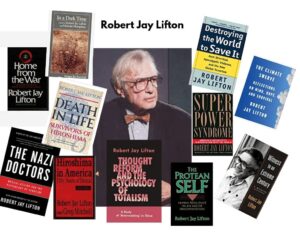