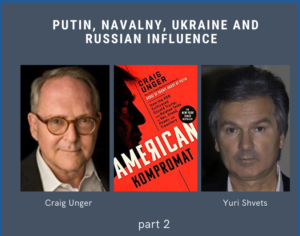 This is Part II of my recent conversation with Yuri Shvets and Craig Unger about American Kompromat: How the KGB Cultivated Donald Trump, and Related Tales of Sex, Greed, Power, and Treachery. Part I focused on KGB cultivation of Donald Trump as an asset and Russian influence in the 2016 US election. In our conversation, both Shvets and Unger emphasized that the United States government needs to engage in counterintelligence based on the updated understanding of Russian operations. This would include tighter regulations on lobbying on behalf of Russia and more accountability for real estate and other business transactions that may support money laundering. Some modest changes have been proposed through the Corporate Transparency Act, but these regulations will not be sufficient.

Former KGB agent Shvets is clear that Russia will only respond with an “iron fist in front of their nose.” Recent actions of the Biden administration and statements from President Biden indicate that he may already understand this. In an interview on ABC in March, President Biden stated that Russia would pay for interfering in the 2020 elections and admitted that he believed Mr. Putin was a “killer.” In April, Biden announced sanctions for Russia’s hacking of the 2020 elections and expelled Russian diplomats. Russia responded by expelling 10 US diplomats. Russia has a large troop buildup on the border of Ukraine.

Putin’s State of the Nation Address

Putin’s speech on April 21, 2021, delivered a clear message. He tried to portray Russia as having good intentions, not wanting to burn bridges. However, Putin suggested that some countries pick on Russia for no reason, just for sport. Any country that thinks Russia is weak and tries to threaten its security interests will suffer “asymmetrical, rapid and harsh” reactions. Putin accused some countries of making attacks on Russia to please the United States.

In my interview with Shvets and Unger, we explored information that helps explain Putin’s view of Russian interests and his place in protecting those interests. Putin sees himself as having a special role as leader of a reborn Russian nation, standing against the hypocritical and morally decayed West. Shvets talked about how Putin’s health is in decline and there are powerful Russians who may be waiting for their chance to unseat him.

KGB Operations and the Rise of Putin

Most people speak of the KGB as if it was a singular organization. In fact, Shvets explains, the KGB was comprised of separate departments, much as if the CIA, the FBI, Homeland Security, and the Department of Justice were all under the same roof. Shvets worked for the KGB intelligence division (the Russian equivalent to the CIA).

Vladimir Putin worked in what was called the Fifth Chief Directorate. This was the division in the KGB responsible for dealing in the Soviet Union with political opposition, artistic expression, and academic activity that was considered a threat to the party line. In short, the “secret police.” This is the branch of the KGB that would have been responsible for the persecution of prominent Soviet scientist Andrei Sakharov and author Aleksandr Solzhenitsyn in the 1970s.

Putin worked for the KGB in Dresden, East Germany when the Berlin Wall fell in 1989. Putin waited for orders from Moscow regarding what the KGB could do in response to the anti-Communist demonstrators. He never received an answer.

Putin felt this was a clear message that the Soviet Union he believed in and served in the KGB no longer existed. In 1991 he returned to the USSR, left the KGB, and eventually ended up as an aide to President Yeltsin. In 1998, President Yeltsin appointed him as director of FSB, the agency that had replaced the KGB. Just a year later, Yeltsin made him prime minister. On New Year’s Eve, 1999, President Yeltsin resigned and appointed Putin as his successor.

From Overt Warfare to Influence Operations

The type of overt persecution that characterized KGB secret police operations against Russia’s enemies, both in-country and abroad, has escalated over the past four or five years. In 2015, Boris Nemtsov, head of the opposition to Putin, was killed near Red Square, just outside the Kremlin. In 2018, GRU (Russian military intelligence service) went to Britain and poisoned Sergei V. Skripal and his daughter, Yulia. Skirpal was a former GRU operative who had been convicted of spying for the British. He had served time in prison in Russia before being traded in a spy swap with Britain.

Attorney Alexei Navalny, one of Putin’s most outspoken critics, was poisoned by a Soviet-developed chemical agent called Novichok. Navalny has been arrested and moved from prison to a hospital, and reportedly near death. He had undertaken a hunger strike as a protest against the lack of appropriate medical treatment. Thousands of Russians were protesting in support of Navalny. The news is that Navalny has ended his hunger strike now.

Putin is currently serving his second consecutive six-year term as President. Russia’s constitution would have required him to step down in 2024. However, a referendum held in July of 2020 included changes that would allow him to run for two more terms. Whether he will run in 2024 is not yet clear. In any event, given the current trajectory of Russian politics and foreign policy, it is probable that attempts to interfere in US affairs will continue—either under Putin or his replacement.

Shvets says it is vital to realize the difference between the classic Cold War and current Russian influence attempts. While Russia still postures with threats of nukes and rockets, Shvets doesn’t think they would push the “red button.” The central focus now is intelligence operations—deception and corruption. The power elite in Russia has access to lots of money, and they are using it to “buy out” the Western elite. Shvets calls this “Schroderization.” Gerhard Schröder was chancellor of Germany from 1998 to 2005. He improved the country’s social security system and angered G.W. Bush by not joining the invasion of Iraq. But when he lost the election to Angela Merkel, he began working for the Russian energy industry. He defended his friend, Vladimir Putin, and referred to him as a “flawless democrat.”

Cultivating business and political leaders is going on in Britain, the United States, and most other democratic countries. It is what was done with Donald Trump. Russia, Shvets says, wants to do this on a massive scale. They want to corrupt the entire American political and business elite.

Accompanying that effort is using social media to sow fear, distrust, and division throughout the country. Russian influence operators are becoming more and more skilled. Russian trolls and bots have gotten better at impersonating candidates and parties. Instead of creating fake groups on social media, they are appropriating the names of already established American groups and creating logos that are almost identical to those used by legitimate groups. Social media viewers can easily be confused and get drawn into deceptive sites.

Is Russia Through With Donald Trump?

I asked Shvets his opinion about Trump and his relationship with Russia at this point. Is he still useful to Russia or is he a threat? If he faces criminal charges and, in light of the civil lawsuits already filed, might he seek to cut a deal? Shvets said that Russia is probably just waiting to see what will happen. But since Russia is invested in creating chaos and shredding the social and political fabric of the United States, Trump might still be useful. The Russians, Shvets said, might even put him on the payroll by authorizing him to build a Trump Tower in St. Petersburg or Moscow!

The American Public Should Be More Aware of Russian Influence

Unger, Shvets, and I are frustrated that there has not been sufficient mainstream media coverage of his book, American Kompromat, as well as mine, The Cult of Trump, given the critical need to develop more effective counterintelligence measures to deal with Russian influence. Unger has gotten quite a lot of interest in other countries, including Russia, Great Britain, and Israel. I would encourage anyone concerned with this issue to read our books and become more educated about the serious problem of covert influence.

A Final Thank You

I want to acknowledge the bravery and courage of Yuri Shvets and Craig Unger for courageously speaking the truth. I previously did an interview with journalist Kseniya Kirillova about Active Measures, Russia, Trump, Propaganda and Disinformation.  Courageous whistleblowers are the vanguard of the effort to save our democratic way of life and preserve human rights. The health and well-being of our children and grandchildren, indeed the very survival of our planet itself, hangs in the balance. Thank you!