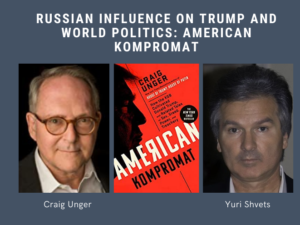 My usual practice is to interview one person at a time and prepare a blog post based on that interview. But the opportunity to have a conversation with two people possessing such a depth of knowledge and personal experience was wonderful! The amount of information on Russian influence that came from our conversation requires more than one post.

Part I will focus on KGB cultivation of Donald Trump as an asset and Russian influence in the 2016 U.S. election. Related information on other individuals and groups that may have been targets of Russian recruitment will also be provided.

Part II will explore current influence efforts by Russia on the U.S. and international stage. Possible scenarios regarding Russian internal affairs and thoughts on US next steps will be addressed, as well.

As I explained in my book, The Cult of Trump, Russian influence was a major factor in Donald Trump’s presidential win in 2016. During his four years in office, Trump consistently praised Putin and Russia. At the Helsinki Summit in 2018, Trump publicly endorsed Putin’s version of events despite contrary information provided by US intelligence. Trump also met with Putin in Helsinki without aides or note-takers present, which is contrary to accepted protocol. Prior to the G20 Summit in Japan, Trump was asked by a reporter if he would tell Putin to stop interfering in US elections. His response was that what he talked about with Putin was “none of your business.”

I am frequently asked whether there is still a cult of Trump. My answer is yes. Anyone who continues to believe that the 2020 election was stolen or that Trump was not subjected to Russian influence remains under the spell of lies and deception that characterized the last Administration.

Craig Unger has been a professional writer for over 50 years. He is the author of numerous books including American Armageddon, and House of Bush, House of Saud. His latest book, American Kompromat:How the KGB Cultivated Donald Trump and Related Tales of Sex Greed Power and Treachery, was released in January of 2021. Unger characterizes American Kompromat as the first richly detailed narrative of how the KGB recruited Donald Trump.

Yuri Shvets is a former KGB agent and author of the book, Washington Station: My Life as a KGB Spy in America. After the U.S.S.R. collapsed, he moved to the United States. Shvets is the equivalent of “deep throat” who knew the real story about Nixon and Watergate. Yuri Shvets is a credible expert on the KGB and was major source of information for American Kompromat.

“Kompromat” is the Russian word for compromising information collected for use in blackmailing, discrediting, or manipulating someone, typically for political purposes.

Concern that Trump was under Russian influence was expressed by many high-level, powerful people. John Brennan, former Director of the CIA, and James Clapper, former Director of National Intelligence, were two of them. Robert Mueller’s report fell short of establishing a conspiracy between members of Trump’s campaign and the Russians. However, the Moscow Project identified 272 known contacts and 38 known meetings between individuals involved in Trump’s campaign, his family members or close associates and known Russian operatives. Former Attorney General William Barr made every effort to withhold the complete 448-page Mueller Report from the American public, offering a four-page summary instead that was not an honest report. Trump consistently referred to the investigation as a “witch hunt.” However, all one would need to do is read the executive summaries to understand the improper and illegal acts the Mueller investigation uncovered. Over 1000 former Department of Justice investigators said that Trump was guilty of obstruction of justice.

Russian interest in Donald Trump began over 40 years ago. At that time, he was just beginning to establish himself on the New York business scene. Trump was not then entertaining (at least publicly) the idea of entering national politics. Czechoslovakia’s intelligence service and the KGB first took note of him in 1977 when he married Ivana, his first wife, who was a Czech model. In 1980, Trump opened his Grand Hyatt New York hotel. In the course of buying furnishings, he purchased 200 television sets from Joy-Lud Electronics on Fifth Avenue. The store was co-owned by Semyon Kislin, a Soviet émigré. Yuri Shvets identifies Kislin as a spotter agent for the KGB. His role was to spot potential assets and open the door for further recruitment.

The Soviet Union was extremely interested in connecting with American businessmen at that point in the Cold War. The KGB was not looking for official spies, but for businessmen who might be interested in a mutually beneficial relationship with Russia. Armand Hammer, CEO of Occidental Petroleum, was recruited in this way. He was given incredibly lucrative franchises within the Soviet Union. That was the sort of relationship that the KGB was seeking with Donald Trump.

In 1987 Donald and Ivana Trump visited Moscow and St. Petersburg. Although Shvets was not involved with entertaining Trump on that visit, he is familiar with the process from his own experience. The KGB would have done their homework well, learning that Trump was essentially interested only in himself and extremely vulnerable to attention and flattery. The KGB would have engaged in a “charm offensive” with Trump. Shvets speculates that they may have even flattered him with the idea that he should really be president of the United States.

A great deal of speculation has occurred over whether any attempts to gain kompromat on Donald Trump involved sexual activities. Unger states that without adequate proof he is not going down that road. However, it is an open secret that American businessmen visiting in Russia would often have attractive women show up at their hotel room and engage in sexual activities. Later, of course, a video tape of the encounter would become kompromat!

Unger added that in Trump’s case, it may have happened. But it isn’t necessary to prove sexual misconduct. There were plenty of other ways that Trump appears to have assisted the Russians, including money laundering through real estate deals.

The spider web of Russian influence combined with other authoritarian groups and individuals is complex and far reaching. As I discussed in Cult of Trump and Unger does in American Kompromat, many authoritarian cults and notorious individuals had known or reasonably suspected ties to Donald Trump or key individuals in his Administration. These include right-wing, religious, military and political groups, and individuals such as Jeffrey Epstein and Ghislaine Maxwell.

Jeffrey Epstein’s friend and sometimes girlfriend, Ghislaine Maxwell, was a British socialite and the daughter of Robert Maxwell. Robert Maxwell was a media mogul who died under mysterious circumstances in 1991. He was considered by British intelligence to be working for the KGB and possibly also Mossad. Epstein was also linked to Putin and the KGB. Epstein videotaped hundreds of sexual encounters with his wealthy and powerful friends with women, and I suspect underage girls.

As I wrote in my book, The Cult of Trump, Attorney General William Barr served on the Board of Directors of the Catholic Information Center. The Center is run by Opus Dei, an ultra-conservative religious cult that seeks to establish Catholic orthodox theology as the driving force in national politics. The book discusses the Soviet spy who was high up in the FBI, Robert Hanssen who was a devoted Opus Dei member. Barr knew Hanssen and the investigation into his spying ignored his involvement in Opus Dei, which I personally believe bears re-examination. Barr also served for 21 years on the board of the Becket Fund for Religious Liberty. The Fund is the firm that supported Hobby Lobby in their case refusing contraceptive coverage to their employees. I believe much more will be coming out in coming months that will be important for the public to know.

Numerous other organizations or loose federations of authoritarian groups supported Trump and were influential in his campaign or during his presidency. Further information on these organizations can be found through the links at the end of this post.

Many of these organizations continue to support the claims of a stolen election and are still focused on efforts to destroy democracy and establish an authoritarian, white supremacist government in the United States.

Interference by Russia in the 2016 Election

Russia may have had some success with Donald Trump the businessman as an asset prior to his campaign for president. The prospect of having kompromat on the President of the United States must have seemed a once in a lifetime opportunity. Authoritarian leaders rise to power most easily in times of chaos and uncertainty. Russia engaged in a digital campaign to sow as much division, fear and hostility as possible in the American electorate.

Russian trolls flooded social media, targeting both left and right voters. Postings on Facebook, Twitter and other social media were often designed to discourage voting and focused on swing states. Similar attempts were made during the 2020 election, but the specific goal of keeping Donald Trump in the White House failed. However, Russian influence tactics have become more sophisticated and are still focused on creating and maintaining chaos in the United States. Our discussion on this important subject will continue in Part II next week.