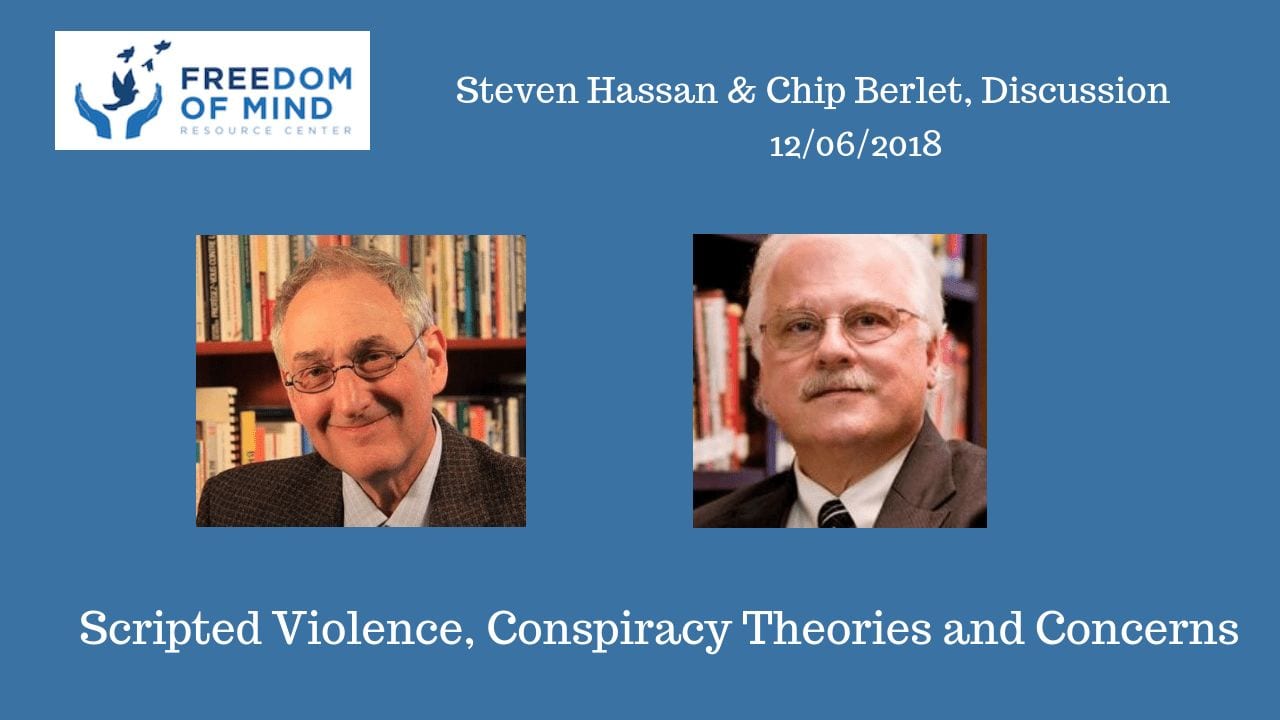 It has been several weeks since Robert Bowers entered the Tree of Life synagogue in his hateful, rage-filled attack against Jews. This week, I had the opportunity to interview Chip Berlet, an investigative journalist, research analyst and scholar of right-wing movements. I had been wanting to interview him so he could explain the concept of scripted violence. This seems to be exactly what took place with Bowers. He had been influenced to hate and fear Jewish people to the point that he acted out and committed a terrorist act. I also wanted to ask Chip about the Protocols of the Learned Elders of Zion, a Russian propaganda tool used to stir up hatred of the Jews around the world, including the United States. He reminded me that carmaker Henry Ford was the main proponent of spreading this Russian propaganda as a bonafide conspiracy theory in the U.S. Chip also talked about other conspiracy theories such as the Obama birther, that autism is caused by vaccinations, that there was no lunar landing and others.

This week is Hanukkah and that Temple has a special reason to light the Menorah. (It is a minor holiday not even mentioned in the Torah with a backstory that I am not proud of, but I always loved the spinning dreidel games, potato latkes, the jelly doughnuts and of course, the presents.) I wrote a blog following the attack with some of my ideas to combat hatred and violence.

Berlet wrote two books. The first, co-authored with Matthew N. Lyons, is Right-Wing Populism in America: Too Close for Comfort, a broad historical overview of right-wing populism in the United States. The second is Eye’s Right! Challenging the Right Wing Backlash about the tea party. Berlet was a senior analyst since early 1982 at Political Research Associates (PRA), a non-profit group that tracks right-wing networks. He has studied conspiracy theories and has appeared often in the media.

Berlet, along with journalist Russ Bellant, has written about Lyndon LaRouche‘s National Caucus of Labor Committees, calling it anti-Jewish and neo-Nazi, urging an investigation of alleged illegal activities. My friend, Yves Messer, is a former member of the LaRouche cult and put up a wonderful website. At the request of the Duggan family, he and I traveled to the U.K. with the hope of speaking at the new inquest that ultimately found he did NOT commit suicide. The British student died in disputed circumstances near Wiesbaden, Germany. Cult leader Lyndon LaRouche ran for President eight consecutive times.

If you are interested in listening to an entire talk Berlet gave on these themes, I highly recommend watching “Trumping Democracy: Conspiracy Theories, Right-Wing Propaganda, and Scripted Violence.”

I would also like to mention an excellent podcast on Conspiracy Theories by ex Scientologist, Chris Shelton.

How Can We Counter Falsehoods & Propaganda?

What can we do in a country that places such a high value on free speech? I think we need to do a much better job of countering falsehoods and propaganda. There are organizations which help to fact check and offer alternative explanations which are much more solid, especially when it comes to state-run propaganda, such as done by Russia and China. But the answer is to use your critical thinking and do research with vetted, reliable sources. Even so, be open to other points of view, as long as they stand up to scrutiny and fact-checking. What you can’t do is just blindly believe anybody or any source.

For example, Factcheck.org is really good. Check out this 2008 article “That Chain E-mail Your Friend Sent to You Is (Likely) Bogus. Seriously” and the November 16th, 2016 article “How to Spot Fake News.” Also, watch this great, short video on evaluating bogusness.

Another site I like to use is Snopes.com. Whenever I encounter something from a questionable source that doesn’t sound logical, I visit Snopes. Also, I subscribe to their daily email which sends the latest stories and explains which are true and which are baseless.

I want to end this blog on a positive note by suggesting my readers check out https://www.gapminder.org. I recently listened to a TED talk given by the Roslings and suggest my readers do so, too. You will be made to realize how ignorant most of us are about the positive things happening in our world. Lastly, check out the book Factfulness: Ten Reasons We’re Wrong About the World–and Why Things Are Better Than You Think.