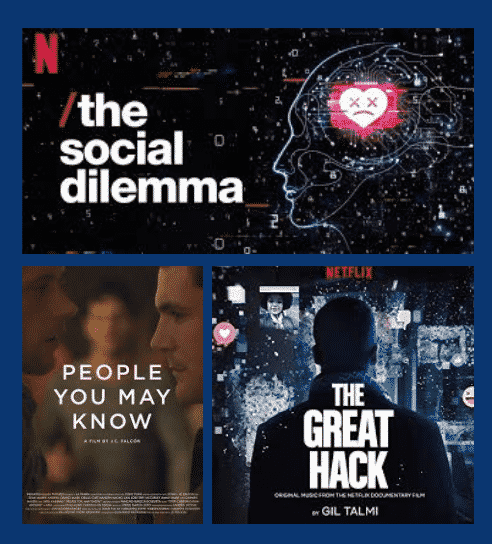 “The Great Hack“, “The Social Dilemma“, and “People You May Know” are three excellent documentaries that everyone must see to understand how modern day authoritarians are recruiting and indoctrinating people to do their bidding. Private and personal information is being harvested and used to create sophisticated psychological and political profiles which allow political and cult groups to target and influence people. I wrote about such groups in The Cult of Trump. Millions of Facebook profiles were harvested for Cambridge Analytica in a major data breach. Facebook users’ profiles were hijacked in order to target the US electorate. This caused intentional political upheaval. The Shadow Network, the book by Anne Nelson on the Council for National Policy, figures mightily. Fourth generation warfare is a psychological warfare strategy designed to delegitimize leaders and institutions and to sow distrust, confusion, disorientation in order to ready people to be mind controlled by an authoritarian leader.

“The Great Hack” (2019) explores how a data company named Cambridge Analytica came to symbolize the dark side of social media in the wake of the 2016 U.S. presidential election. “The Social Dilemma” (2020) explores the dangerous human impact of social networking, with tech experts sounding the alarm on their own creations. “PEOPLE YOU MAY KNOW” (2020) follows Charles Kriel, advisor to a UK Parliament disinformation committee, who discovers Cambridge Analytica is collaborating with a software company on a microtargeting platform for US churches.

I wanted to share the TEDxMidAtlantic program, “The Aftermath of Cambridge Analytica: David Carroll and Brent Allpress” which shows the important role data plays in how our democracies function along with highlighting the risks of influence and manipulation. David Carroll’s story was featured in “The Great Hack” and he was able to get a copy of the data held on him by the UK-firm Cambridge Analytica and shares the actual data file which exposes the deep, personal data being mined and stored on us.

Brent Allpress is a key researcher behind “PEOPLE YOU MAY KNOW”  and he exposes how the Colorado-based firm Gloo, a Cambridge Analytica offshoot, has been illegally using mental health data to target people — including members of the military in multiple countries — for religious and political indoctrination. People are extremely vulnerable to cultic mind control when experiencing a death in close relations, divorce, breakup, losing a job, graduating, moving to a new city, state or country, and this data tells influencers who are “ripe targets” for recruitment. Of course, if it is a religious group, they rationalize and say they are helping people by targeting them for recruitment, but I do not agree. Everyone needs to go to their religious institutions and demand transparency. Is the personal data life situation details being used and given to ANY third parties? Most people have no idea that there are 5000 data points of preferences on every single voting American. Shocking!

Data can be used to manipulate who we vote for, if we vote at all or even into thinking our vote doesn’t matter. Data can pull us into networks of influence that change how we perceive reality itself. Data being mined and stored on us include personality models, psychographics, conscientiousness agreeableness, extroversion model, and others. Based upon certain scores on these, potential targets for specific types of manipulation can be identified.

Watching these will help foster a deeper understanding of how intelligent, educated people can be mind-controlled remotely through social media and through cyber warfare. By design it divides and programs people into black-and-white, all-or-nothing, good-vs-evil mentality. QAnon followers and Trump supporters should especially watch these. One way to do this is for friends and family to invite them over to watch together and then arrange to have a discussion about what is really happening to their minds.

Encourage people to think back to the time before the 2016 election. Where were they at? What were they thinking? By comparing that to now, they can gain insight into how their minds and emotions have been manipulated. Unfortunately, the pandemic and worsening economic problems affecting everyone is making people much more vulnerable to manipulation and radicalization.

What is the solution? Everyone needs to educate themselves about cult mind control, understand the techniques of 4th generation warfare, and learn about undue influence and unethical manipulation. Far more transparency is needed.

Join me for a special TEDxMidAtlantic program for a deep dive into what exactly QAnon is — where it came from, who started it, and why. And most importantly, what we can do to safely slow and reverse the growth of this harmful “mind-virus.”