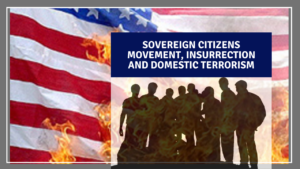 Two recent events have brought increased attention to individuals and groups that adhere to what is known as “sovereign citizen” ideology. A group called “Rise of the Moors” made headlines along with a person arrested for the January 6th attack on the Capitol.

Pauline Bower participated in the assault on the Capitol on January 6th. She has been charged with multiple counts of violent entry, disruptive conduct, and obstruction of Congress. During a June 11th hearing, Bower made claims that are part of a sovereign citizen ideology, saying she is a divinely powered entity not subject to the law because “God gave man dominion over the law.” Bower also claimed that her DNA proved she is not subject to the law because she has ancestors born on this continent before the United States existed.

Bower’s use of these concepts as part of her defense may seem like just a fringe attempt to get out of trouble, perhaps even a little humorous. But the armed standoff on Interstate 95 in Massachusetts over the July 4th weekend is sobering and gives a more accurate picture of the dangers created by the sovereign citizen worldview.

On July 3rd, eleven members of the sovereign citizens’ group “Rise of the Moors” were traveling from Rhode Island to a private site in Maine to engage in “training.” Around 1:30 AM on Saturday, they parked on the side of I-95 in Wakefield, Massachusetts, to put gas in their vehicles. A State Trooper stopped to provide assistance and encountered a group of armed men dressed in tactical gear. He asked for licenses and permits but was told they were “Moorish citizens” and not subject to the laws of the United States. Backup was requested, and an hours-long standoff was the result. While this standoff ended peacefully, violence has often occurred in encounters between sovereign citizens and law enforcement officials as well as the justice system.

The Southern Poverty Law Center (SPLC) produced an extensive account of the development of the sovereign citizen movement, which is based primarily on the teachings of William Potter Gale. Gale was a former member of the John Birch Society and was violently racist and anti-Semitic. During the 1970s, he functioned as a self-proclaimed minister of the Christian identity belief that non-white people are not human and that Jews are behind a satanic plot to take over the world. Fred Koch was co-founder of the John Birch Society. The John Birch Society continues to this day.

Variations on the Theme

While the background of this movement is firmly rooted in white supremacist ideology, in the present time more diverse groups have been formed. For example, the “Rise of the Moors” claim supremacy based on their specific identity but still adhere to many of the conspiracy theories of the original movement.

These conspiracy theories include:

Many individual adherents to the sovereign citizens’ ideology are simply attracted to what they see as a legitimate way of not paying taxes or following laws such as child support orders or traffic regulations.

Some sovereign groups actively recruit. The internet makes it very easy for small-town actors to spread their message widely and gain undue influence over large numbers of people. The “Republic for the United States of America” marketed themselves as Christians who were forming a government to run America. Originating from a small town in Alabama, the group was able to establish chapters throughout the United States.

Another group, the “Superior Court of the Continental United States,” recruited members for an associated group to serve as their enforcement arm. Members of “Continental Marshals for the Republic” make their own uniforms, fake sheriff-type badges, and identification cards.

One of the most common tactics used by sovereign citizens is referred to as “Paper Terrorism.” Frivolous lawsuits may be filed over the most minor of issues (paying a $20 dog license, for example). Voluminous filings consisting of hundreds of pages of fictitious financial documents, real estate deeds, or automobile titles clog up court calendars. Some sovereign citizens also misinterpret genuine documents and forms and engage in various frauds and scams.

As mentioned above, the recent incident involving “Rise of the Moors” ended peacefully. But it is easy to imagine even one simple difference that would have required deadly force, with death and serious injury as a result. These are just two of the numerous violent confrontations between sovereign citizens and the law.

In May 2010, a father and son who were sovereign citizens murdered two police officers with an assault rifle when they were pulled over on the interstate while traveling through West Memphis, Arkansas.

In April 2018, Travis Reinking killed an employee and three customers in a Waffle House in Antioch, Tennessee. In 2017 Reinking had claimed he was a sovereign citizen after being arrested for showing up at the White House and demanding to see then-President Trump.

It may be somewhat difficult to prove formal connections between sovereign citizen groups and other alt-right, so-called “Patriot” organizations such as Proud Boys and Oath Keepers. But the basic worldview of all these individuals, whether they are formally organized groups or simply loose affiliations of like-minded people, is the same.

Sovereign citizens’ ideology was a foundational philosophy behind the January 6th attempted insurrection. Whatever particular affiliation (or none) each individual might claim, these “patriots” considered their actions to be rightful and justified.

Changes in law and government procedures are often necessary. In a democracy this must be done in ways that protect the rights and needs of an increasingly diverse population. Education in positive civic engagement, due process of law, and understanding of the Constitution of the United States should be a part of every school curriculum. The belief that following the law of the land is a valid personal choice is a serious danger to our democratic way of life.